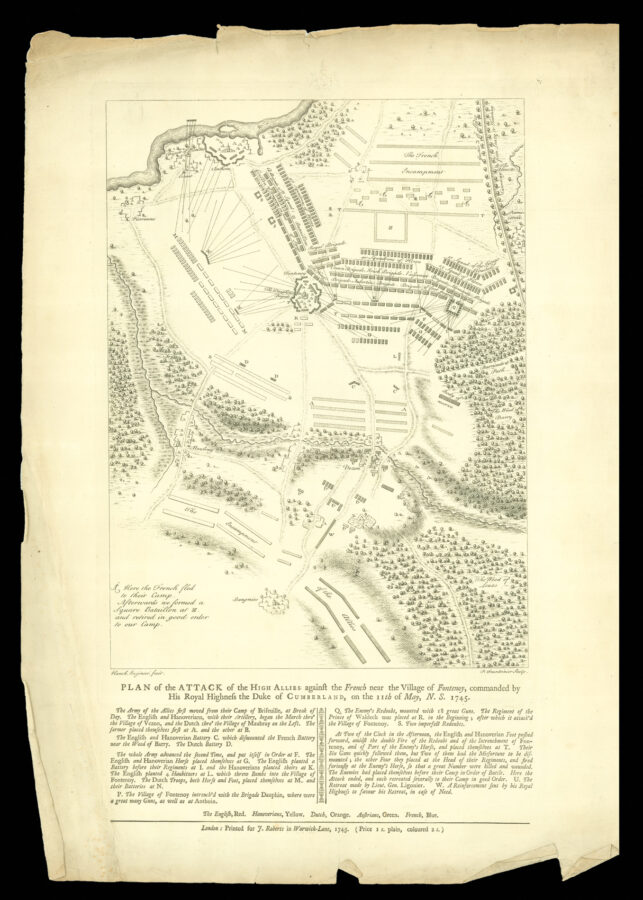 Broadside plan of the Battle of Fontenoy

[Untitled Plan of the Battle of Fontenoy]

Broadside plan of the Battle of Fontenoy (11th May 1745) fought between an allied army of British, Hanoverian and Dutch troops, commanded by William, Dyke of Cumberland and a French Army commanded by Maurice de Saxe.

The battle turned into a brutal encounter; when attempts to outflank the French failed, Cumberland sent the main part of his army into a frontal attack on the centre part of the line. Despite heavy casualties from flanking fire, the column broke through the first line of French defenders but heavy counter attacks, by the Irish Brigade and French cavalry allowed Saxe to concentrate his forces and drive the allied army back. Fortunately for the allies, their regiments maintained their discipline and the retreat was conducted in an orderly fashion, which dissuaded the French from proper pursuit.

While the text on this plan gives a broadly positive view of the outcome of the battle, and while both armies having broadly the same casualties figures for killed and wounded, the allies lost some forty cannons and about 3,500 men captured, but also lost the military aura of gained during Marlborough’s wars. Instead, the balance of war tipped against the allies and within a few months much of the Austrian Netherlands was lost to the French.

Roberts trailed publication of the plan in the Daily Advertiser (issue 4497) for 14th June, 1745 as ​“Next Week will be publish’d …” and on the 21st June (issue 4503) as ​“This Day is publish’d, …”. It is likely that the rarity of this plan, and a rival publication by the Bowles brothers, reflects public disinterest in what was a decisive defeat.