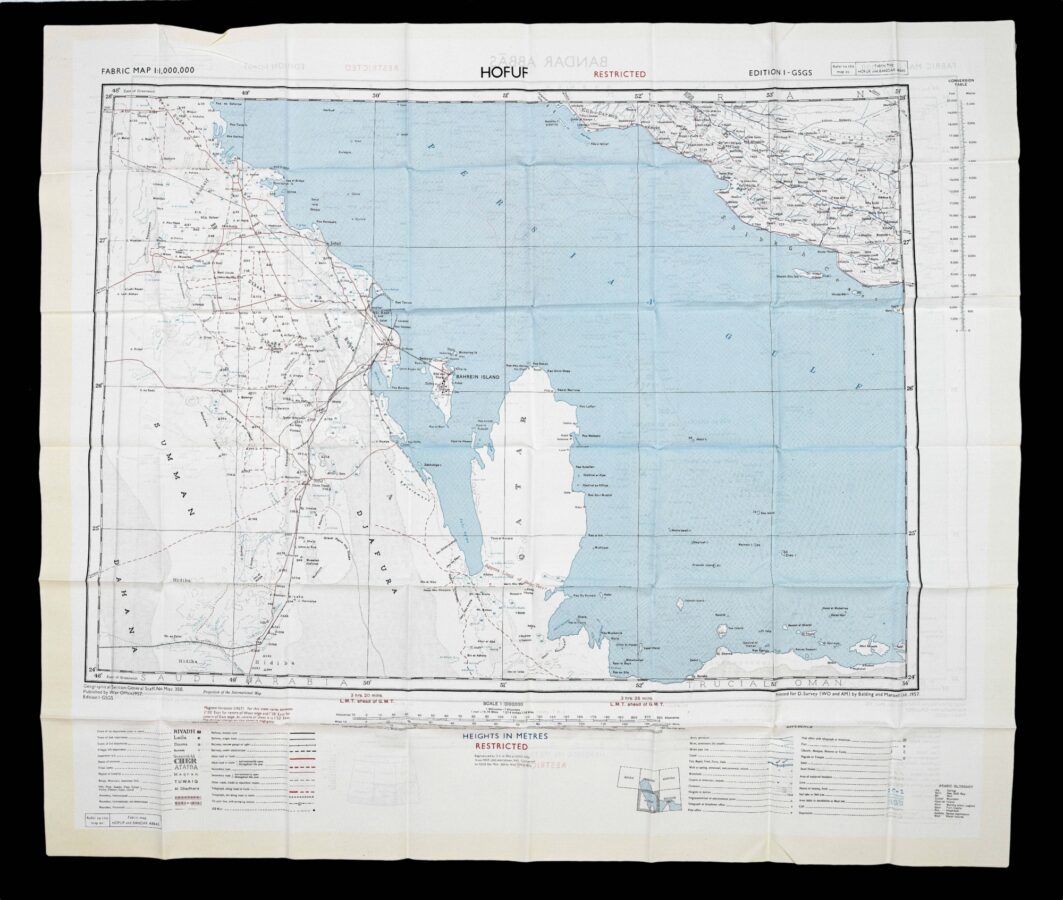 During the Second World War, the British War Office began to produce Escape and Evasion maps for its soldiers and personnel, printed on Rayon acetate. Because of the silky nature of this material, however, which was chosen for its durability and portability, they came to be known as silk maps. The War Office, and later the Department of Defence, continued to produce these throughout the twentieth century, covering many regions across the world.

Published by the War Office in 1957, the present map shows large swathes of what are now the United Arab Emirates, on a scale of 1:1,000,000. To the recto is a map entitled ​‘Hofuf’, which shows the Persian Gulf, Qatar Peninsula, Bahrain Island, part of the north-eastern coast of Saudi Arabia and a small part of Oman. To the verso, is a map entitled ​‘Bandar Abbas’, showing the Persian Gulf, the Straights of Hormuz, the Gulf of Oman and bordering countries. Both maps had first been produced by the War Office in 1945 , and were revised only slightly for use here.
The maps take the standard form of British Escape and Evasion maps, wit relief represented by hachures, altitude tints and spot heights, which height given in metres. Among the significant features shown are borders, highways, important roads, railway tracks, airports, rivers, bodies of water, and telegraph lines. These are identified in keys alongside both maps, where relevant information, such as ​“fresh water”, is emphasised. Alongside these keys, there are other helpful resources for military personnel in the area, whether by design or due to an emergency landing. These include a glossary of Romanised Arabic terms and diagrams placing the region shown in its wider geographical context.

In 1932, Said bin Taimur became the Sultan of Muscat of Oman, his Sultanate stretching down the entirety of Oman’s eastern coast. His reign was supported by the British Government, which maintained significant control over his land, installing its ministers in his government. British interest the area was mainly motivated by the promise of oil, with the Iraq Petroleum Company (IPC) being 23% British-owned, and over the following decades the Sultan and the Company searched the deserts in the hope of striking a new and lucrative deposit. After failing to discover any significant resources within his direct domain, however, Said bin Taimur, with the backing of the IPC, raised an army to occupy the Imamate of Oman, where he hoped to find oil at last.

Thus in 1954 the Jebel Adkhdar War, or Oman War, broke out, as the local Omanis and their leader, Imam Ghalib ALhinai, fought against the combined forces of the Sultanate and the British Army to protect their land from the would-be occupiers. Eventually Arab states including Egypt, Saudi Arabia and Iraq, came to the support of the Imamate, but the war nevertheless stretched on until 1959, when a final effort by. The British SAS brought the conflict to a decisive end. The treatise and agreements signed in the aftermath of the war were heavily weighted towards British interests, giving them trading rights, the islands of Kuria Muria, and extensive power over the Sultanate’s ministries. The Sultanate was thus transformed into a de facto British colony.

The present map, produced in the very middle of the conflict, shows much of the theatre of the Jebel Adkhdar War. It is not entirely clear, however, why the cities of Hofuf and Bandar Abbas, both of which are indeed shown on their respective maps, are selected as the titles for each. Neither seems to have played a role in the war, and in fact, the latter was a small fishing port of about 17,000 people during the late 1950s. They are by no means the only cities to be shown, with a wealth of toponyms covering the maps, and so it remains a mystery why they have been singled out as titles. 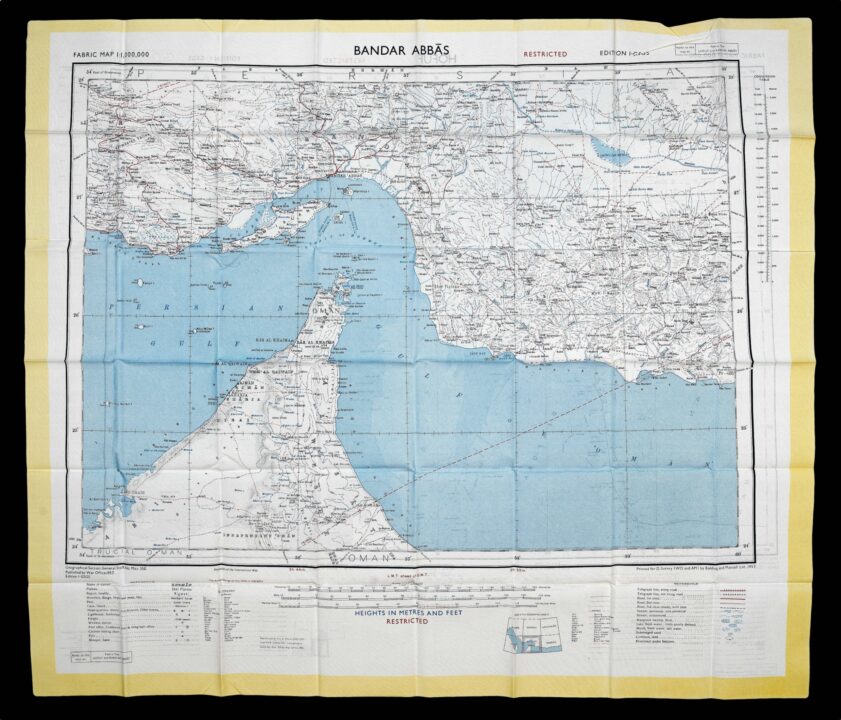