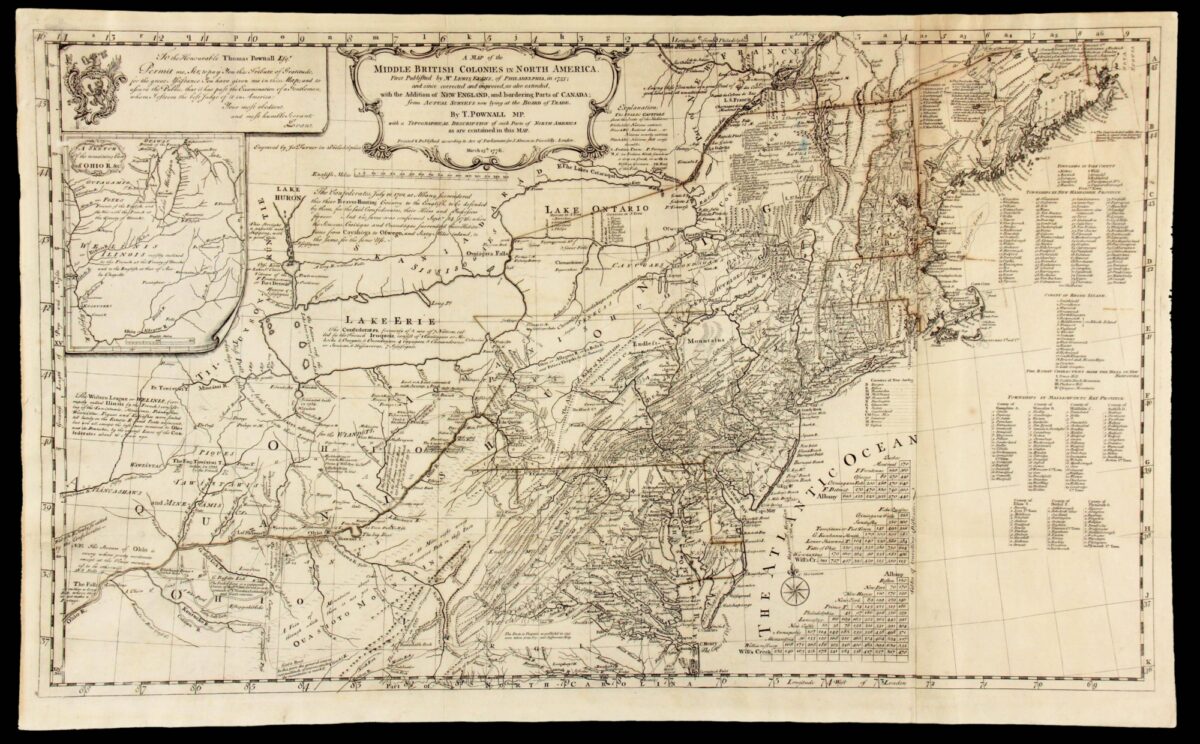 A Map of the Middle British Colonies in North America First Published by Mr. Lewis Evans, of and since corrected and improved, as also extended, with the addition of New England, and bordering parts of Canada; from actual surveys … by T. Pownall …March 25th, 1776

A fine engraved and comprehensive map of the northeastern states of America from the borders with Nova Scotia and New France in the north to Chesapeake Bay in the south, west to Ohio and beyond, from Evans’ original map, and extended to include the coastline by Pownall, with an inset of the ​“Remaining Part of the Ohio R. etc.“

Published in ​“A Topographical Description of Such Parts of North America as are Contained in the (Annexed) Map of the Middle British Colonies, &c in North America”, 1776. This is by far the most important issue of Evans’s map published after his original of 1755 which Schwartz calls ​“the most ambitious performance of its kind undertaken in America up to that time”.

Evans’s was the first to map with general accuracy the trans-Appalachian region and parts of the midwest. Pownall’s was the only subsequent issue of the Evans map to use the original plate. In an unusual piece of cartographic augmentation, Pownall produced a new plate of the northeast that was not on the original Evans plate and appended it.

Pownall, who had been governor of Massachusetts, stated that the New England section of the map was based on new information, ​“later Draughts and Surveys deposited at the Board of Trade” (Pownall). As Stevens observed, Pownall also significantly updated the original plate: ​“the whole of the map east of the longitude of Philadelphia is greatly changed, and is filled in with new details”. Unlike the pirated editions of the Evans map by Jefferys, Sayer, Kitchen and Bowles, Pownall’s was authorized by Evans. In fact, a commendation of the map signed by Evans appears in the upper left-hand corner.