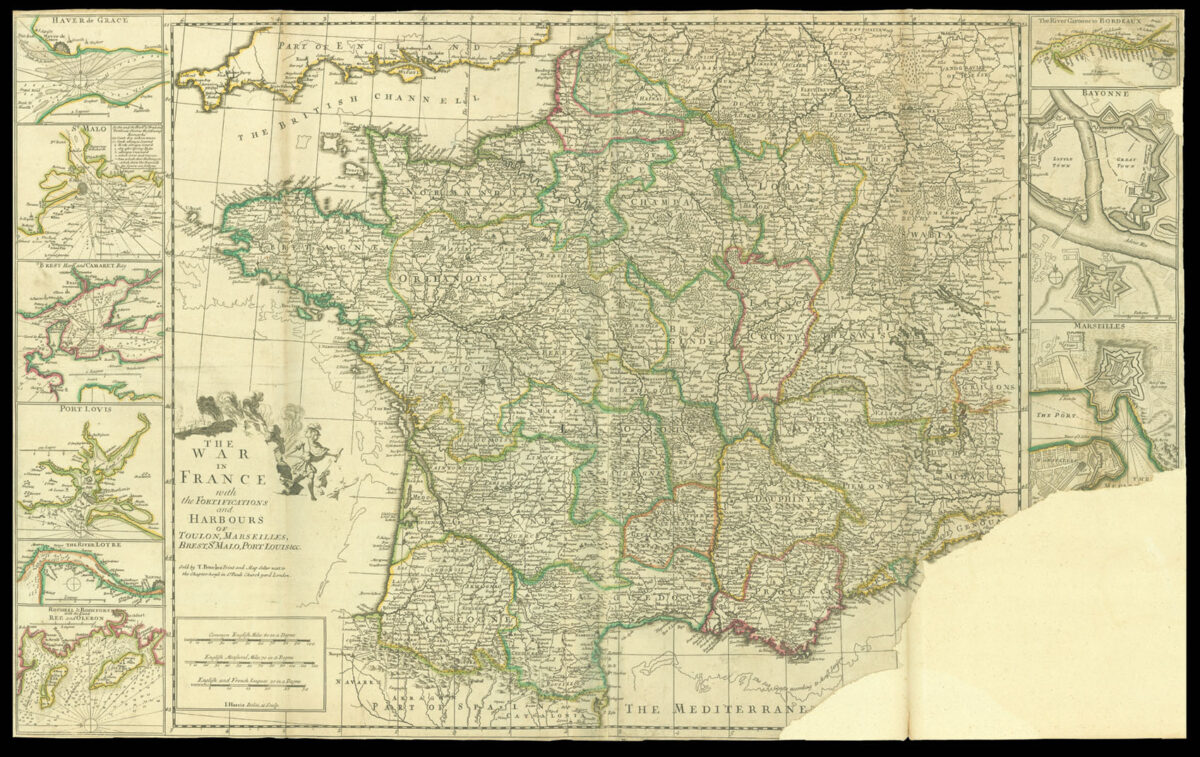 Bowles’ map of France during the War of Spanish Succession

The War in France with the Fortifycations and Harbours of Toulon, Marseilles, Brest, St Malo, Port Louis &c.

A map of France, made during the War of the Spanish Succession. Britain had allied with Portugal, the Dutch Republic and the Holy Roman Empire to combat the threat posed by the appointment of Philip of Anjou, the second son of Louis XIV, as heir to the Spanish throne. Britain and her allies felt that having two Bourbon monarchs on the thrones of France and Spain would disrupt the balance of power in Europe. It is bordered by two strips of views of strategic locations: important French ports like Toulon, Marseilles, Brest, St Malo, Port Louis, Havre de Grace; the Loire and Garonne Rivers; and Île de Re, Île d’Oléron and Bayonne. There is a suitably martial title cartouche, with a solider in classical armour striding away from a burning city, possibly representing the god of war himself. The map was originally issued in 1706 by Christopher Browne (fl.1688–1712), a successful map publisher who was Robert Walton’s apprentice, and and engraved by John Harris. Bowles’ decision to reissue it suggests a continuing interest in the war on the part of the British public.

Thomas Bowles (c.1695–1767) was a prolific map publisher. His father, also called Thomas, was an engraver, and Bowles II took over the family business and established his own print shop in St Paul’s Churchyard in 1712. His brother, John Bowles, also ran a publisher at 13 Cornhill.

The map is rare, and this edition even more so. We have not been able to trace any institutional examples, or any offered at auction. The Christopher Browne edition was offered at Dominic Winter on 16 May 2012.