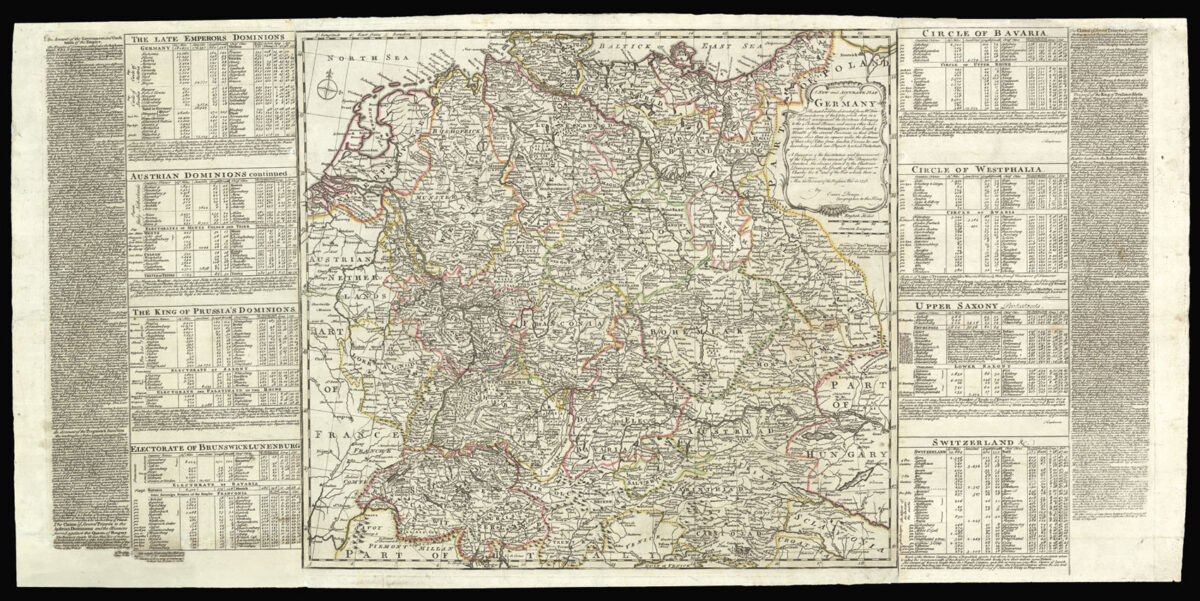 A New and Accurate map of Germany Illustrated with Tables abstracted from Mr Templeman’s Survey of the Globe, which shew in a distinct arrangement the Territories belonging to the 9 Electoral Princes, and many other Sovereigns in the German Empire; with the Length & Breadth of the several Provinces in
their Dominians, their Area in square miles, the distances of their chief Cities from London, Vienna, &c. And describing which are Papists & which Protostants. A Narrative of the Constitution and Government of the Empire. An account of the Pragmatic Sanction, the claims form’d to the Austrian Dominions on the Death of the Emperor Charles the 6th and of the War which then ensued. Also an Account of the Prussian
War in 1756. By Eman. Bowen, Geographer to the King.

This map is unparalleled for its time in the sheer quantity of information it conveys about the geography, demography, topography and history of Germany and the surrounding countries. On 9th March 1758, a notice in The General Evening Post announced that Emanuel Bowen had published a map that was available for the public to purchase at the cost of two shillings. The map itself features the cities, towns, woodlands, hills, mountains and rivers that characterise the landscape. They are represented pictorially and labelled, with the different regions of the country distinguished by colour in outline, as typical of the cartographer’s work. It is presented on a grid, with the latitude and longitude identified in the border. A cartouche in upper right corner houses the title, and below this is found the scale of 20 miles to one inch.
It is the borders of the map, however, which make it unique, providing details of the population, size, constitution, location and sometimes religious inclination of most major states and their chief cities. Bowen took this information from Thomas Templeman’s ​‘New Survey of the Globe’, a compilation of such information published in 1730. Although the historian Edward Gibbon declared that ​“I distrust both the doctor’s learning and his maps”, Templeman’s statistics were influential throughout the 18th century.

On the outer side of these tables, there is an equally detailed account of the history of Germany, or the Holy Roman Empire, beginning with the rule of Charlemagne and concluding with the Treaty of Aix-la-Chappelle in 1748. The miniscule script recounts a narrative of the country with a particular focus on the political and constitutional arrangements that led to the outbreak of the War of Austrian Succession. It explains that in 1713, Holy Roman Emperor Charles VI passed the Pragmatic Sanction allowing land to pass to daughters in the absence of a son. Although probably motivated more by the desire to keep his kingdom within the family than by the concept of female empowerment, Charles’ throne did eventually pass to his daughter Maria Theresa. The ascension was not well received by the surrounding states, giving rise to the war. Bowen records the subsequent battles and concludes his narrative with the statement that ​“no other action of importance happen’d in Germany till the signing of the general and definitive Treaty of Peace at Aix la Chapelle”. This town is depicted on the map straddling the border between Germany and the Austrian Netherlands.

Although other examples of Bowen’s map are held at the British Library, the Newberry Library Chicago and the Sächsische Landesbibliothek, these versions do not include the borders with their copious notes, and we have been unable to trace any other example that does. 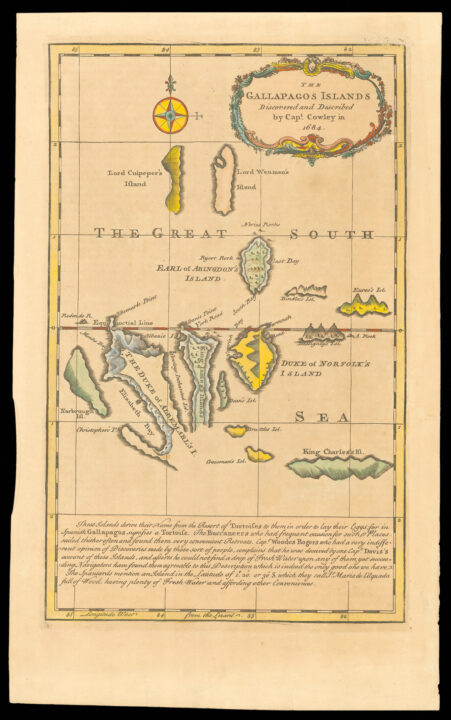 Emanuel Bowen 1744].
The Gallapagos Islands Discovered and Described by Capt. Cowley in 1684.