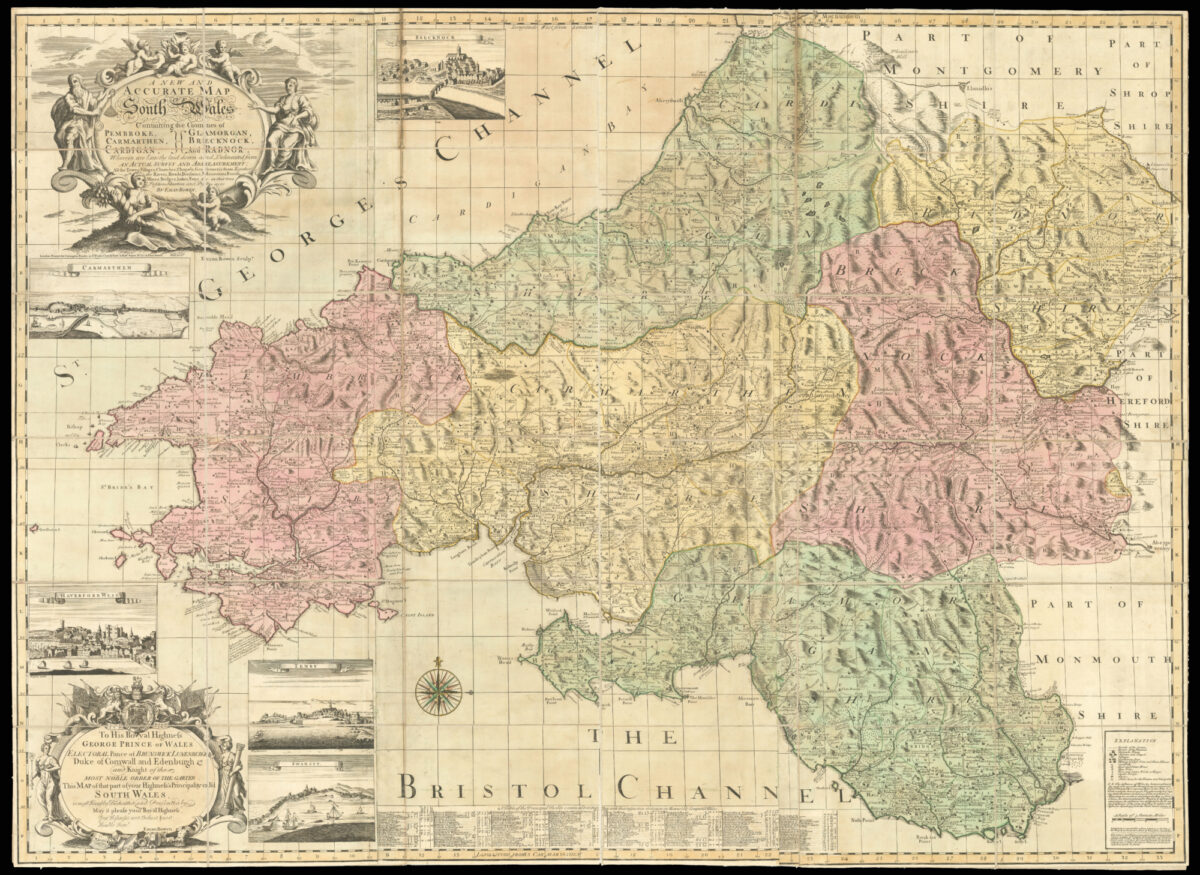 A new and accurate map of South Wales containing the counties of Pembroke, Glamorgan, Carnarthen, Brecknock, Cardigan, Radnor, wherein are exactly laid down and delineated from an actual survey and admeasurement: all the towns, villages, churches, chapels, gentlemen’s seats together with the rivers, roads, divisions, mountains, forests, mines, bridges, lakes, fens &c. In their true position, situation and dystances. By Eman Bowen.

This is the most detailed map of the South Welsh counties available in the eighteenth century, and even into the nineteenth, it was one of the main sources of information for Welsh travellers, land-owners and administrators alike. Although large-scale maps were being made for almost every English county, the Welsh counties generally received less attention individually, and are instead grouped together or depicted on smaller-scale representations. In 1720, Bowen had published an illustrated road atlas, his ​‘Britannia Depicta’, in which he compiled, added to and commented on the British maps of previous cartographers. This atlas included each of the Welsh counties, equipping Bowen with a detailed familiarity of the region. This is evident from his later map of South Wales, which contains a wealth of information beyond routes and roads. Along with the ​“Table of Principal Road”, it includes annotations about the geology of certain regions, labelled settlements, relief represented with illustrated hills, and an ​“Explanation” key which discusses the distances displayed in longitude and latitude.

The map is as decorative as it is informative, with elaborate cartouches, five inset vignettes of important towns, and bold colours used to distinguish the counties. One impressive cartouche in the upper left corner contains the title, while in the lower corner a slightly smaller one presents the dedications, which runs as follows: ​“To his Royal Highness George Prince of Wales Electoral Prince of Brunswick Lunenburgh Duke of Cornwall and Edenburgh and Knight of the most noble order of the garter. This map of that part of your Highness’s Principality call’d South Wales is most humbly dedicated and presented by, may it please your Royal Highness, your highness’s most obedient & most humble servt. Eman Bowen”. Such an extensive dedication demonstrates the importance of the patronage system to cartographers of the eighteenth century. Bowen was a prolific map engraver and publisher, and was appointed to the service of George II of England and Louis XV of France. He worked with his son to produce several county atlases, but ended his days in rather less grand fashion, dying in a workhouse in Clerkenwell.

Roger lists only five institutional examples, and we are able to trace another example appearing at auction in the last 40 years.