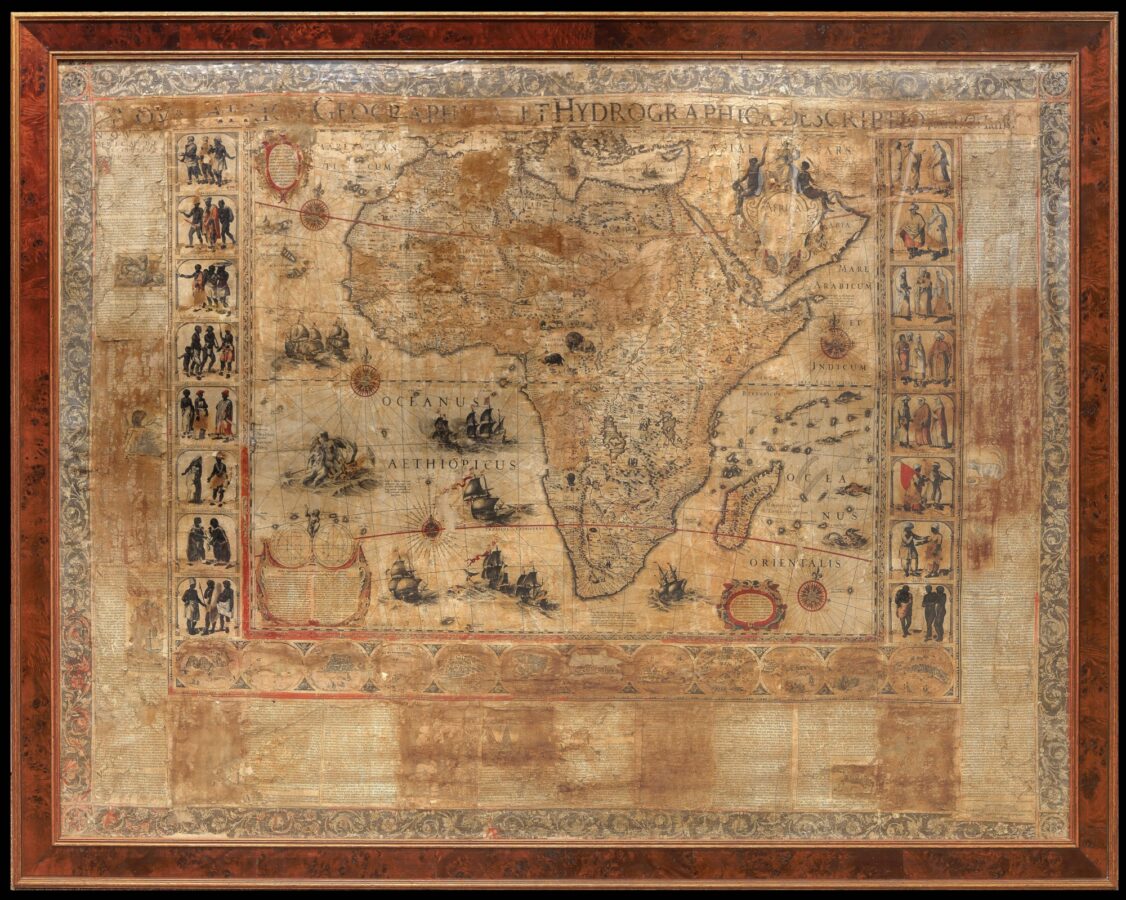 Blaeu’s landmark map of Africa, which was ​“of such importance that for the next 100 years numerous mapmakers throughout Europe… copied [it] in both design and content” (Betz).

The map of Africa depicts the European conception of the continent at the dawn of the seventeenth century, an especially interesting juncture when the coastlines were well-explored, but its heart remained an enigma. Blaeu was influenced by Giacomo Gastaldi’s large map of 1564, which was copied in Antwerp by Cornelis De Jode, as well as Abraham Ortelius’s maps of 1595. He also considered the maps present in Filippo Pigafetta’s book on the Congo, based on the explorations of Duarte Lopes (1591) and the map included in the second edition of Giovanni Battista Ramusio’s ​‘Navigatione et Viaggi’ (1550), in addition to Portuguese sources included in Jan Huygens van Linschoten’s ​‘Itinerario’ (1596).

In west Africa, Blaeu depicted territorial divisions similar to Gastaldi and Ortelius, labelling both Barbaria and Libya Interior. The Niger and Senegal Rivers combine to flow into the Atlantic as one great system, with an apocryphal Lake Niger being the source for the latter. The great entrepot of Tombotu (Timbukto) is shown and the Gold Coast is based on a map by Luis de Texiera, which found its way to Amsterdam in 1602. Central Africa is derived from Ortelius and Pigafetta, and South Africa is updated by the inclusion of Dutch nomenclature, like ​“Mossel baij”, from the work of Cornelis De Houtman (1595–97). The southern interior is based on Portuguese sources, with the frontier fort ​“Cast[ellum] Portugal” labelled. The heart of the continent, at this point entirely unknown to Europeans, is derived from the ancient maps of Ptolemy. It shows both the sources of Nile and Zambezi Rivers as being lakes on other side of the mythical Mountains of the Moon. Abyssinia is taken from Ortelius’s imaginative maps of the legendary Christian kingdom of Prester John.

The map is lavishly decorated, with four cartouches, one playfully adorned with a monkey. Sea monsters inhabit the seas and elephants, rhinoceroses, camels and ostriches roam the continent. The side panels each feature vignettes depicting the peoples of different regions in what was thought to be their local costume, including the inhabitants of Senegal, Guinea, Gabon, the Congo, Madagascar, the Cape of Good Hope, Morocco, Malta, Tripoli, Algiers Ethiopia, Egypt, Abyssinia, and Mozambique, as well as a scene of pilgrims traveling to Mecca for the Hajj. Gerritsz derived his artistic inspiration from various sources including Theodore De Bry and the Italian mannerist draughtsman Enea Vico.