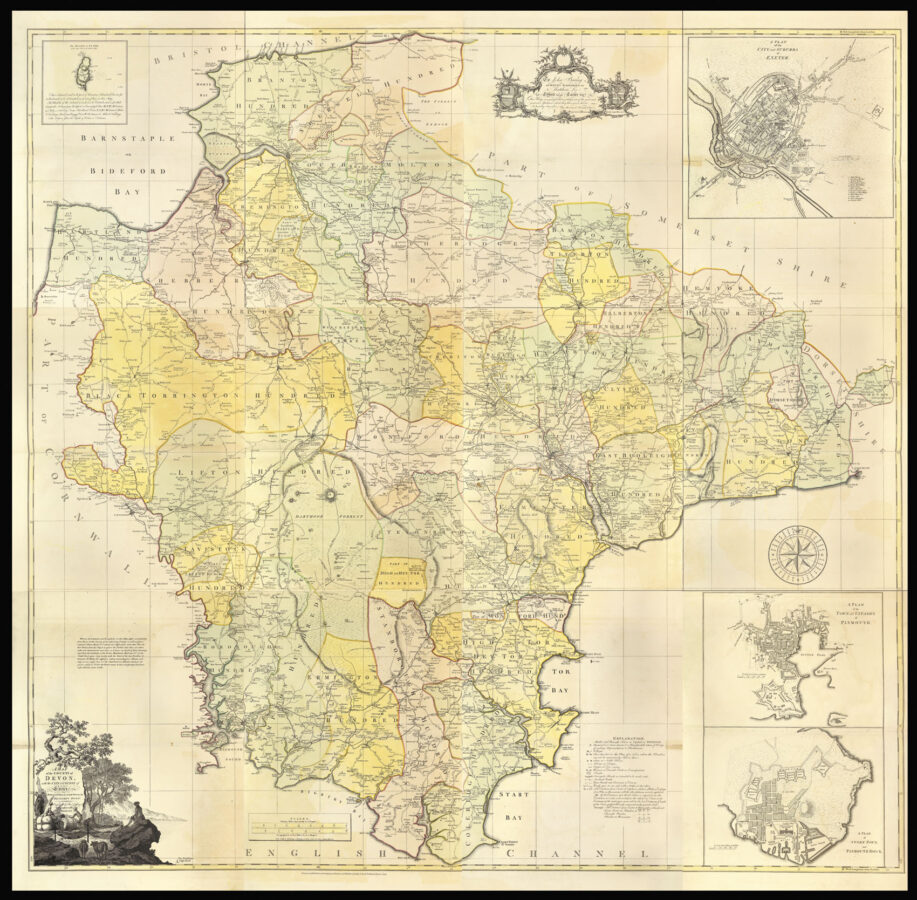 A Map of the County of Devon with the City & County of Exeter. Delineated from an actual Survey on Twelve Sheets of Imperial Paper, the Scale an Inch to a Mile. By Benjamin Donn, Teacher of the Mathematics, &c. late of Bideford, now of the City of Bristol. Engraved by Thomas Jefferys, Geographer to His Majesty. To which is Prefixed A General View of the County, on One Sheet, with the Indexes of the Parishes, Seats, &c. for the readier finding them o the Large Map.

The first county to be mapped on a scale of 1 inch to the mile.

The best know of all large-scale county surveys due to the 100 guineas award from the Royal Society of Arts; the first map to receive the award that was conceived by the society in 1762, i.e. the first county to be mapped upon a scale of 1 inch to the mile. Donn’s map was the model of its kind, the result of a five year survey during which he claimed to have actually measured over 6000 miles of roads rivers together with the angles of towers and hills. Detail includes towns, churches, villages, seats and noted houses, parks, farms and cottages, copper and tin mines, Roman and Danish forts and escarpments, turnpikes, fenced and unfenced roads and the distance between towns.

Benjamin Donn was a teacher of mathematics and in his preface to the map he acknowledges the use of trigonometry and astronomy in his survey. His large-scale map of Devon was sold for one and half guineas uncoloured with an extra 5 shillings for it to be coloured. It was also bound as an atlas — the present example — with a title page and list of subscribers for 2 guineas.