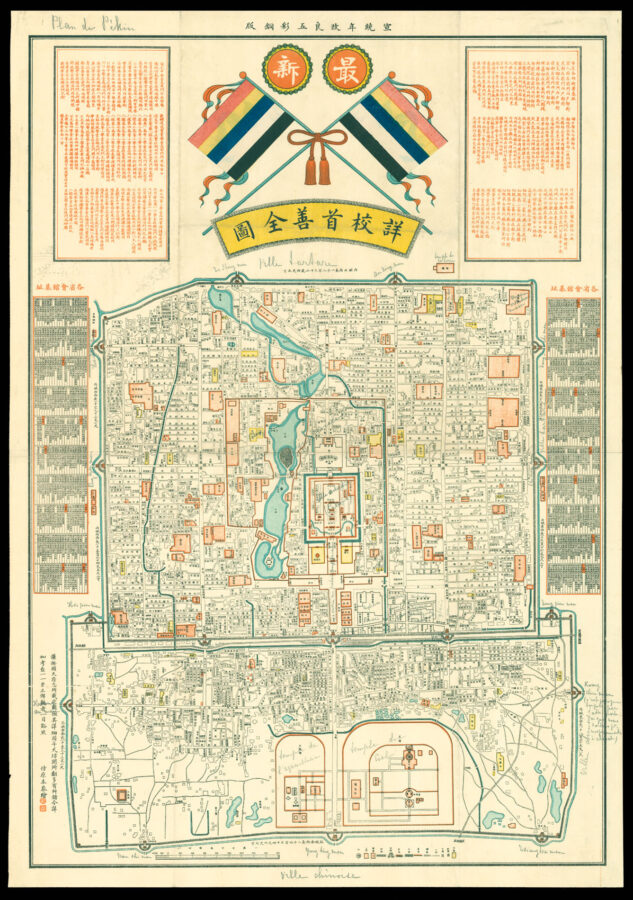 A Chinese map of Beijing, with additions in pencil presumably by a French former owner, and possibly a diplomat, given that each of the European embassies near the entrance to the Forbidden City are labelled. The inscriptions identify the Forbidden City (“Ville Interdit”) with two thick lines showing the surrounding wall and moat. The Golden Water River winds across the lower half. The Forbidden City was the Chinese imperial palace and seat of the government for nearly five hundred years. The inscriptions also identify the growth of the city under various ruling dynasties. The narrower upper portion of the city is labelled ​“ville tartare”, marking the capital built there by the Mongol warlord Kublai Khan, after his grandfather Genghis had razed the previous settlement in 1213. The wider lower portion is labelled ​“ville chinoise”, and is the product of extensions made by the Lioa and Jin dynasties in the tenth and eleventh centuries, building on the original sixth century Tang dynasty settlement. The Temples of Heaven and Agriculture are outlined in orange in this lower portion.

The handwritten title at the upper left corner reads ​“Plan de Pekin”, suggesting that the map was made before 1928, when the capital formally reverted to its former name of Beiping. It would become Beijing in 1949 under Chairman Mao.