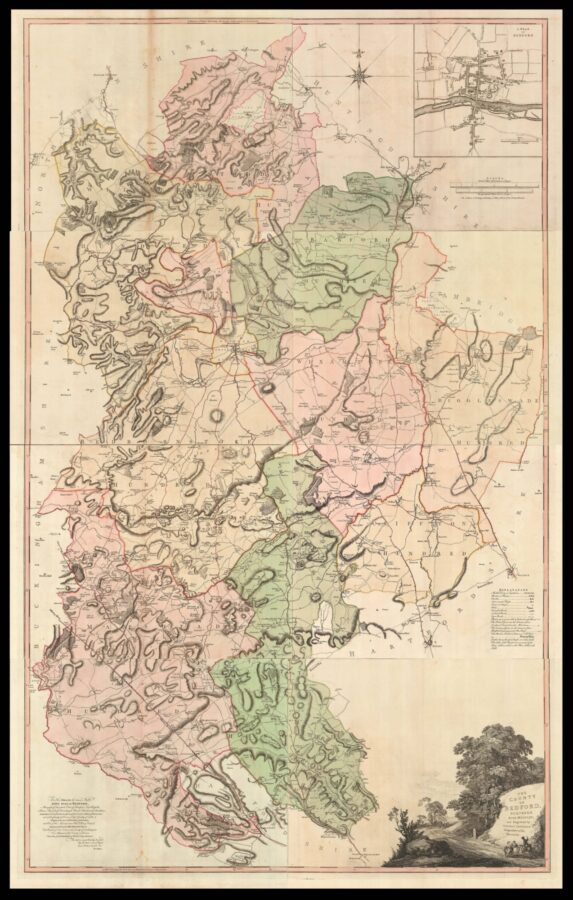 Jefferys’ finely engraved large-scale map of the county of Bedfordshire, in original full-wash colour; together with the rare key sheet.

Thomas Jefferys was involved in one capacity or another in no less than ten English large-scale surveys in the latter part of the eighteenth century. The present map of Bedfordshire was his second foray, having engraved Benjamin Donn’s award winning map of Devon in the same year. A great amount of detail is marked on the map, including market towns, parishes, churches, seats or noted houses, farms, cottages, parks, turnpike roads, enclosed roads, open roads, roads opened on one side, distances from London marked in print numerals, distances from Bedford marked in common numerals, and names of Roman roads marked in gothic script. To the lower right is a fine title cartouche depicting a rural scene; to the upper right is an inset plan of Bedford and scale bar. The map also bears a dedication to the Duke of Bedford at the lower left.

Thomas Jefferys was one of the most important and prolific map publishers of the eighteenth century. He was appointed Cartographer to Frederick, Prince of Wales in 1748, and later provided the same office to Frederick’s son George III. Apart from his publishing business he produced important atlases and maps of America and the West Indies, and surveyed and engraved many large-scale maps of English counties. The huge cost involved in these projects was a major contribution to his slide into insolvency and he became bankrupt in 1766. Surprisingly, it made little difference to his business activities, ​“having found some friends who have been compassionate enough to re-instate me in my shop”. One of these friends was Robert Sayer, who joined him in partnership and whose imprint appeared on the later editions of some of Jefferys’ large-scale surveys.

John Ainslie (1745–1828) began his career as an apprentice to Thomas Jefferys in 1762. It is with Jefferys, it is assumed, that Ainslie first learned the talents that made him the greatest British land-surveyor of his generation. Jefferys would have taught him the mechanics of the map and print-trade: engraving, but more significantly, surveying and mapmaking.

As the Seven Years’ War and its American phase, the French and Indian War, drew to a close, Jefferys turned his attention away from military mapping to large-scale surveys of the English counties. These country maps were produced with Ainslie and fellow apprentice Thomas Donald, and Joseph Hodkinson (fl.1765–1812) taking a leading role. They produced maps of Bedfordshire (the present map around 1765; six sheets), Buckinghamshire (1770; four sheets), Cumberland (1770; six sheets) and Yorkshire (1772; 20 sheets). 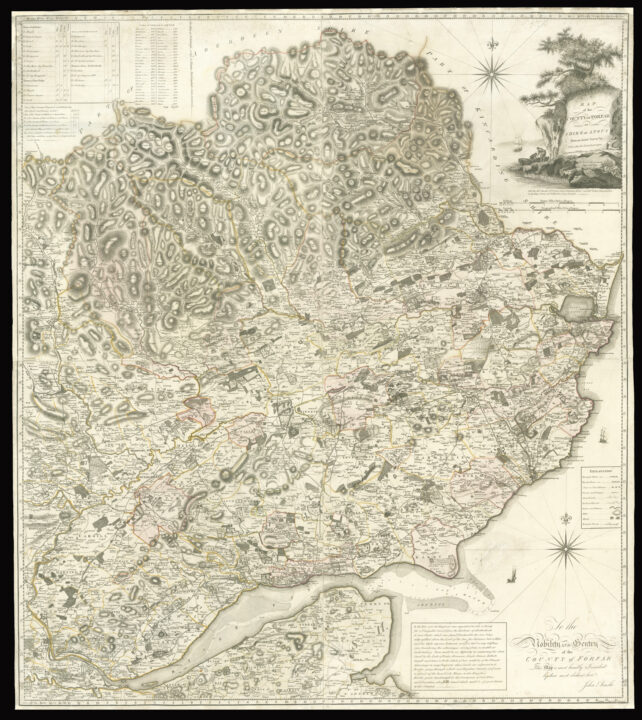