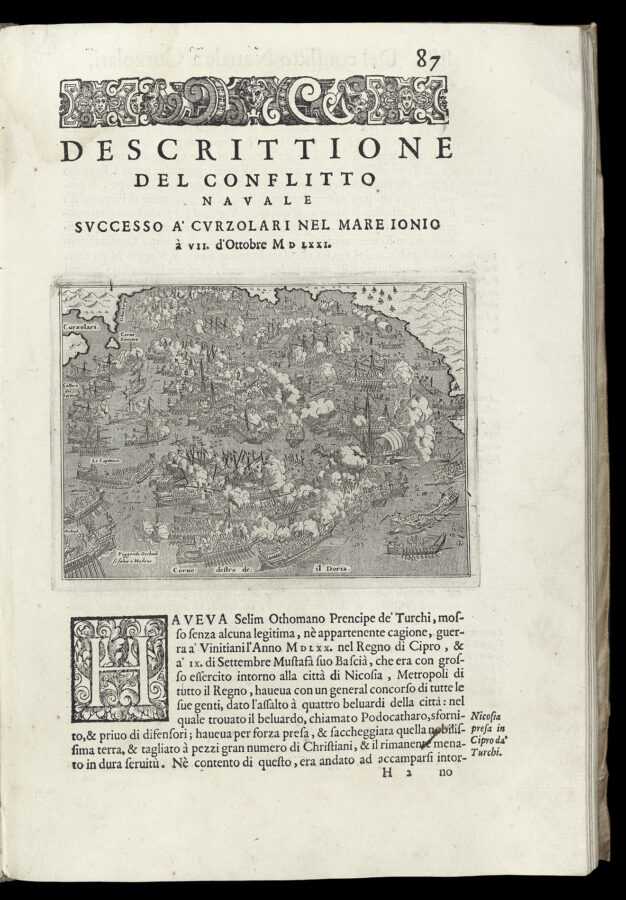 A vivid illustration of the Battle of Lepanto on 7 October 1571, which took place in the Gulf of Corinth in northern Greece between the Holy League and the Ottoman Empire. The Holy League, a coalition of western European Catholic states, mostly from Italy and Spain, was formed in response to Ottoman aggression in Cyprus and in particular the sacking of the Christian colony of Famagusta.The Holy League won a decisive victory; despite this, Venice still surrendered Cyprus to the Ottomans two years later. Lepanto is notable for being the last major battle fought between oar-powered galleys, and according to some commentators, for preventing the spread of the Ottoman Empire into western Europe.

An illustration from ​‘L’isole piu famose’ by Tommaso Porcacchi, a beautiful and important isolario first published in 1572. The isolario, or island book, was a genre developed in the Mediterranean over the sixteenth century as a unique blend of literature, geography and art. It combined up-to-date cartography with contemporary accounts of and information about the places it portrayed. Porcacchi’s work represents the culmination of a movement in the genre towards cartographical accuracy; ​‘L’isole’ was aimed specifically at readers who ​‘dello studio della geografia si dilettano’ (delight in geographical studies). ​‘L’isole’ was the first isolario with maps engraved on copper.