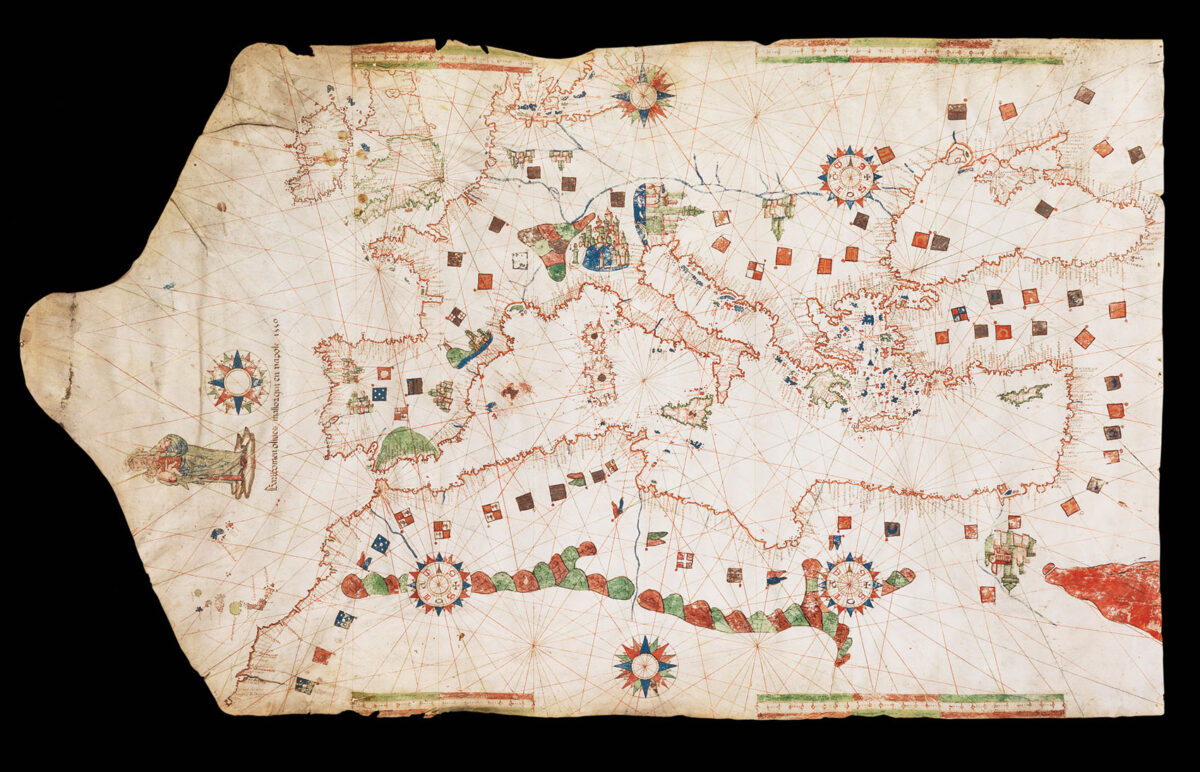 Fine and large portolan chart of Europe.
The portolan chart originated in thirteenth century Italy, as an aid to the pilots navigating their way across the often treacherous Mediterranean Sea. They are characterized by rhumb lines, lines that radiate from the centre in the direction of, often elaborate, wind or compass points that were used by pilots to lay courses from harbour to harbour. Generally drawn on vellum and often embellished in silver and gold, they were, at their height during the fifteenth, sixteenth, and seventeenth centuries, some of the most beautiful examples of the mapmaker’s art ever produced.

This particular portolan chart is the work of Bartolomeo Olives (fl.1538–1585), a senior member of a Mallorquin family of prominent early chart makers. He began his working life in Mallorca, moving to Italy around the middle of the sixteenth century, and finally settling in Messina. Richard Pflederer records 15 examples of Bartolomeo’s work in his census of portolan charts and atlases, ranging in date from 1538–1585.

The present chart is signed and dated 1550, and is the third earliest dated work by Bartolomeo: examples in the Museu Maritim, Barcelona, and Biblioteca Generale, Venice are both dated 1538. Another chart housed in the Hispanic Society of America in New York bears the date 1550, and the place of publication as Palermo, Sicily. Bartolomeo is believed to have moved to Italy from Mallorca in around 1550. This is borne out by the present chart, which gives the place of publication as Mallorca and Naples – the only chart by Bartolomeo to bear such an inscription.

A great deal of his work is typical of the so-called ​‘Catalan School’, with the use of flags to denote dominions, vignettes of important ports, the use of elaborate wind or compass roses, and the Red Sea coloured red. Of the 15 institutional examples recorded by Pflederer, we have managed to consult six (Museu Maritim, Barcelona; Museo Correr, Venice; Bodleian Library, Oxford; Osher Library, Portland; Huntington Library, San Marino), and an example that appeared at Sotheby’s in 2000, from which we can draw some tentative conclusion about Bartolomeo’s style.

Bartolomeo’s style would appear to be remarkably consistent throughout his career: a religious figure, usually the Madonna and Child, is depicted at the neck of the chart (the Barcelona example depicts God); in the Atlantic he places his name, place of production, and date, in gold; to the four corners are scale bars; he uses letters for the cardinal points on several of the wind or compass roses (northeast is denoted by the letter ​‘G’ for the Griego wind, east with a Maltese Cross, southeast by ​‘S’ for the Syrroccho wind, south by ​‘O’ for Ostro, southwest by ​‘A’ for Africus, west by ​‘P’ for Ponente, and northwest by ​‘M’ for Maestro); the stylized depictions of ports and towns, most notably that of Venice and Genoa. In terms of colour Bartolomeo tends to limit his palette to green, red, blue, and sepia, with highlights in gold and silver.

What is somewhat unusual about the present chart is the depiction of mountains and cities within the interior, with the Alps, the Atlas Mountains, and the Rock of Gibraltar all shown. Of the ten ports and cities on the present map, seven are common to several of the consulted charts: Porto, Lisbon, Valencia, Barcelona, Genoa, Venice, and Alexandria; the other three, although not named, can be tentatively assigned to Amsterdam (the name ​‘olanda’ [Holland]), (?) Antwerp, and Vienna. Of the charts consulted, only Bartolomeo’s atlas housed in the Huntington Library depicts cities within the interior.

We are only aware of one other portolan chart by Bartolomeo being offered for sale in the last 35 years: Sotheby’s, London, 12 June 2000, lot 107.