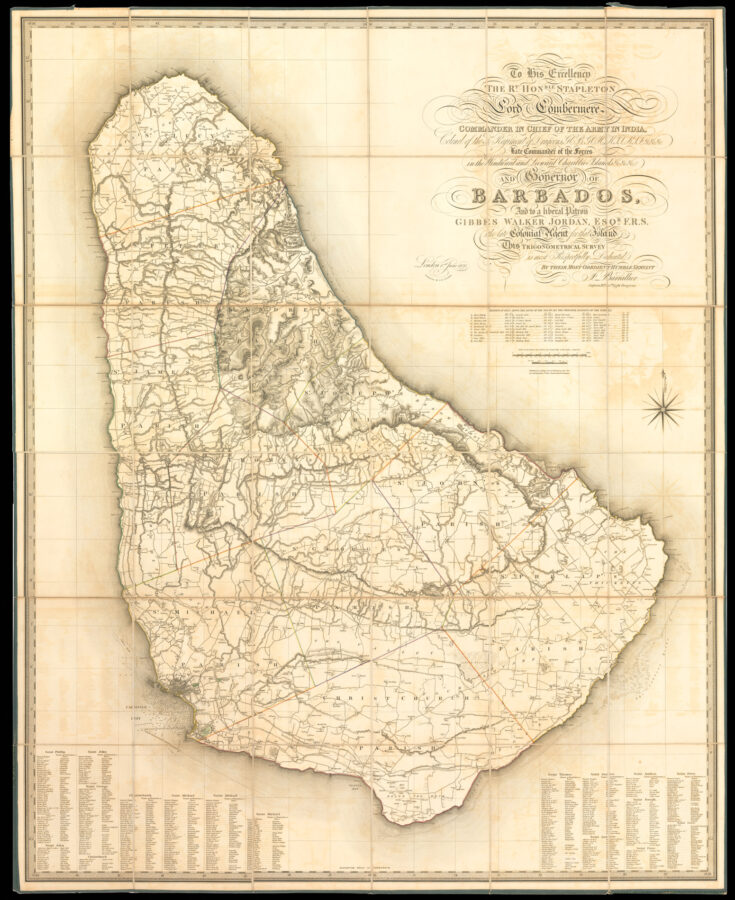 Map of Barbados To His Excellency the Rt. Honble. Stapleton Lord Combermere…

Francis Louis Barrallier (1773–1853), engineer and explorer, was the son of a French naval surveyor, who after the capture of Toulon in 1793 was employed by the British. He made his name as a surveyor in New South Wales. Under the patronage of Charles Greville, Duke of Portland he gained passage to Australia in 1799. He would spend some four years out in Australia, returning to Britain in 1804.

In 1805, he was appointed lieutenant in the 90th Regiment, and served at St Vincent in 1806, where he improved the defences. In 1809 he became a captain in the 101st Regiment, and as assistant engineer was present at the capture of Martinique. He was appointed aide-de-camp to the commander-in-chief in 1809, participated in the invasion of Guadeloupe in 1810, and in 1812 was ordered to make a military map of Barbados, which took him five years to complete — upon which the presne map is based. In 1813 he was appointed deputy assistant quartermaster general under Sir James Leith, next year was present at the second attack on Guadeloupe, which led to its capture, and then was appointed surveyor-general of Guadeloupe. In 1817 he returned to London and, after various periods of service in the 33rd Regiment and 25th Light Dragoons on and off half-pay, he became a brevet major in 1830 and a brevet lieutenant-colonel in 1846. He died on 11 June 1853 at his home in London, at the age of 80.