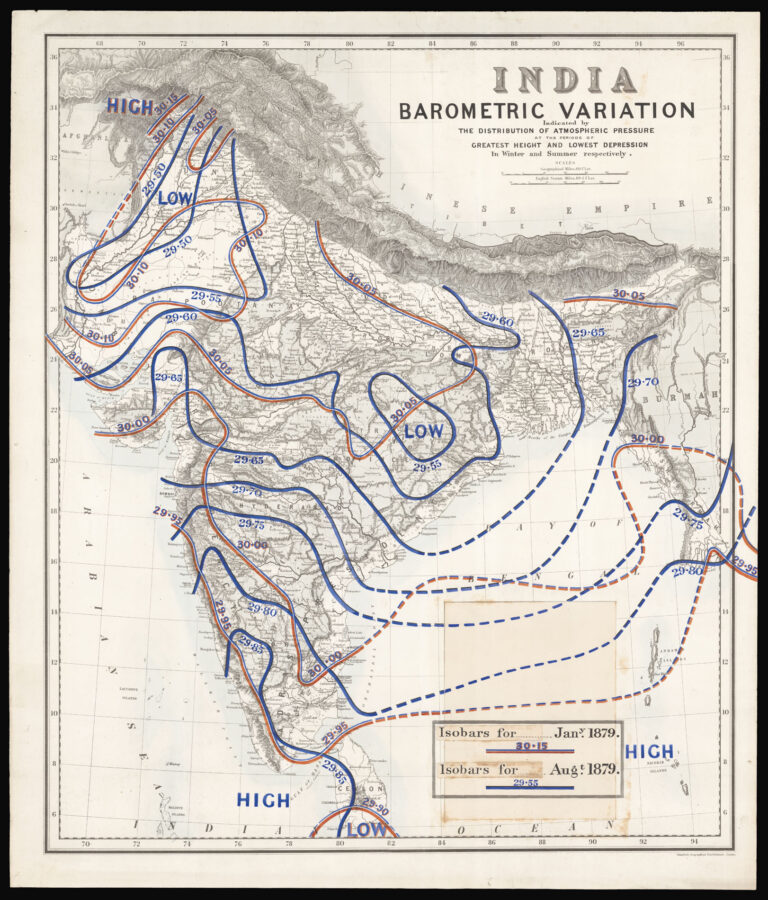 By THE IMPERIAL METEOROLOGICAL DEPARTMENT OF INDIA, 1879

India Barometric Variation Indicated by the Distribution of Atmospheric Pressure at the Period of Greatest Height and Lowest Depression, In Winter and Summer Respectively.

Unrecorded map of India showing barometric pressure, by the use of isobars.

The map was most certainly produced by the Imperial Meteorological Department of India. It would appear from the map that the department was supplied with base maps by Edward Stanford. A large gap was purposefully left between the lithographic title and the scale bar in order to enter a subtitle in manuscript.

The meteorological department was founded in 1875, in reaction to several natural disasters, most notably a disastrous tropical cyclone that struck Calcutta in 1864, killing 70,000 people, and the subsequent failures of the monsoon rains in 1866 and 1871. It was hoped that by bring all meteorological work in the country under one central authority, that further severe weather episodes could be predicted and prepared for. Weather forecasting was at the time, in its infancy. The British Meteorological Office had been set up in 1854 under the direction of Robert Fitzroy, with the first gale warning service begun in October 1859, and the first weather map being published in October 1861.

The first Meteorological Reporter of India was Henry Francis Blanford (1834–1893). Blanford used the resources of the new department to make long-term weather forecasts; most notably by discovering the link between the condition of the snow in the Himalayas and its affect on rainfall in the rest of India. Using this insight, he was able to predict a deficient monsoon in 1885.

The present map shows the variation in atmospheric pressure, at its greatest height and lowest depression, during the summer and winter months. During the summer months highs can be seen over much of northern and central India with the south experiencing relatively low pressure; this pattern is reversed in depths of winter. These types of maps must have aided Blanford in his understanding of the broad weather patterns across the subcontinent and greatly assisted in his longer forecasts.

We are unable to trace any institutional examples of weather maps of India published in the nineteenth century. The University of Manchester, hold two maps by George Philp & Sons, dated 1900, with a title: ​‘India Empire: Climate’, and showing summer and winter weather respectively.