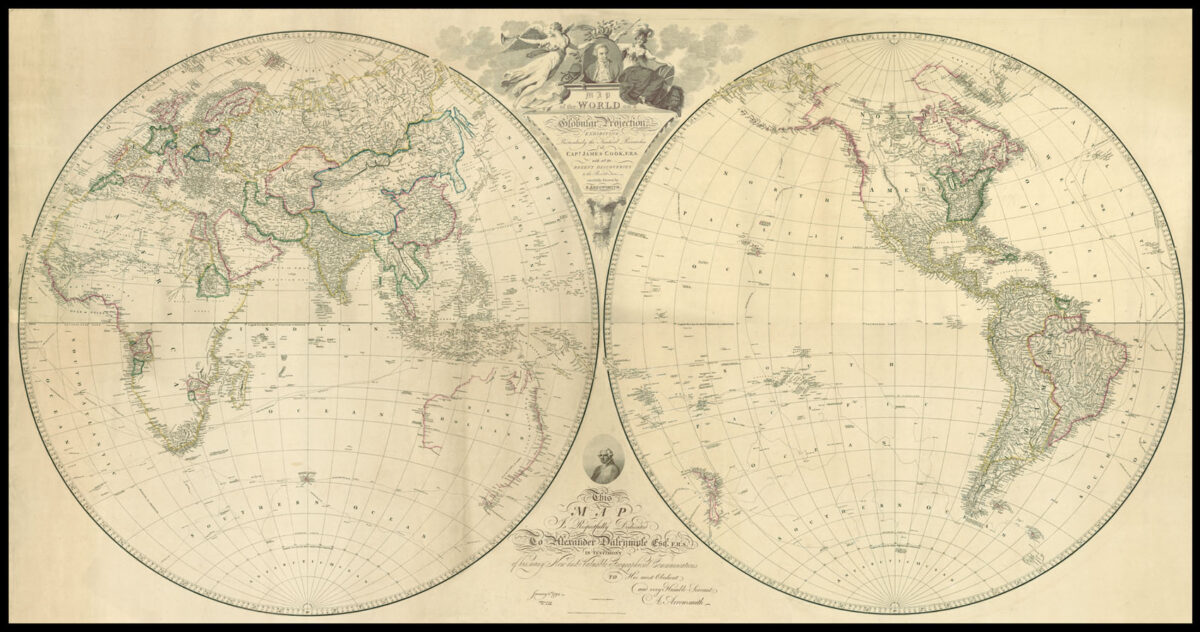 Map of the World on a Globular Projection Exhibiting particularly the nautical researches of Captain James Cook, F.R.S. with all the recent discoveries to the present time, carefully drawn by A. Arrowsmith, Hydrographer to H.R.H. the Prince of Wales.

The map, first published in 1794, is on the same scale — five equatorial degrees to one inch — as Arrowsmith’s 1790 ​‘Chart of the World on Mercator’s Projection’. It was, he states, to be a companion piece to the former map ​‘in order to exhibit the contrast between the two best projections upon which general maps of the world can be constructed.‘

The map is typical of Arrowsmith’s work. All accumulated myth, misconception, and guesswork are stripped away, making for a sparse and elegant style with decorative flourishes left for the borders. All three of Cook’s voyages are plotted, each being highlighted in colour: 1768–1771 green; 1772–1775 red; and the 1776–1779 voyage starts in blue, but after Cook’s death on Hawaii is subsequently marked in black.

The elaborate title cartouche contains a portrait of Cook flanked by a winged Victory and Britannia, and surrounded by navigational instruments. Arrowsmith dedicates the map to Alexander Dalrymple, one of the foremost hydrographers of his day, who had recently been appointed director of the newly-founded British Hydrographical Office.