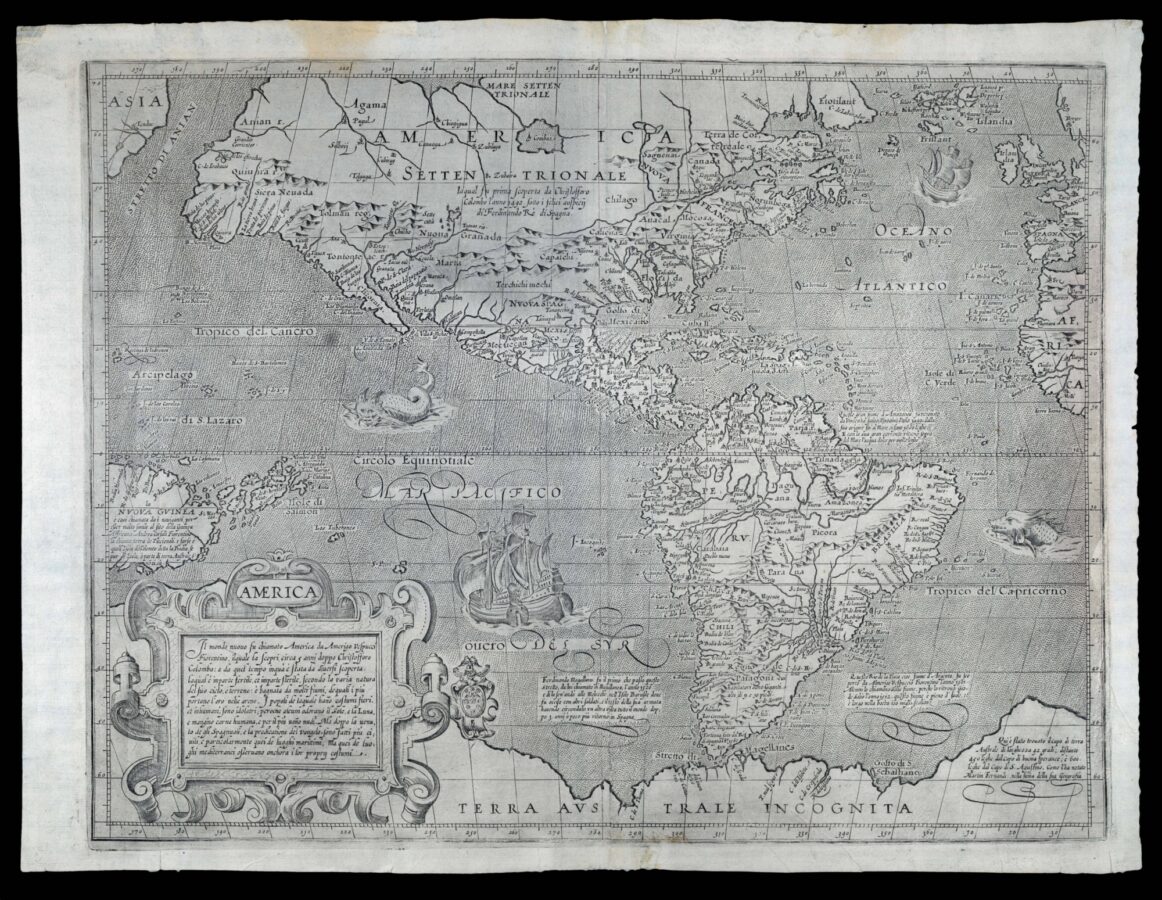 Arnoldi’s separately-published map of the Americas, with the thumb print of the printer!

Only edition of this rare, separately-published map of North and South America.

Arnoldo di Arnoldi (d1602) was a Flemish born cartographer who lived and worked for most of his life in Italy in the workshop of the famous geographer Giovanni Antonio Magini. Burden reports that in early 1600 he moved to Sienna, where he produced two world maps (a large-scale ten-sheet map and a smaller two-sheet map) as well as a set of the four continents, of which this is one. He died soon after.

Arnoldi and his publisher, Matteo Florimi, are identified on his map of Europe, accompanied by a statement that his maps were taken from Ortelius’ ​‘Theatrum’. This statement is, upon closer examination, at odds with the evidence. Instead, Arnoldi’s work has far more in common with Giovanni Battista Mazza’s c1589 map of America. New Guinea is shown here as an island rather than as an extension of Terra Australis, and the large island off the coast of Virginia is unique to Mazza, among other similarities.

However, Arnoldi strays from Mazza in the northern regions of America where, as in his world maps, he used Petrus Plancius’ wall map of 1592 as his source. This is evident in the placement of rivers in the northwest, as well as his inclusion of the mythic lake and island city of ​“Conibaz” instead of Mazza’s equally imaginary ​“Mare Dulce”. California is shown correctly as a peninsula rather than as an island, as it often was depicted.


The clear impression of a thumbprint is visible in the right-hand margin, possibly that of Florimi himself! Matteo Florimi (1540–1615) was a publisher and printer active in Siena, where he published his first work in 1589, ​‘The Pilgrim’. He produced both printed books and a considerable number of loose engravings, mostly of geographical and religious subjects, including maps. He worked in collaboration with the Flemish engravers Pieter de Jode, Cornelis Galle, who appears to have had as a student his son John, and Maerten de Vos.

Antonio Lafreri (1512–1577), arguably Italy’s most influential and successful commissioner and publisher of maps, settled in Rome in 1540 and established his business in 1554 as an engraver and print seller in the Via del Perione. From 1553 onwards, Lafreri partnered with an established dealer, Antonio Salamanca. In 1562 Salamanca died, and from 1563 until his death in 1577, Lafreri published on his own account, and became the leading dealer in engravings in Rome. Lafreri was primarily a dealer and publisher, rather than an artisan in his own right. He carried in stock the prints made not only by his own establishment, but by others, and his own name appears comparatively seldom in the Lafreri-school atlases attributed to him.

Rare: only two institutional examples of this map are known, one at the Library of Congress, and another in the British Library. Only one example is recorded as selling publicly at auction in recent times, at Sotheby’s, October 24 1986, lot 49.