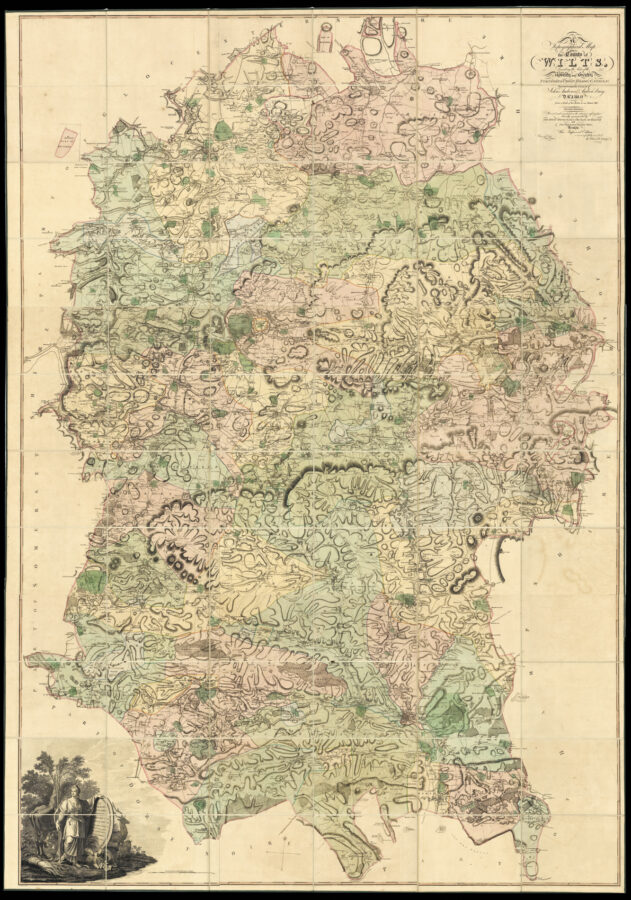 A Topographical Map of the County of Wilts Describing the Seats of the Nobility and Gentry, Turnpike & Crossroads, Canals, &c. Surveyed originally in 1773, by John Andrews & Andrew Dury: Drawn from a scale of two Inches to one Statute Mile. Second Edition. Revised and corrected from the extensive information liberally communicated by The Right Honourable The Earl of Radnor and Sir Richard Hoare Bart., To Whom This Improved Edition is most respectfully inscribed.

Cartouche dedication reads, ​“To Noblemen, Gentlemen, Clergy, Freeholders of the County of Wilts, this map is inscribed by their most obedient and devoted servants, John Andrews, Andrew Dury.“

This later edition is comparatively scarce. Although not always with justification, it was a habit amongst eighteenth and nineteenth century cartographers to claim improvement on their predecessors’ work; Faden put considerable effort into revising the Wiltshire survey adding much topographical detail. The small engraved title and list of subscribers is replaced by a re-engraved title that is larger and more informative, with an acknowledgement of the ​“extensive information liberally communicated by the Earl of Radnor and Sir Richard Hoare’ to whom Faden dedicates the map. For the second edition the numeration of the sheets is reversed — the survey now starting with the north west part of the county.

Dury and Andrews were responsible for three of the major eighteenth century county surveys: Hertfordshire (1766), Kent (1769) and Wiltshire (1773), all on a scale of two inches to one mile and all engraved in the manner of John Rocque with the hills shown in the caterpillar fashion and the fields differentiating between meadow and arable. Most large-scale maps were on a scale of one inch to one mile — the larger scale allowed the use of far greater detail especially in the road system, which includes even the narrowest of lanes, and in the delineation of towns, villages and parishes. Also shown are hills and heaths, woods, parks and commons, rivers and water-mills, marshes and ponds, and kitchen gardens.

John Andrews (1736–1809) and Andrew Dury (fl. 1742 — 1778) were surveyors, specialising in large-scale maps of the areas around London and Windsor. Little is known of Dury’s life, however, his imprint often appears on the work of a number of prominent London publishers from Sayer and Bennet to Laurie and Whittle and Gentlemans’ Magazine. At some point, from 1754 to 1757, he also seems to have had an office in Dublin where he worked with John Rocque. Andrews also produced a number of town plans in conjunction with Matthew Wren, as well as the 1777 ​‘A New Map of the British Colonies in North America” and the 1787 ​“Chart of New Holland”.