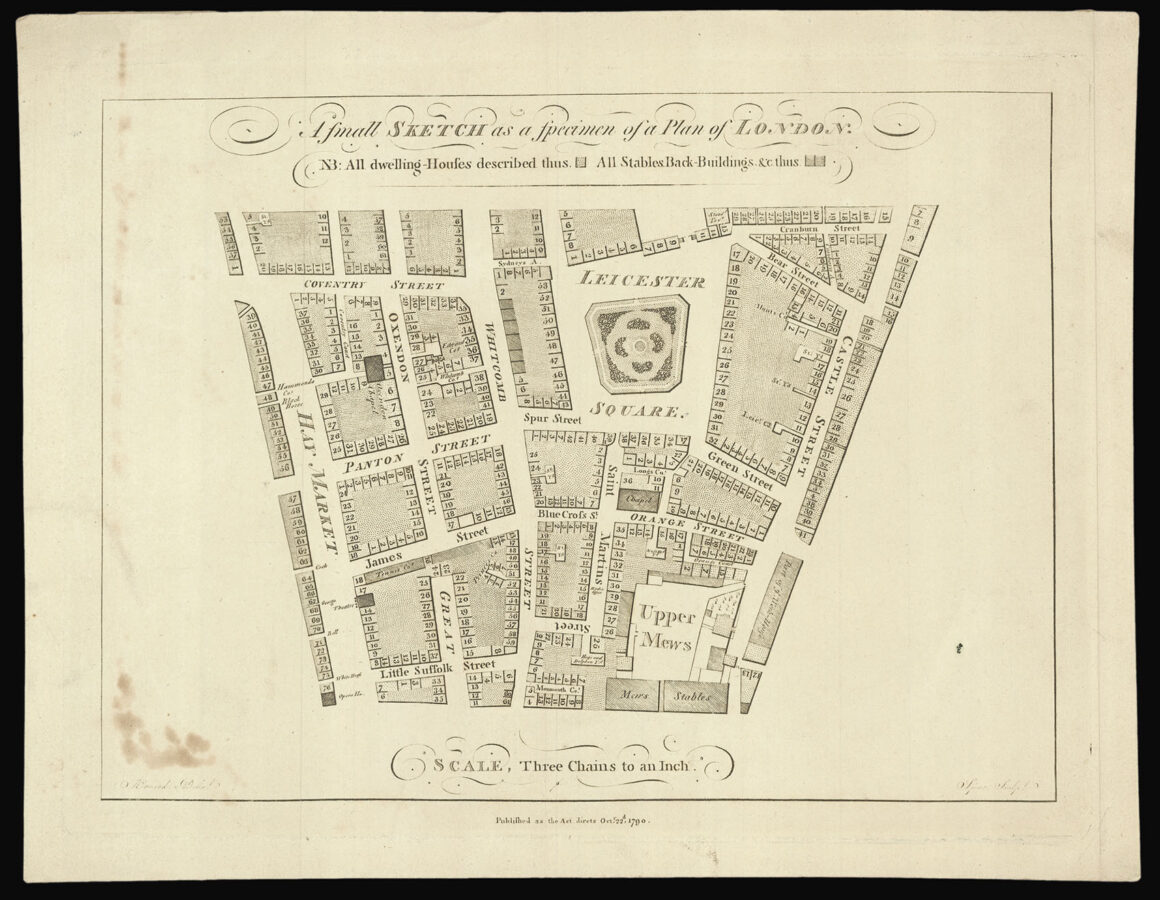 A finall Sketch as a specimen of a Plan of London.

A rare advertisement map of the area around Leicester Square, produced in support of the great map of London made by Richard Horwood and published from 1792 to 1799. The small map provides an insight into the difficulties faced by mapmakers attempting to create new material, rather than reusing the stock of previous cartographers.

Very little is known about Horwood (1758–1803). Most likely he was working for the Phoenix Assurance Company on surveying jobs when he began the enormous task of surveying the whole of the built-up area of London: 32 individual map-sheets measuring over 4 metres wide by 2 metres tall when joined. Horwood aimed to produce a map on the same scale as that of John Rocque earlier in the century, but London’s population had increased by a third in that time and so had its reach. He claimed that he ​“took every angle, measured almost every line and after that plotted and compared the whole work” in person.

Horwood originally planned for the work to take two years. This small sample plan was sent to all the London vestries with a letter promising that those ​“who gave him Encouragement” could have a ​“compleat” copy by ​“the year 1792”. His estimate proved to be over-optimistic and only one sheet was published by 1792. The map was reissued with another prospectus and a list of subscribers in 1795. In January 1798 he wrote to the Phoenix Assurance Company offering to dedicate his map to the company if the directors would make him a loan of £500 to enable him to finish the work. His request was granted but this, in addition to an award from the Society of Arts, were too little and too late and, in 1803, Richard Horwood died in Liverpool in poverty and obscurity, a fate shared by several of his contemporaries in cartography and publishing.

Although the ​‘Sketch’ is very small, it conveys the level of detail to be expected from the full-size map. House numbering began in London in the 1760s, if not before, although they were not used in official records until much later – the nineteenth century in some cases. Horwood was the first to mark them on a map.

It also reveals the changing face of patronage. Earlier mapmakers such as William Morgan looked to royal or aristocratic patrons to shoulder the costs of their original, large-scale surveys, and in the mid eighteenth century John Rocque was sponsored by the Aldermen of the City of London, but Richard Horwood’s principal backer was the Phoenix Fire Company, an insurance firm. He also relied on private subscriptions.

Both the map and prospectus were ephemeral, and very few copies survive. The Guildhall Library holds a copy of both the 1790 and 1795 prospectus and map; the British Library holds copies of the 1790 and 1792 map with a prospectus signed and dated 1794 by Horwood. Another specimen map produced as an advertisement, covering the Cavendish Square area, is held in Cambridge University Library.