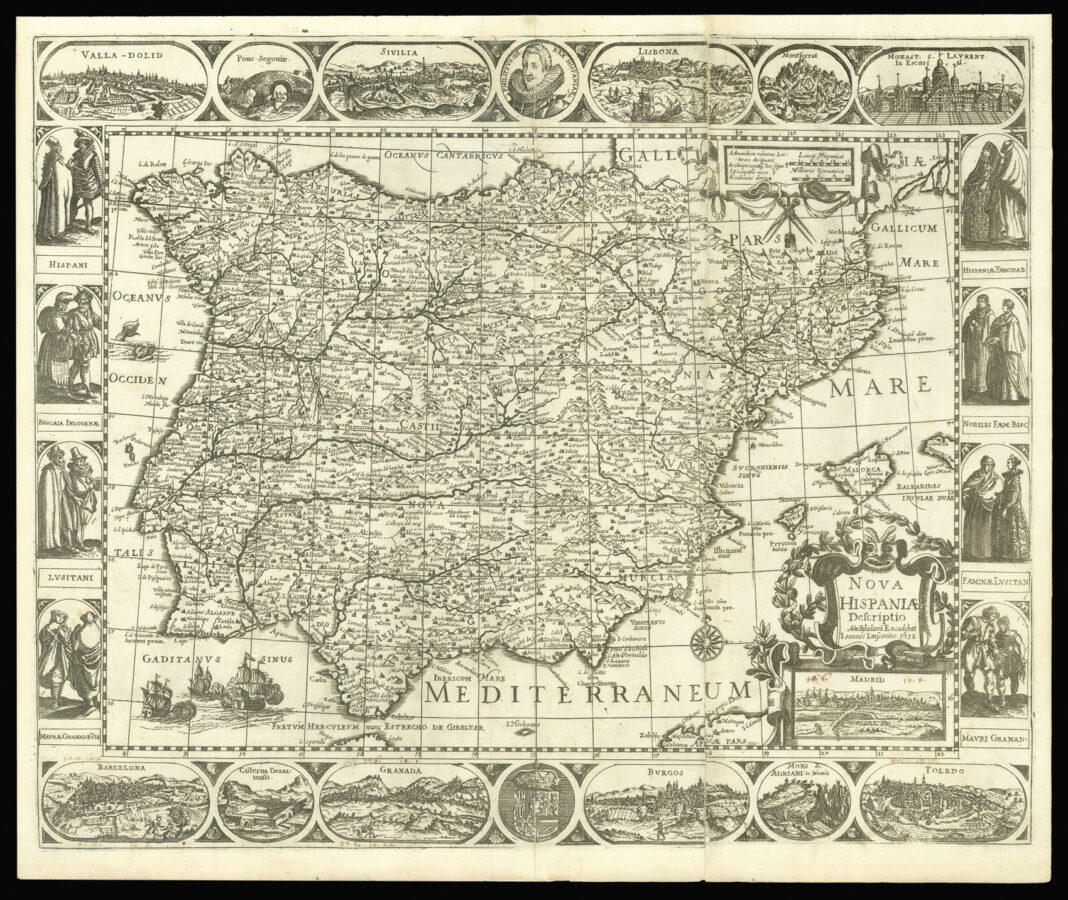 Gunther Schilder, in the introduction to his cartobibliography of Dutch folio-sized maps with decorative borders (sometimes termed cartes a figures, or ​‘panelled maps’) commented ​“this genre must be considered one of the finest products of the Amsterdam map-making industry. The successful combination of advances in geographical knowledge with the expression of artistic capability made these maps a valued commodity on both the domestic and broader international market.

That many of these maps were sold as separate sheets, and were only randomly inserted into composite-style atlases of the period, accounts for their rarity today, while their aesthetic appeal has not diminished over the centuries, making them highly collectable examples of the mapmaker’s art.

Although the present map bears no date, and is clearly a copy of the Dutch original, it is possible that it was engraved in Venice, perhaps by the little known publisher Stefano Scolari. There are several reasons to back up this case. Firstly, the paper used in the printing bears the water mark of an anchor in a circle, surmounted by a six-pointed star (possibly Heawood (8) which indicates the paper to be Italian and of the period; secondly the map appeared together with six other similar examples at a Sotheby’s auction, several of which bore the date 1642, and had numerous vignette views to the borders reversed, so that the Tower of London appeared on the left rather than the right of the image, however, this error is not present on the views of Venice, Rome and Constantinople which appear on the map of Europe.

The map is based upon Pieter van den Keere’s map of Spain initially published in 1616. The title and imprint are combined in a cartouche at the lower right, below which is a view of Madrid. A simple cartouche with two scale bars and a legend with the symbols used upon the map appears in the upper right. The map image is framed by latitudinal and longitudinal scales; meridians and parallels are drawn at each full degree. The map is surrounded by views to the upper and lower border, with a portrait of Philip IV and the coat-of-arms of Spain, and figures to the sides.

The map was subsequently acquired by Janssonius who reissued it with different figures in 1626 and again in 1632 (Schilder, ​‘Monumenta Cartographica’ VI, 101.3) . It is the latter state, which the present map is based upon, however, with the figures and views inverted. The engraver having copied the border from the map, when the map was subsequently printed the figures and views become inverted.