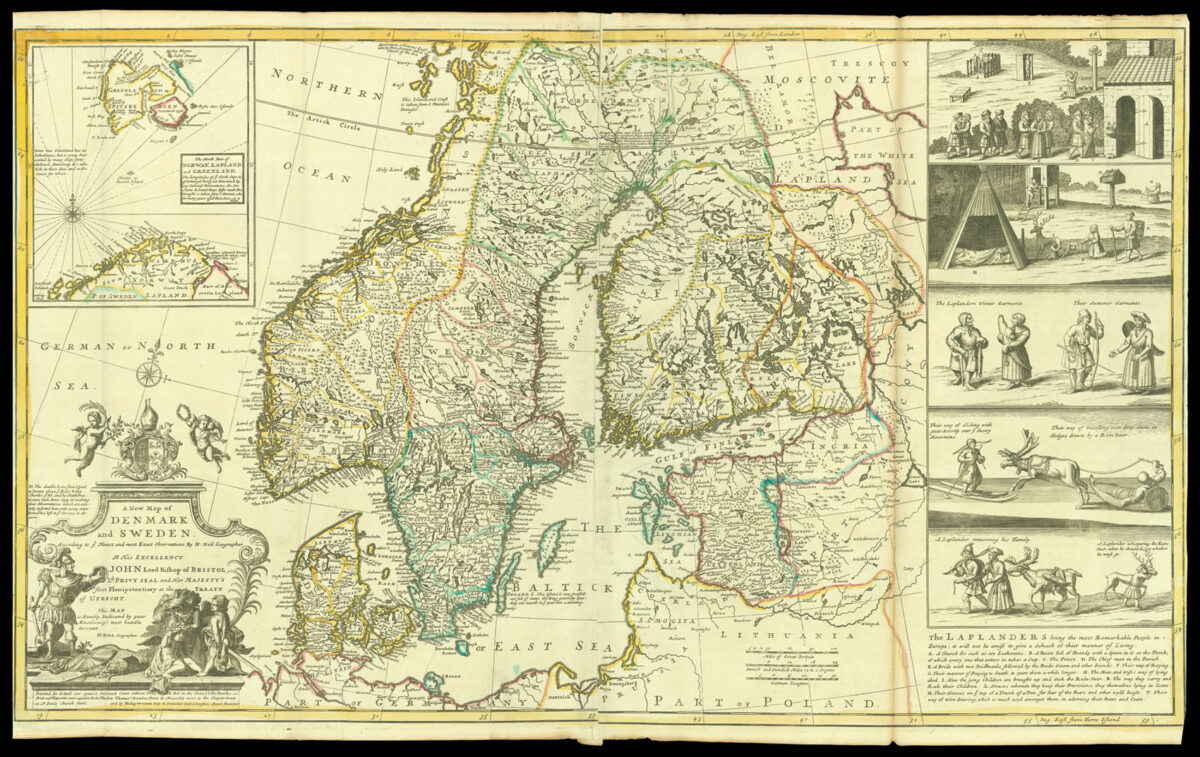 An English view of life in Scandinavia

A New Map of Denmark and Sweden According to the Newest and Most Exact Observations by H.Moll Geographer.

A detailed map of Scandinavia, with sundry annotations giving geographical and navigational information. Moll notes that he has used the measurements of latitude taken by expeditions commissioned and led by Charles XI of Sweden. His successor, Charles XII, was a brilliant general and reformer. His struggles during the Great Northern War and subsequent exile in the Ottoman Empire drew European attention to Scandinavia, possibly motivating the publication of this map. The inset to the upper left shows Norway, Lapland and Greenland. The series of vignettes on the right are of Laplanders and their (to English eyes) unusual habits, including skiing and using reindeer as beasts of burden.

The map is dedicated to John Robinson (1650–1723), a clergyman who became chaplain to the British embassy in Stockholm in 1680. Although not the ambassador himself, he conducted business for the Crown in the ambassador’s place, and was an important figure in Anglo-Swedish diplomacy. He even accompanied Charles XII during the Battle of Narva, where Sweden repelled a Russian army four times its size. Robinson published an account of his time in Sweden in 1695. After returning to England in 1709, he was appointed Bishop of Bristol in 1710, and Lord Privy Seal the year after. As the cartouche notes, he was also first plenipotentiary at the Congress of Utrecht, and signed the treaty on behalf of Britain that ended the War of the Spanish Succession. The map continues to name him as Bishop of Bristol, suggesting it was produced before his appointment as Bishop of London shortly after he returned from Utrecht.