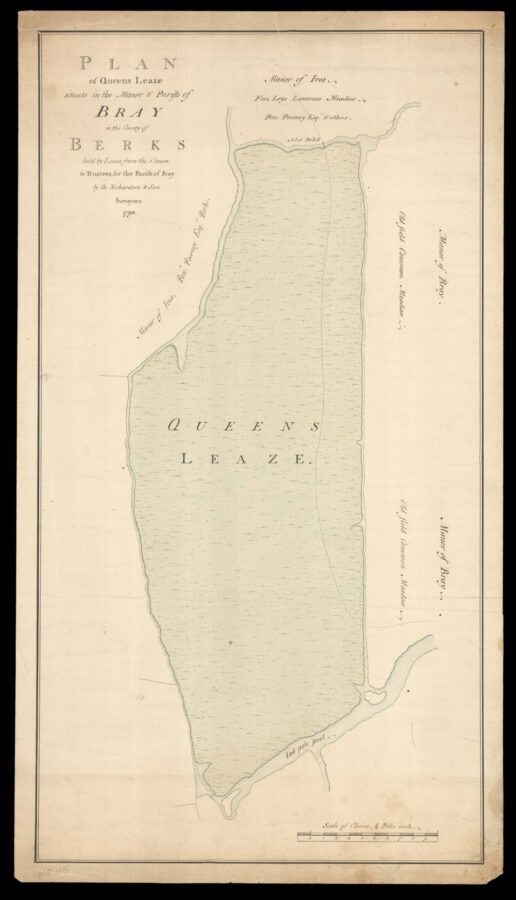 Plan of Queens Leaze situate in the Manor & Parish of Bray in the County of Berks held by lease from the Crown to Trustees, for the parish of Bray by Th. Richardson & Son Surveyors 1790.

This elusive plan of Queens Leaze in Berkshire is an example of one of the many surveys conducted in the eighteenth century in order to record the extent and use of crown lands. King George III had a passion for geography, amassing a personal collection of over 50,000 maps, which are now in the keeping of the British Library. Under his reign, the mapping industry saw great progression in the instruments and principles used by cartographers, giving rise to more accurate geographical representations, as expertly exhibited by the Ordnance Survey which began the year after this plan was produced. There is evidence that the surveyor of Queens Leaze, Thomas Richardson, had previously worked on the king’s cartographical projects, with his plan of Richmond completed ​“under the direction of Peter Burrell Esq. His Majesty’s Surveyor General”.

The Manor of Bray, identified as the land to the right of this plan, was one of the original hundreds of Berkshire recorded in the Domesday book, where the land is said to have been worth 18 hides. It remained property of the crown until 1821, when it was sold at auction for £6,800 and divided into 16 smaller plots. On the left side of the plan, the estate of the wonderfully-named Peniston Portlock Powney MP is shown. The Powney family owned Ives Place (here the ​“Manor of Ives”) during the eighteenth century, but it had previously passed through many hands and played host to a variety of residents, including Anne of Cleaves. Separating the Manor of Bray and the Manor of Ives is Queens Leaze, a long and narrow tract of ground surrounded by a broad, deep ditch, although neither this plan nor any written record suggests how the land was used. Kerry does note that the fees levied on the local parishoners contributed towards the maintenance of the Church in Bray, but there is no evidence of either church or parishoners on the plan. These simple surveys were used to keep track of the crown lands, and the manuscript title to the verso suggests that at some point it may have been compiled into a collection along with other such plans.