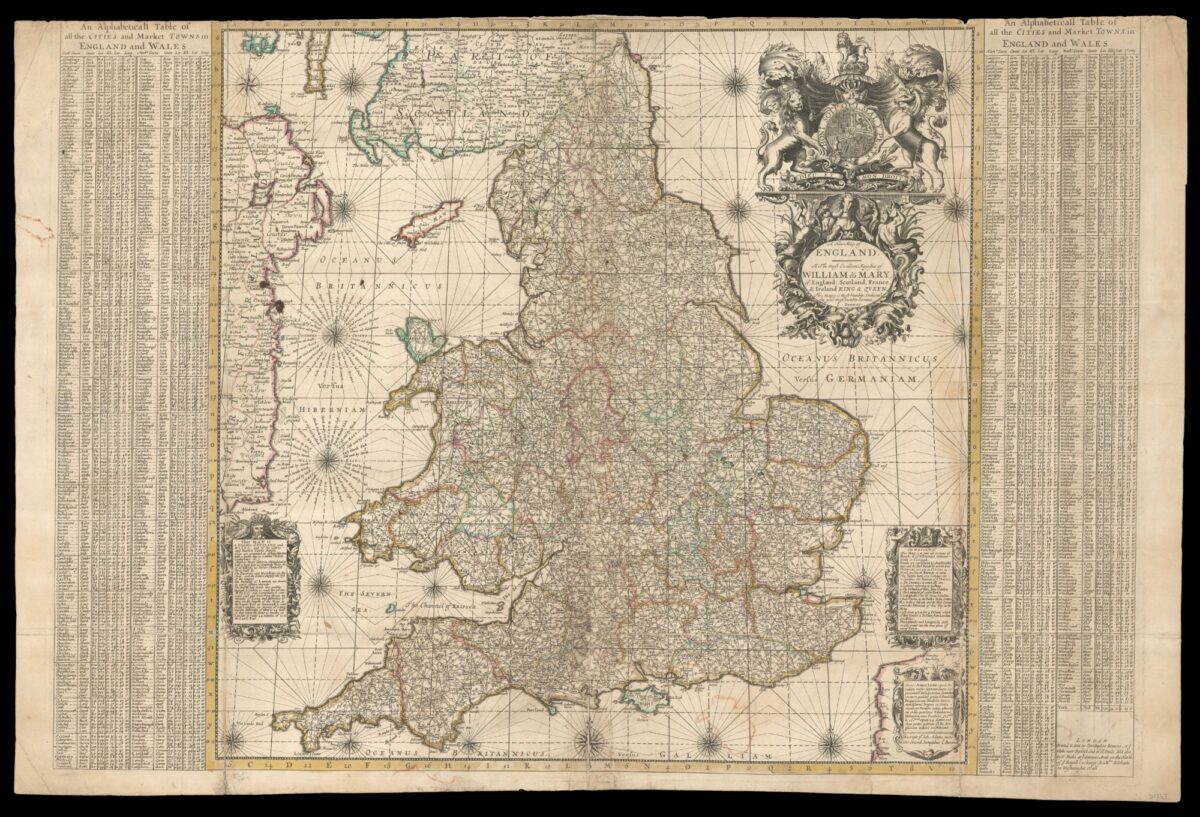 An early economic map of England

A newe map of England. To the most exellent Majesties of William & Mary of England, Scotland, France & Ireland King & Queen, this mapp is most humbly dedicated by your most humble servant, C: Browne

This rare map of England is densely packed with details concerning the distance between trading centres. Produced by Christopher Browne in 1693, it is a copy of the first economic map of England made thirteen years earlier, as recorded by a manuscript note to the verso identifying it as ​‘a reduced version of John Adams’ Map of England, 1680’. It seems to have been designed to appear alongside 69 other maps in Browne’s ​‘New Geographical Atlas’, but was also sold separately. It retains all the key features of
Adams’ map. An elaborate cartouche on the lower right margin contains a note explaining that all the cities and market towns of England and Wales are shown here, connected to their neighbours by parallel lines representing the roads and accompanied by circled numbers showing the distance in miles. This creates a network that spans across all the counties, distinguished by colour outline, and can be used to calculate how long journeys between significant locations would take. This was indeed the intention with which Adams created the original map. Having visited a friend in Wales who owned a fishery on the coast, Adams ​“endeavored to compute what sale he might probably make in the neighbouring markets, by Projecting a Specimen, wherein…I set down all the Markets within an hundred miles and entered the distance between them in figures”. Browne re-engraved copper-plates with Adams’ design, rather than printing from the original, using Adams’ 1890 edition as the basis for his map. This is shown by the fact that the image displays certain geographical features, mainly rivers, which did not appear on the first edition. Browne also appropriates Adams’ index of all the cities and market towns, recorded in tables along both the right and left borders.

These were taken from ​‘A book of the Names of all the Parishes, Market-Towns, Villages, Hamelets, Smallest Places, in England and Wales. Alphabetically set down, as they be in every Shire”, a volume published by Thomas Jenner in 1657. These correspond to the locations shown on the map by number, making this a practical aid to navigating the country, for merchants and all other travellers. Shirley records three states, of which this is the first. Browne’s map is actually more rare than Adams’, with only two institutional examples, held at the University Library in Cambridge and the National Library of Scotland. Furthermore, we have been able to trace only one other example appearing on the market in the past 50 years.