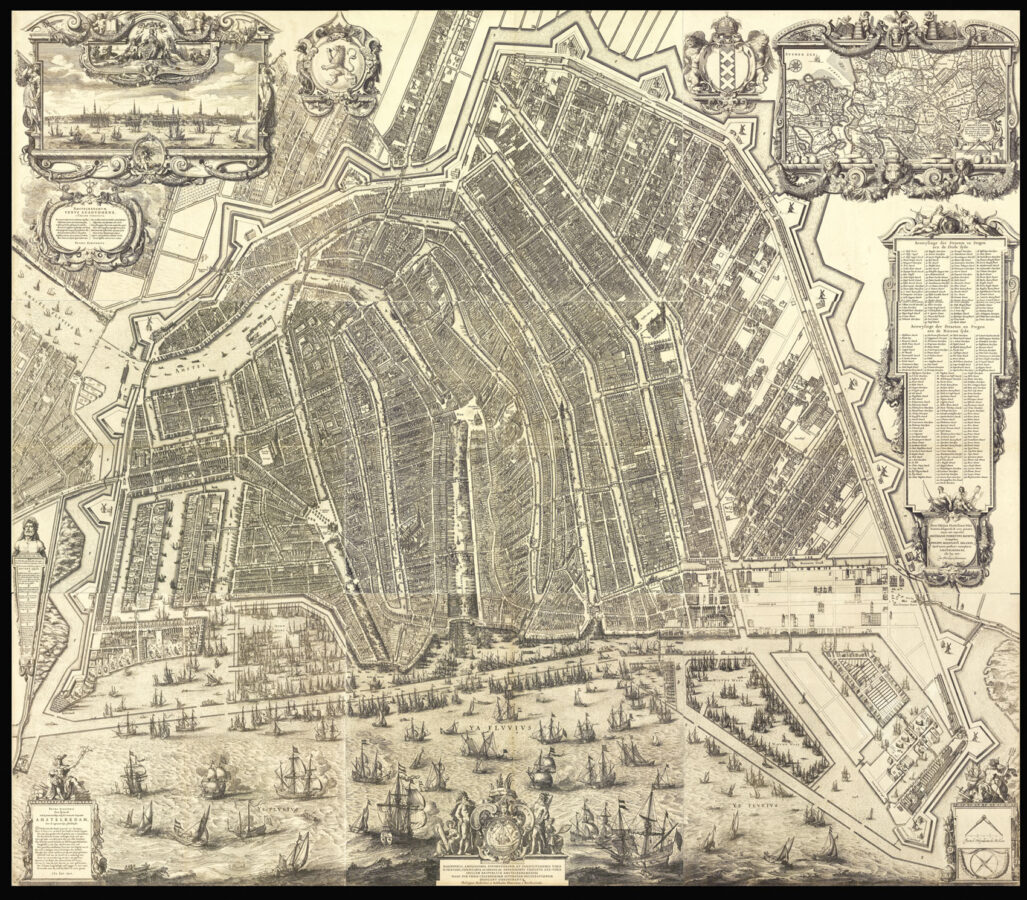 A fine example of Berckenrode’s monumental plan of Amsterdam depicting the city at the height of her powers.

The plan is engraved upon nine sheets, and depicts the city in birds-eye view, with every building meticulously rendered, together with canals, gardens, bridges, ships, windmills, defensive walls, and docks. In the foreground numerous ocean going vessels are depicted, with several shown letting off their cannons. To the upper right of the plan is an inset map of North Holland; below this is a list of the names of streets and alleyways in the Old (no.1–99) and the New town (no.1–158), with the imprint of Berckenrode and Molenvilet, below. To the upper left is a prospect of the city from the sea, with a lauditory poem in Latin by Peter Schrijver (Petrus Scriverius) the prominent Dutch scholar and historian. A key to the canals is contained within the base of a herm, and a further poem, this time in Dutch can be seen to the lower left of the plan. The coats of arms of the city, and that of Holland are shown next to the prospect and inset map, respectively.

What the plan illustrates is the spectacular growth of the city from the one depicted by Cornelis Anthonisz in 1544 (see item ?). The plan shows the cities expansion to the north with the addition of Jordaan and Haarlemmerbuurt districts. Although the new districts were only open to to construction from 1614, the plan shows nearly all the new land had been constructed upon by 1625.

Balthasar Florensz van Berckenrode (1591–1644) was one of the leading engraver and map maker who lived and worked in Amsterdam, between 1619 to 1634. He came to the attention of the burghers of Amsterdam with the publication of his wall map of the province of Holland, in 1620, which would late become world famous by its inclusion in three paintings by Jan Vermeer: Office and Laughing Girl (c. 1657); Young Woman in Blue (1662–1664); and The Love Letter (c. 1670).