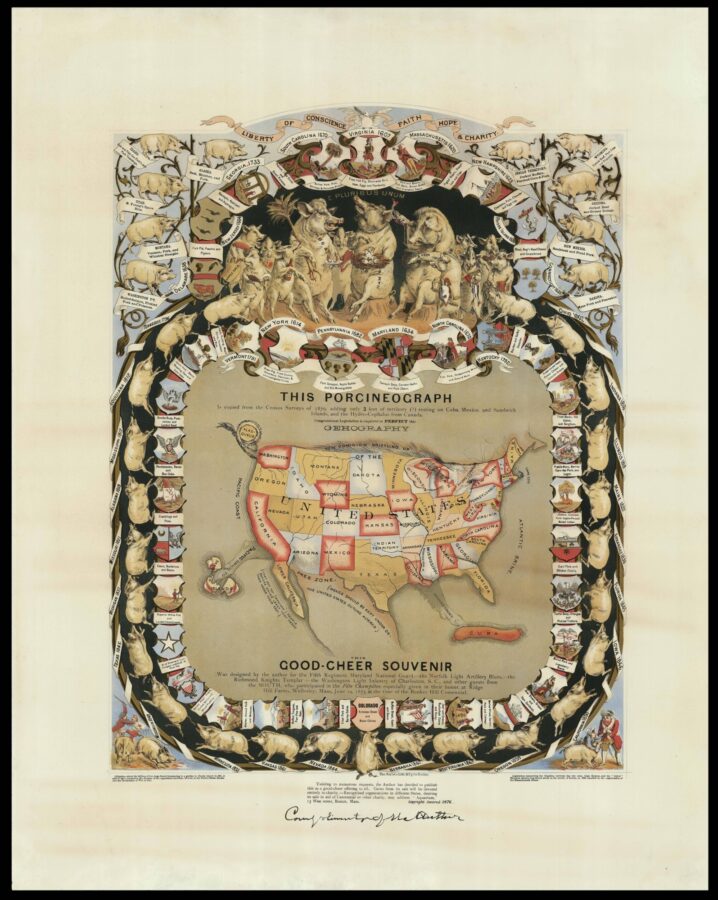 This Porcineograph. This Good Cheer Souvenir.

This map depicts the United States as a pig, with the snout at Maine and two legs represented by the peninsulas of Florida and Baja. A third leg rests on Cuba, drawn in the shape of a sausage, and the fourth on the Sandwich Islands, drawn-naturally-as a cluster of sandwiches. The ​“GEHOGRAPHY,” as the author refers to it, is surrounded by the seals of the states and the names of their favoured pork-based dishes. Two vignettes at lower left and right illustrate events-both involving pigs–that resulting in litigation or legislation that changed the course of American history.

The map was designed by one William Emerson Baker (1828–1888), who intended it to serve simultaneously as a keepsake, promotional piece and symbol of national unity: ​“whose successful Grover & Baker Sewing Machine Company produced accessibly-priced units for home use, retired in 1868 at the age of forty. He moved to a large farm in Needham, Mass., which he transformed into an amusement park full of attractions and exhibits that expressed his radical political viewpoints.

​“In the mid-1870s, Baker’s activist heart turned to the nascent Pure Food Movement, which lobbied for stricter regulations on food producers. (The movement was unsuccessful before Upton Sinclair’s The Jungle was published in 1906.) Baker became obsessed with hygienic farming. In 1875, he held a big party, with 2,500 attendees, to launch his ​“Sanitary Piggery,” a new kind of hog farm featuring ultra-clean housing and controlled diets. Because Baker was a man of many causes, the get-together also celebrated the centennial of the battle at Bunker Hill, and, through the invitation of Southern guests, advocated reconciliation of North and South.
​“This map, which focused on the porcine aspect of the party, was a souvenir for his guests.” (Rebecca Onion, ​“An Eccentric Millionaire’s 1875 Pork Map of the United States,” http://www.slate.com/blogs/the_vault).

The souvenir seems must have been a hit, as Emerson went on to issue a variant edition for sale to benefit charitable causes. This variant, of which the present map is an example, features different typography and can be readily identified by the addition of a note in the lower margin:

​“Yielding to numerous requests, the Author has decided to publish this as a good-cheer offering to all. Gains from its sale will be devoted entirely to charity.-Recognised organizations in different States, desiring its sale in aid of Centennial or other charity, may address ​“Aquarium, 13 West street, Boston, Mass. Copyright secured.

​“Compliments of the Author.“