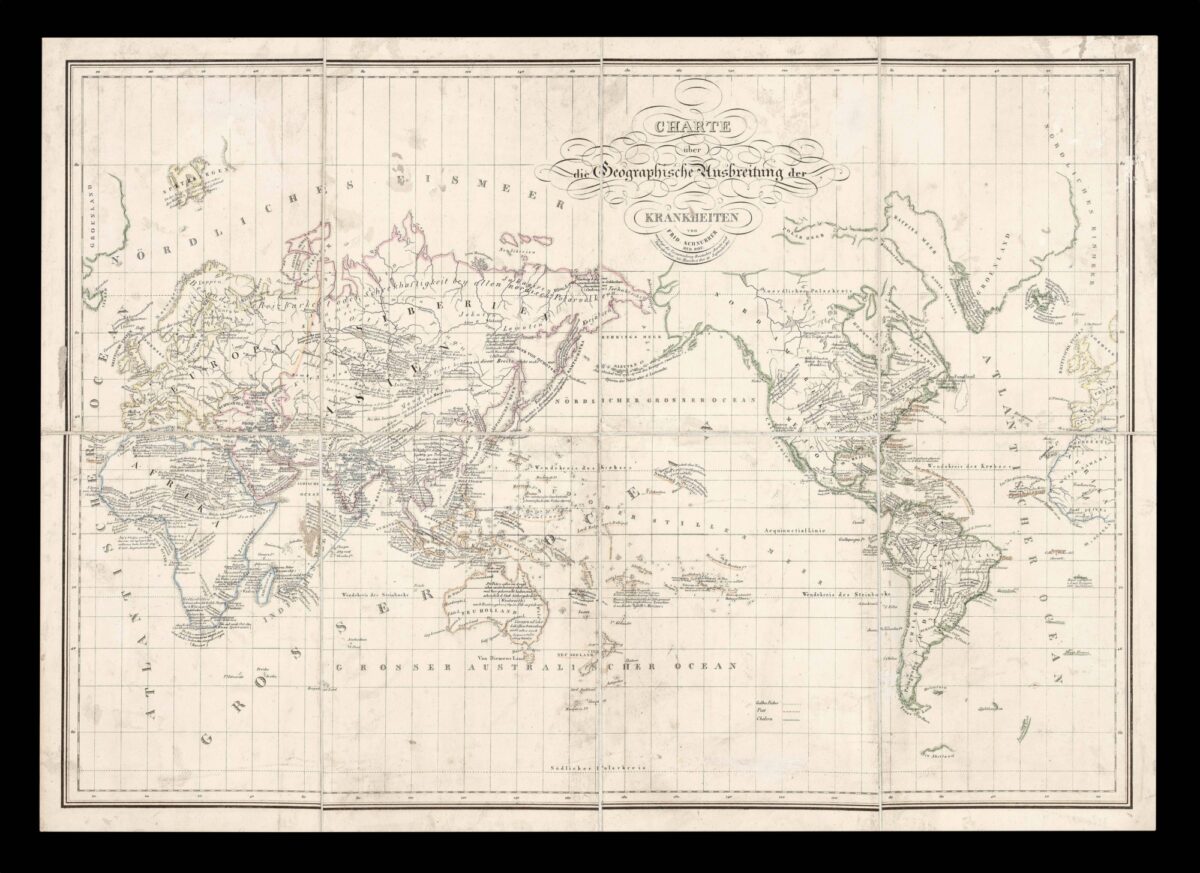 The first attempt to chart the global distribution of all major infectious diseases.

Freidrich Schnurrer (1784–1833) a physician at the University of Tübrigen, published extensively on the subject of infectious diseases, such as, the plague, cholera, and yellow fever.

In 1827, he published the present work, in order to better understand the distribution of infectious diseases. He presented and discussed his work at the sixth annual’ Versammlung der deutschen Aerzte und Naturforscher’ (Meeting of German Scientists and Physicians) in Munich and, the following year, published in the Cotta journal ​‘Das Ausland’.

​“In his paper accompanying the presentation of the map, Schnurrer discussed a variety of methodological problems inherent to his project. He objected to the notion that diseases exist independently of their human hosts and paid considerable attention to the difficulties of graphically representing topographical, historical, and scholarly information. Schnurrer intended to distribute his data over a series of maps of different scales, of which only the first-the global one-was published (though in the report of the Munich meeting, a second map, limited to Europe, was mentioned).” (Brömer, p. 179)

​“At first glance, one is struck, if not confused, by the density of information. Little use was made of colour, as only yellow fever, plague, and cholera had yellow, red, and blue lines respectively under their topographic names. Global routes and historical patterns of the spread of epidemics remained unclear, since occurrences of the diseases from antiquity to Schnurrer’s own times were superimposed. In the case of some diseases, such as the ​“particular irritability and nervousness of all polar peoples”, the distribution stretched around the whole Eurasian arctic coast, but most of Schnurrer’s indications were more localized or even anecdotal, referring to single reports from voyages of exploration. Schnurrer drew few lines to indicate areas of distribution of certain pathological phenomena, with the exception of the ​“Northwestern boundary of intermitting fever”, which ran from Ireland in a slightly convex arch over to Karelia, taken up in Mongolia and continuing to Kamchatka and beyond. The cartographic idiom of Schnurrer’s map resembled that of Zimmermann’s animal geography, which also showed few lines of distribution…. Schnurrer’s reluctance to use lines was odd, since in the lecture accompanying his map, he spoke extensively of areas of distribution.” (Brömer, p. 184)

Even with Brömer’s reservations the map has been called: ​“the most important map in the history of mapping world disease patterns” (Altonen).

The distribution that is reflected on the map, elucidates Schnuerer’s belief that:

​“health and disease were consequences of man and his place on the earth’s surface, and that as man’s place on earth and activities changed over time, so too did the disease types that came to exist on earth, due to the ways in which the environment is modified over time.” (Altonen)

This belief has, with the current pandemic and humanities continued exploitation of the natural world, gained many new adherents over the last year.
The map is extremely rare. We are only able to trace four institutional examples: Universitat Leipzig; Bayerische Staatsbibliothek; Staatsbibliothek Augsburg; and Universitätsbibliothek Erlangen. We are unaware of another example of the map appearing on the market, either as a separate publication, as here, or bound into the March 30, 1828 ​‘Das Ausland’.