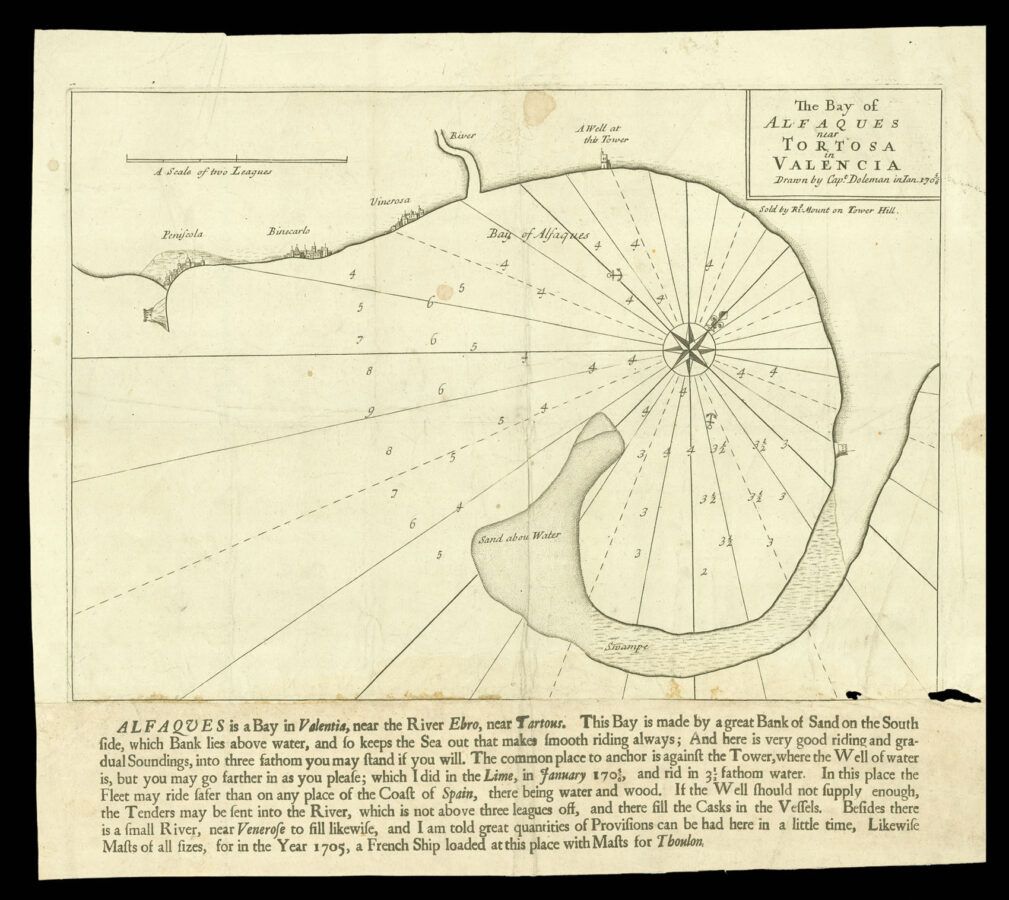 The Bay of Alfaques near Tortosa in Valencia, Drawn by Capt. Doleman in Jan. 1705/6

Captain Doleman was an officer in the English Royal Navy, serving with the Navy off the coast of Valencia during the Spanish campaign of 1705/1706; the Post Boy (issue 1597) for 6th — 9th April 1706 records his capture of a supply ship, detailed in a report by the Surgeon General serving with the Earl of Peterborough’s army, ​“Valencia, Feb. 6,… The Enemy retired about 3 leagues from us, I suppose in expectation to be joyned by 250 men, 6 pieces of Cannon, 150 Barrels of Powder, and Shot proportionable which was coming to them by Sea; but the Lyme Man of War, Capt. Doleman, Commander, had the good Fortune to meet and take them, and carried them into Denia. …”.

This small chart of Alfaques Bay was evidently compiled about this time and given (or sold) to the London chart-publisher, Richard Mount, senior partner of Mount and Page; it may be that members of the armed services supplemented their pay by providing publishable materials to the private publishers in London.

The plate was later used in The English Pilot. Part III. Describing the sea coasts, capes, head-lands, bays, roads, harbours, rivers and ports, together with the soundings, sands, rocks and dangers in the whole Mediterranean …; it seems likely that the chart was added to the 1711 edition, but a copy of that edition has not been examined; it certainly appears in the 1716 edition.

However, the plate for this separate printing shows marked differences; for The English Pilot the printing plate was severely cut-down, so the upper platemark is just above ​‘Alfaques’, removing ​‘The Bay of’. The left-hand margin was been brought in so only the last five letters of ​‘Binecarlo’ remain, necessitating the re-engraving of the scale bar, while the lower platemark touches the edge of the sand bank along the southern side of the harbour.

The descriptive text printed below, penned by Doleman, gives sailing directions for the bay suitable for a wartime context, quite different from the text in The English Pilot which is more merchant marine in emphasis. Alfaques, although a fairly shallow natural anchorage, was considered a good place to shelter from high winds, and convenient as sited almost equidistant between Barcelona and Valencia — about eighty nautical miles from each.

Barcelona had fallen to the English in 1705, after a siege lasting from 14th September to 19th October; it was besieged by a Franco-Spanish force from 3rd to 27th April, 1706, but English command of the sea enabled the city to be resupplied from the sea, while the siege was broken when Sir John Leake arrived with his squadron, carrying reinforcements.