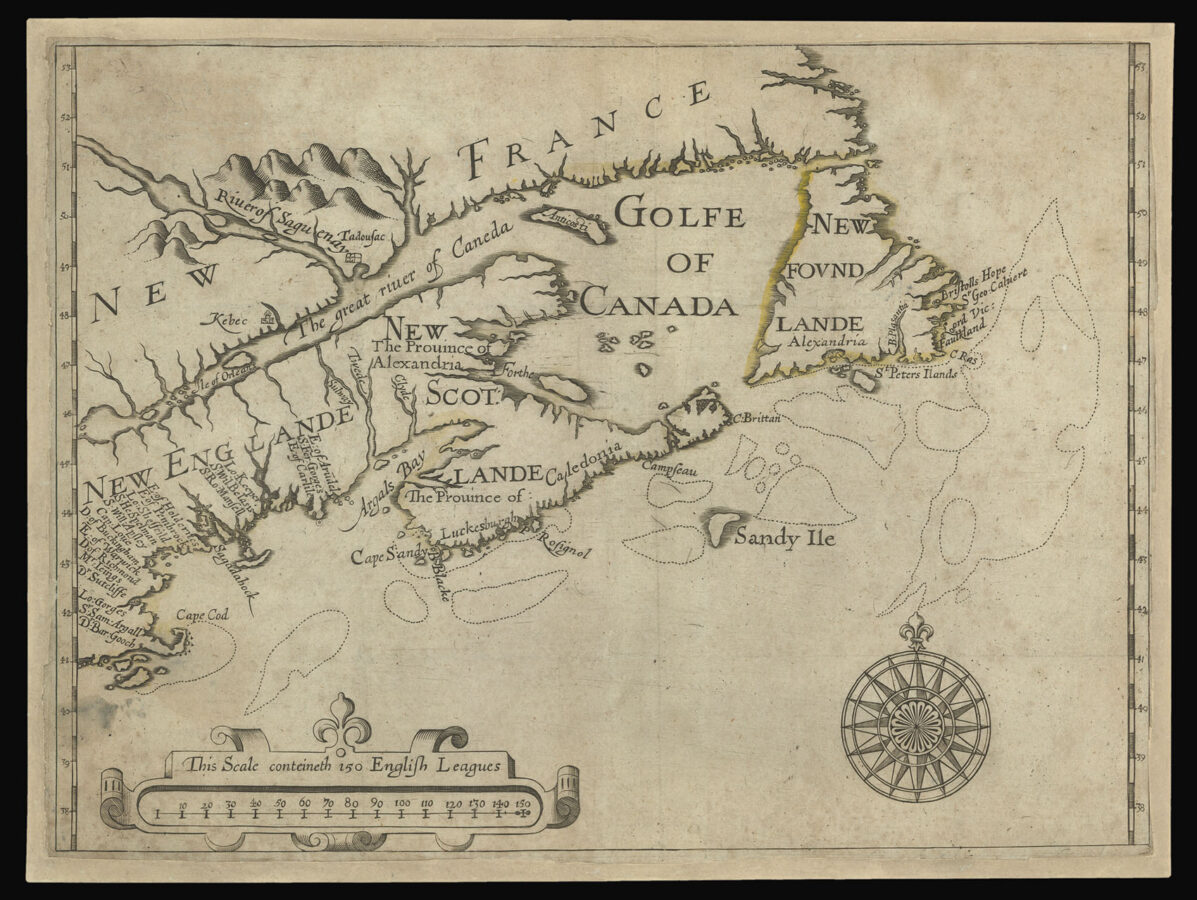 Alexander’s superb and very rare map of Nova Scotia, designed to encourage emigration to his new land grant in the new world, here in the first issue without page numbers in the top corners. Published in his ​“An Encouragement to Colonies”, 1624, the map extends from Newfoundland and the grand banks in the northeast to Cape Cod in the southwest, and shows ​“New France”, ​“New Scotlande”, the ​“Golfe of Canada”, the ​“River of Saguenay” and ​“The great river of Caneda”. All with some significant new cartography: the first appearance of the name ​“Kebec” on a map; he names the settlement of Alexandria, in Newfoundland, and the Province of Alexandria in Nova Scotia, after himself. The map ​“is of great importance… [and] reflects Alexander’s Scottish interests, with many placements having their origin in that country. Newfoundland incorporates some of John Mason’s as yet unpublished cartography, particularly of the west coast… What we believe to be Prince Edward island is recorded. This was noticeably lacking from earlier maps of the area” (Burden). The coast of New Englandeshows the land allocated to twenty English noblemen members of the Council of New England in 1623. Untitled, the scale appears in a fine strapwork cartouche lower left, with a large compass rose lower right.

William Alexander, first Earl of Stirling (1567–1640), was a court favourite of James I (James VI of Scotland) and a poet. James gave him a territorial grant to found the colony of New Scotland in 1621. However, in a move that was designed to cause trouble, his grant overlapped in part with the grant given to the newly formed Council for New England.

​“England laid claim to the eastern coast of North America by right of John Cabot’s landfall in Newfoundland in the reign of Henry VIII. Between New England and Newfoundland, the territories actively exploited, there lay what is now New Brunswick and Nova Scotia, untouched by English enterprise. It was there that Alexander hoped to found a colony of New Scotland, but in doing so took no account that this territory had already been claimed by France, named ​‘La Cadia’, and to some extent colonized. Even though the French do not seem to have been active in the area in the 1620s, the grant that Alexander secured from James on 29 August 1621 of the lands not only of the future Nova Scotia and New Brunswick but also of the Gaspé peninsula and the islands of the Gulf of St Lawrence posed a threat to the colony of New France about Quebec. It was, however, Scottish indifference rather than French hostility that obstructed Alexander’s scheme. A ship finally left Kirkcudbright in June 1622, but a storm drove it back from Cape Breton to St John’s, Newfoundland, where the party decided to winter. He dispatched a second ship with supplies in March 1623, which arrived to find the key members of the expedition, the minister and the blacksmith of the first boatload, dead. Immediate settlement was postponed, and after some prospecting of the coast for future settlement the ships returned to Britain.

​“Alexander was now £6000 out of pocket but could not afford to give up. In 1624 he published ​“An Encouragement to Colonies”, a treatise recommending his scheme as one that would ​‘spread the gospel and secure lawful increase of commerce’ (sig. A4). His ideas are general and show little acquaintance with the realities of settling in America. He recommends its solitude, for example, to those who would pursue the contemplative life. At the same time he hoped to make settling more attractive to the Scots by carving up the territory into baronetcies. He persuaded James to issue a proclamation in November 1624 founding the knights baronets of Nova Scotia. This provided that 100 gentlemen, on the payment of 1000 merks to Alexander and the furnishing of six men to the colony, would gain a hereditary title and 30,000 acres of land to be held in free baronetcy under the king, of which 14,000 acres ​‘were for the use of the Crown as sites for churches, schools etc’ (McGrail, 91). Few took advantage of the offer and the new order ran up against jealousy of the Scots feudal orders about precedency. Sir Thomas Urquhart’s jibe ​‘He was born a poet and aimed to be a king’ expressed the disdain and fear aroused among his class (Urquhart, 168). But Alexander had remarkable backing from James and then from Charles. Objections were rebuffed and the process of getting patents to baronetcies expedited. And still the response fell miserably short of the required complement.

In 1628 Alexander sent out a third expedition with his eldest son (also Sir William) in charge. A report of that expedition, ​‘A voyage to New Scotland’, presumably taken down by Drummond of Hawthornden from conversation with Sir William (NL Scot., Hawthornden MS 2061, fols. 148–50) records the setting up of two forts, the second near the remains of an abandoned French one at Annapolis. Sir William returned to Britain in November and then set off again for New Scotland in March 1629, where he spent the winter. But all this activity had been undertaken while England was at war with France and had been associated with hostile designs on Quebec. I“ndeed, his father’s patent in the New World had been enlarged in February 1628 to take in both banks of the St Lawrence almost up to Quebec. The war ended in April 1629, and Charles had to deal with a French government now actively interested in its American dominions. He found that the dowry for Henrietta Maria would not be paid unless New Scotland was ceded to France, and in March 1632, by the treaty of St Germaine-en-Laye, Alexander’s New World possessions were made over” (David Reid for DNB).

Exceptionally rare: only this example has appeared at auction since 1960, separately, or within Alexander’s book.