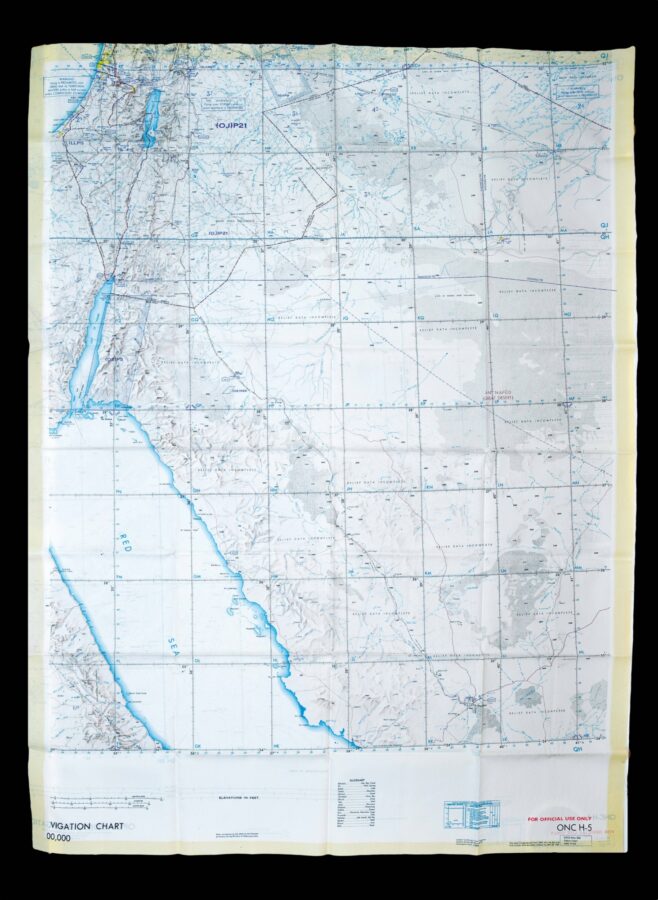 Operational Navigation Charts (ONCs) were used by British military forces throughout the latter twentieth century, issued to Special Forces and Aircrew. Based on topographic maps produced by the American Defence Mapping Agency at a scale of 1:1,000,000 metres, they spanned a wide region and were designed to help pilots to identify the area below them. Outlining different types of terrain, significant landmarks and notable topographic features, the charts allowed pilots flying between 2,000 and 25,000 feet at high speeds to efficiently and accurately recognise their location. In the event of an unintended landing, ONCs doubled as Escape And Evasion Charts, their durable material making them suitable for harsh conditions and also easy to hide.

ONCs were two-sided, with a different map printed on either side. To the recto of the present example is ONC-H‑5, showing parts of Saudi Arabia, Iraq, Jordan, Israel and Egypt, while the verso, ONC-H‑6, focuses on the central Saudi region of Riyadh. Toponyms are minimal, with only most important cities and sites labelled by name, such as Damascus, Riyadh, Baghdad and Medina (check that it is Medina!!), but relief, rivers, bodies of water, routes and settlements are all depicted in detail. Relief is shown by contours, shading, tints and spot heights, with warnings in several regions that ​“relief data incomplete”.

Along the lower edge of ONC-H‑5, there is a simple glossary giving the English meaning of Romanised Arabic terminology; to the left of ONC-H‑6, there is a great deal more useful information. Legends explain ​“maximum elevation data”, ​“spot elevations” and ​“aeronautical information”, while symbols and diagrams explain further details. At the bottom of both maps are three-part scale bars.

This edition of ONC-H‑5 and ONC-H‑6 was published in 1969, in a period of waning British influence in the Middle East. During the later stages and aftermath of the Second World War, the British government had responded to the growing tide of nationalism in many Arab countries by attempting to ingratiate itself with the newly formed League of Arab States. Their efforts, however, were largely thwarted by anti-Western feeling, greatly encouraged by Soviet influence in the region, which was on its way to becoming a secondary arena for Cold War tensions.

Furthermore, during the following decade, the United States began take over what had been the British monopoly on Middle Eastern oil concessions. America thus started to exert more diplomatic power in the region, especially in Saudi Arabia, where it established an air base, built the Trans-Arabian Pipeline (marked on ONC-H‑5), and became the dominant foreign source of arms. In contrast, Anglo-Saudi relations were compromised by the Buraymi Oasis Dispute, which led to armed conflict between Saudi Arabia and local tribes supported by British forces between 1952 and 1955. In 1955, the western powers made a final attempt to promote its influence in the Middle East with the. Baghdad Pact, a multilateral military aid treaty signed by Britain, Iraq, Turkey, Iran, and Pakistan. With the exception of Iraq, every other Arab state refused to join the Pact, again demonstrating the decline of British authority in the region.

This decline was consolidated by the events of the 1960s, as revolutions in Syria, Iraq and Libya saw the ascendence of radical anti-Western regimes, Britain was forced to evacuate its important military headquarters at Aden, Yemen, the British economy was weakened by the closure of the Suez Canal during the Arab-Israel War, and Prime Minister Harold Wilson announced, at the beginning of 1968, withdrawal of all British forces from the Persian Gulf by the end of 1971.

The present maps were produced during this turbulent period of Middle Eastern history, in which Britain found itself increasingly side-lined. Restrictions on western presence and authority in the region is demonstrated by legends on the map warning that ​“flying over JORDAN without prior approval is PROHIBITED” and ​“all aircraft overflying IRAQ must remain within the boundaries of airways, advisory routes or permitted flying routes unless otherwise authorised by ATC”. 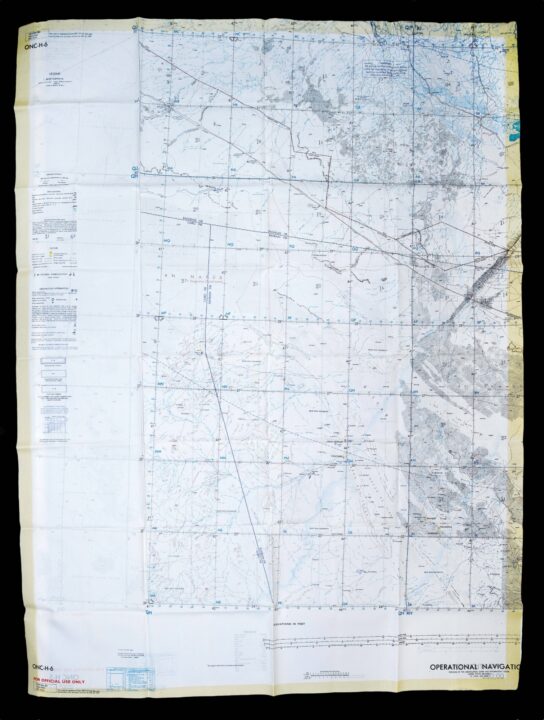