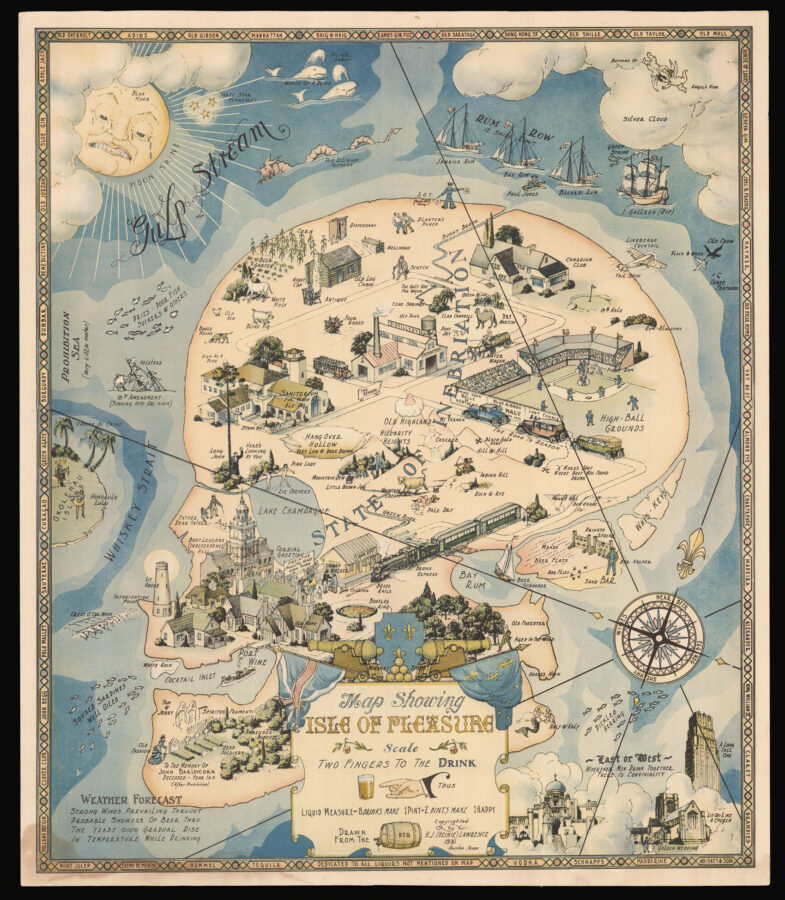 A fine example of a fanciful pictorial map of an imaginary island, labelled the ​“State of Inebriation,” in the form of a human skull, surrounded by waters such as the ​“Whiskey Strait”, ​“Gulp Stream” and the ​“Prohibition Sea”.

Published during prohibition, the map is a satirical celebration of both the joys of drink. It is replete with alcoholic references in the form of witty vignettes, double entendres and boozy puns. Among the most notable of these scenes is the shipwreck of the 18th Amendment in the ​“Prohibition Sea. The ship is ​“Sinking into Oblivion” with one of prohibition’s primary advocates, Andrew J. Volstead, clinging on to the mast before going down with the ship. To the north of the island, ​“Rum Row” depicts liquor smugglers (whose ships have apt names: Jamaica, Bay and Bacardi). They are crossing the ​“12 Mile Limit”, which was the recently extended limit of international waters (and is also the name of a prohibition-era cocktail). Amongst the smugglers is a lonesome boatman, Paul Jones (a type of bourbon) approaching the shore with an illicit shipment. Other comical landmarks include, ​“Hangover Hollow — Very Low & Dark Brown”, ​“Lake Champagne” and a ​“Sanitorium — For Those Ale-ing”. The map itself is bordered by names of liquors, and is dedicated to the alcoholic beverages ​“Not Mentioned On [the] Map”. Despite the map’s evident anti-prohibition sentiment, the island is in the menacing shape of a skull — a grim reminder of the dangers of alcoholism. Lawrence is evidently preaching against prohibition, while at the same time exhorting his listeners to practice at least some moderation.

Interestingly, the map’s creator was an architect rather than a cartographer, hence the inclusion of the three intricately drawn buildings in the lower right corner of the map. Lawrence’s final message in his only known cartographic work is stated at the lower right of the map, ​“East or West — Wherever Man Drink Together — There is Conviviality”. Lawrence’s map owes much of its subject matter and design to an earlier 1925 ​“Map of Pleasure Island,” by New York based artists Ernest Clegg and Arthur Crisp.

We are only able to trace three copies of this map in institutional collections (NYPL, Cornell, Stanford).