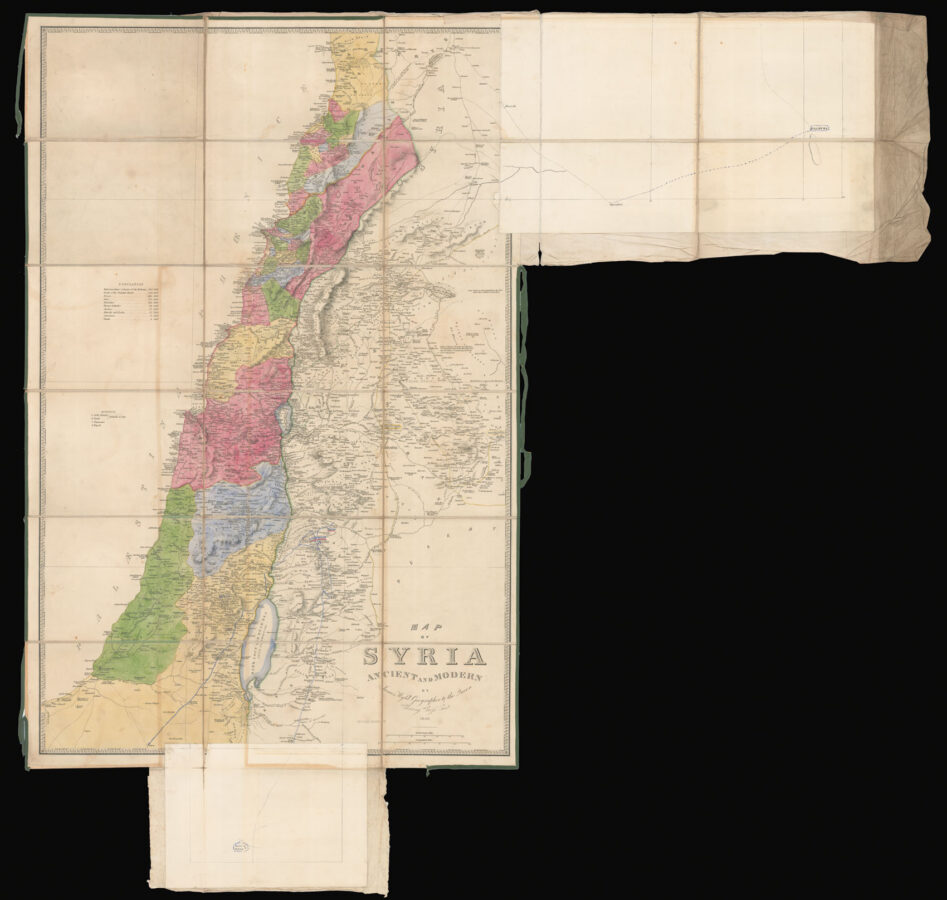 A Wyld trip to the Holy Land

Map of Syria ancient and modern by James Wyld, Geographer to the Queen, Charing Cross East, 1840.

This detailed map of Syria, published by James Wyld in 1843, has been extended by hand to present the important historical sites of Palmyra and the Ruins of Petra. The ​‘Syria’ shown on Wyld’s map is that of the Ottoman provincial territory, a region which now exists as Palestine, Israel, Gaza, Lebanon and part of Jordan, as well as modern Syria. This map is just as much a historical source as a geographical one, with numerous notes providing information about the contemporary and classical places of interest stretching back as far as the Phoenecian period. Unsurprisingly, the most dense text is found surrounding Jerusalem, which is outlined by hand in ink, but the rest of the map is nonetheless saturated with explanatory labels, as well as with colour, used to distinguish separate districts.

During the expansion of the British Empire in the nineteenth century, the area shown here began to play on the minds of the colonialist government, both as a buffer between India and the ever-advancing Russians, and as a potential solution to the problem of how best to travel to India. The Eastern Question, as it was known, also came to dominate the work of British geographers, who devoted ​“unvarying attention” to the lands of Mesopotamia, Syria and Arabia (Goren). In 1840, the English army was dispatched in an attempt to end Egyptian rule in Palestine and Syria, and to reinstate Ottoman control. As part of the campaign, a team from the Royal Engineers conducted surveys of several coastal cities, and mapped Jerusalem in 1841. This plan of the city was later engraved in London and also sold by James Wyld. Wyld’s own map of Syria had been published the previous year, and this example is a second edition. We have been able to trace only one institutional example of this 1843 edition, held at the Spanish National Library, and two more on the market.

This example is made unique, however, by the two additional manuscript panels which extend its range to include Palmyra and the Petra. There are also manuscript lines and boxes drawn on the map, presumably by the same hand, although the author remains anonymous. These additions suggest that Wyld’s map was used as a template by a traveller planning the itinerary for a journey through the region. Throughout the seventeenth, eighteenth and nineteenth centuries, it was typical for young men of the upper classes to undertake a ​‘Grand Tour’ after coming of age. The progress made in technology and communications during the nineteenth century made it possible for these tours to extend further afield, meaning that this map may have been used to plan such a trip. The owner may even have been inspired by the images of the area published from 1842 to 1849 by David Roberts. In 1838 Roberts, a Scottish painter, had undertaken the long journey to Syria, where he captured the landscape and architecture in hundreds of sketches and paintings, which he subsequently published as lithographs in his large volumes, ​‘The Holy Land’. The
present map is evidence of the cultural attractions offered in Ottoman Syria, and also demonstrates the ways in which mapmaking was still limited at this time, with travellers forced to add their own hand-drawn extensions to available maps.