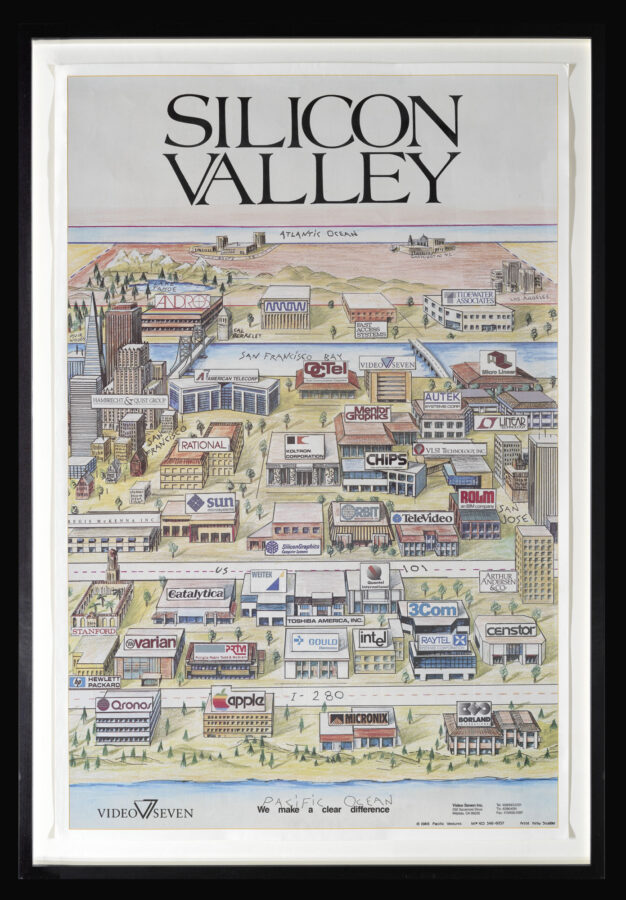 A view of the world from Silicon Valley: a promotional parody of the iconic New Yorker cover

A view of Silicon valley in its early days, parodying Saul Steinberg’s classic New Yorker cover, ​“View of the World from 9th Avenue”.

This view shows Silicon Valley, and the offices of its important technology companies, looming large in the foreground. Among the companies named are Apple, Hewlett Packard, Intel, and Video Seven Inc, who commissioned this poster. As the view recedes across San Francisco bay, there is a humorously foreshortened view of North America, with much smaller views of Lake Tahoe, Los Angeles, Washington D.C. and Boston (with, of course, MIT). Further in the distance is the Atlantic Ocean. ​“Silicon Valley” is written at the top of the image in the New Yorker’s instantly recognisable font. By appropriating Steinberg’s image, a self-aware joke about New York City’s self-centredness, Silicon Valley lays claim to its own feelings of self-importance. Funnily enough, they weren’t entirely wrong, as the next few decades of innovation and economic success would prove.

The company that produced this image, Pacific Ventures, appears to have been a venture capital firm in the area that was involved in the technology sector. However, we have been unable to find mention of a Pacific Ventures operating at this time in Silicon Valley, though there was a explosion of such companies in the area following Apple’s 1980 IPO. Nonetheless, the statement behind this image would have served a Silicon Valley based investment firm well. Pacific Ventures produced at least one other version of this poster in 1984 (see stock #14949). This poster was completely redrawn by a more competent hand and has numerous additions and revisions, bringing the expanding Silicon Valley’s corporate geography up to date as well as simplifying non-promotional parts of the image.

Saul Steinberg’s ​“View of the World from 9th Avenue” appeared on the cover of the New Yorker in March 1976. It has since become one of the most popular and recognisable covers in the magazine’s history, and it has spawned countless parodies as every city from Boston to Omaha clamoured to make a version of their own. Steinberg is quoted in a 2001 New York Times article as having said that, if he had received the proper royalties, ” I could have retired on this painting.“

Kirby Scudder is an artist and illustrator currently based in Santa Cruz, CA. From 1985 to 1990 he produced over forty promotional posters for the San Francisco based company Access Media. Many of his posters, showing cities from Boston to Santa Cruz, also parody Steinberg’s original.