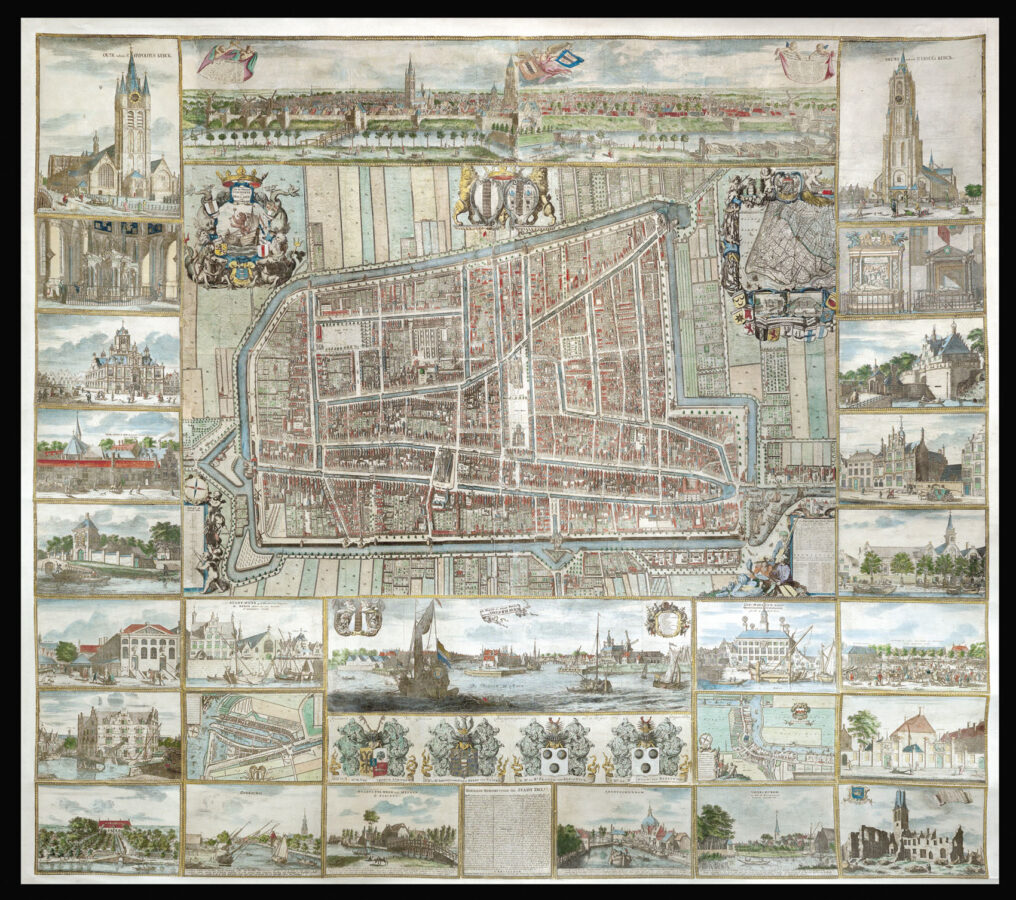 This fine plan was produced under the stewardship of Dirck van Bleyswijck. Van Bleyswijck (1639–1681) was born into a prominent Delft family and would later become sheriff, orphan master and burgomaster. In 1667, at the tender age of seventeen he published the first volume of his Beschryvinge der Stadt Delft (The Description of Delft), the second volume of which would appear in 1680. The work detailed the history of the city, its monuments, and its most famous historical figures. So impressed were his fellow citizens by his work that he was made burgomaster of Delft in 1675, and was commissioned by them to coordinate the production of a large wall map of the city.

The surveying for the plan was carried out by Jacob Spoors, with Johannes de Ram being engaged to engrave the map. The fine cartouches that adorn the plan were the work of the great Baroque artist Romeyn de Hooghe. The resultant work depicts Delft in birds-eye view with the houses, churches, public buildings, streets, and canals all beautifully rendered. Beyond the city walls lie a patchwork of fields, in which can been seen numerous cows, together with the occasional stork, which were encouraged to build nests in the city, as they were believed to bring good luck. The cartouches tell of Delft’s maritime and trading might, from Neptune mounted on a sea horse to the upper left to citizens depicted surrounded by the city’s most important products of faience and cloth, in the lower right. Above and below the plan are prospects of Delft and Delf Haven respectively. Also to the borders are 24 views of the city and its suburbs; the four coats-of-arms of the principal burgomasters; and a brief description of the city.

The present work is the second issue of 1703 with the Armentarium, which had been built in 1692, depicted for the first time. Only two institutional copies of the map can be located: one at the National Gallery of Art Library, Washington DC, and the other at the Stadhuis, Delft.