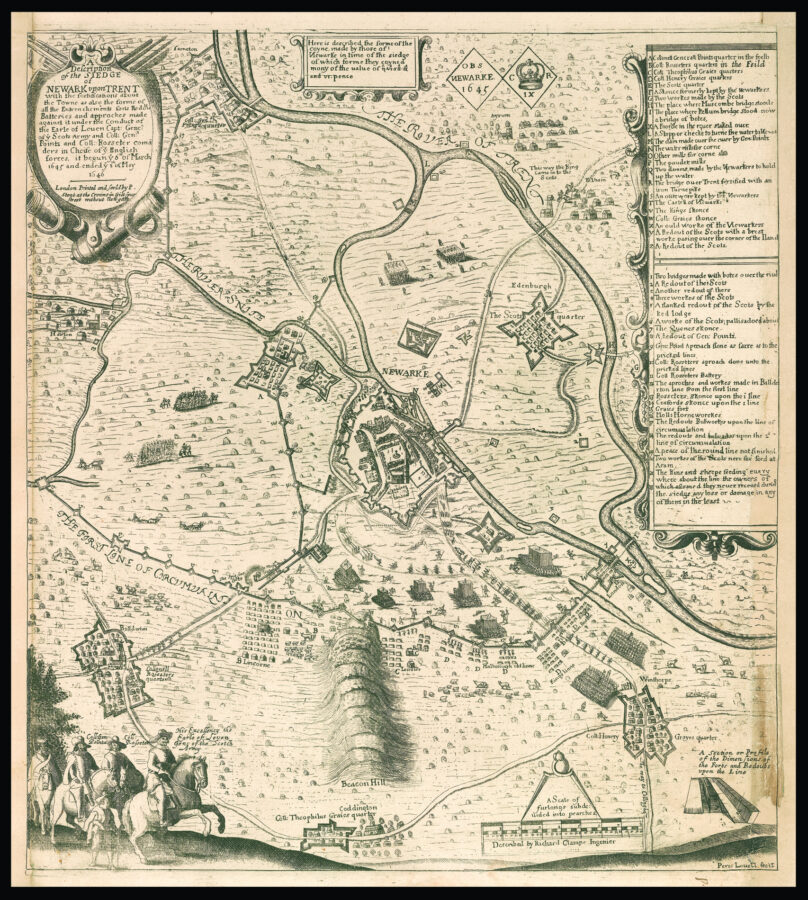 A rare plan of the siege of Newark-on-Trent

A Description of the Siedge upon Newark on Trent with the fortifications about the Towne as also the forme of all the Entrenchements forts Redouts Batteries and approaches made against it under the Conduct of the Earle of Leven Capt: Genll: of the Scots Army and Coll: Genll: Pointz and Coll: Rosseter commanders in Cheife of the English forces, it begun the 6th of March 1645 and ended the 8th of May 1646

A rare broadsheet battle plan showing Newark-on-Trent and the country around during the English Civil War third and final siege of the town.

Positioned where the Great North Road and the Fosse Way cross the River Trent, Newark was during the war at an important strategic communications crossroads. On one side, it connected the Royalists’ headquarters in Oxford to their centres in the northeast, such as Notthingham, where Charles I had raised his standard. On the other side, it attracted the attention of the Parliamentarians, since they had a strong command of much of the Midlands.

The town was first besieged for two days in February 1643. The second siege lasted longer, from 29 February to 21 March 1644. The third siege was prolonged from 26 November 1645 until 8 May 1646. In this final stage, the town was attacked from the north by the Scottish army lead by General Alexander Leslie, the first Earl of Leven. Gaining control of Muskham Bridge, the Scots managed to settle on the strip of land between the two streams of the river Trent to the west of Newark, where they eventually built a 400 foot square earthwork with bastions named ​‘Edinborough’. Meanwhile, General Poyntz, Colonel Rossiter and Colonel Grey stationed their garrisons in the villages of Farndon in the south and Winthorpe in the north. The town was completely surrounded, with the rivers linking the two armies and aiding communication. After a harsh winter and numerous attacks, the town rapidly became in short supply of food and rife with plague. Oxford was also about to be besieged by Parliamentary soldiers, leaving the Kings’ only option that of surrendering the north to the Scots. One sixth of Newark had been completely destroyed, making it a long stretch until complete recovery.

The plan is finely detailed, showing the garrisons around Newark and the soldiers positions. On the top left of the map, by the village of Farneton, are the quarters of General Poyntz. Following the stream and on the letter M is the dam constructed by the General in an attempt to divert the river and cut the water supply to Newark. The island to the right of Newark shows the Scots quarter named Edenburgh. Further down, where the streams unite, starts the line of circumvallation with all its forts and redoubts, ending on the river Snite. Cattle and sheep, as well as the soldiers making approaches, fill the fields.

Lovell (fl.1646–1653) is also known for his engraved portraits and is believed to have been a pupil of Wenceslaus Hollar.

We can find only two institutional copies, one at the British Library and one at the Ashmolean Museum in the Sutherland Collection.