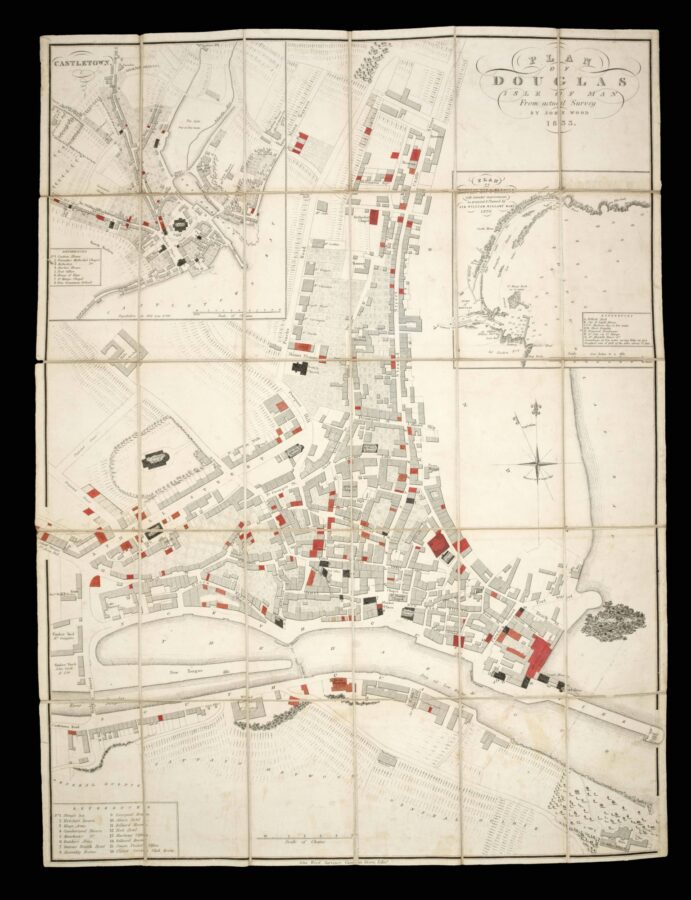 John Wood (c1780-1847) was a land surveyor based in Edinburgh, notable for his town plans and for producing the first systematic town atlas of Scotland. The collection comprised 48 large scale maps, for which Wood had financed the surveys by soliciting commissions from local corporations, and included names property of owners and indications of land use.

The present plan follows a similar concept by providing a detailed representation of the town, with the names of streets, important buildings and landowners. During the eighteenth century, Douglas had become a thriving port-town, with imposing merchants’ houses and large warehouses; its strategic position making it a centre of running trade (smuggling). During the early nineteenth century, with poor sanitary conditions and housing, the town often suffered epidemics, particularly of cholera. However, through urban improvements and additions such as a hospital, the town transformed into a leading holiday resort from 1870 onwards.

One particular area that required improving was in the bay. St Mary’s Isle, or Conister Rock, was, and still is, a partially submerged reef just off the entrance to the harbour, a notorious hazard to shipping and the cause of many a shipwreck. As shown on one of the insets in the present plan, the isle had been the subject of a proposal for improvement by Sir William Hillary, a militia officer resident at Fort St Anne and the founder in 1824 of the National Institution for the Preservation of Life from Shipwreck, today’s Lifeboats. Sir Hillary suggested the construction of a tower (indicated as Martello Tower on the inset plan) as well as a Breakwater (letter E). Nonetheless, it was only after a particular incident in November 1830 with a steamer from Liverpool, that the proposed plans actually took shape.

The St George had arrived from Liverpool with mail and passengers, which were safely unloaded; during the night, the adverse sea conditions drove the boat away from its safe anchorage and led it to struck the rock, fill immediately and settle down forward. After a long and perilous rescue, the crew was taken to shore, with none of the lives lost. The 60-year old Sir Hillary participated to the rescue and it was thanks to his endeavours that the Tower of Refuge was built on the isle two years later, both to signal the danger, as well as provide shelter to mariners. The Breakwater was not built until 1862.

The other inset shows Castletown in the south of the island and the Manx capital until Douglas took its place in 1869. A note below the plan indicates that the population in 1831 was 2000.

We are unable to ascertain what the red colouring signifies, whether it shows structures that required rebuilding, that belonged to the map owner, or perhaps, were clusters of epidemics.

Rare. We have been unable to trace another example appearing on the market, and we are only aware of one institutional copy (Isle of Man Public Record Office). It would appear that Wood’s maps were printed in very small numbers, with sometimes only one extant example.