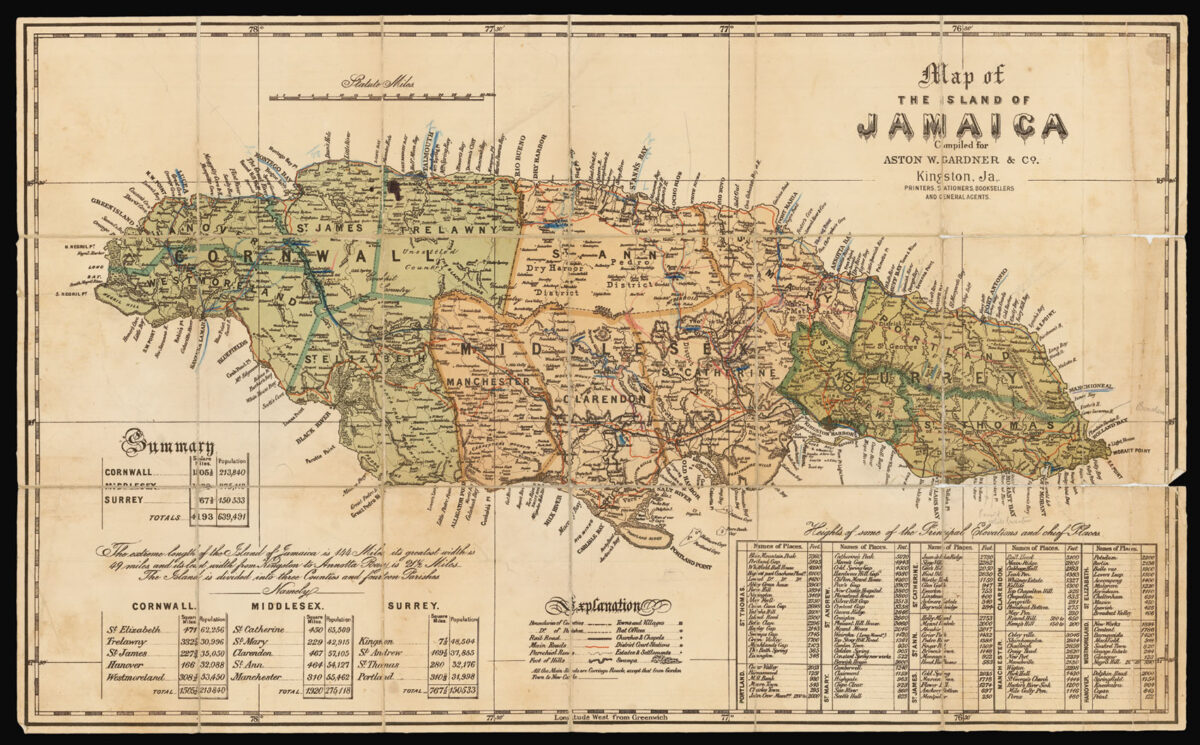 Map of the Island of Jamaica.

Aston W. Gardner & Co. were printers, stationers, booksellers and general agents based in Kingston, Jamaica, during the late nineteenth and early twentieth centuries. A number of postcards and books published by them survive; they are almost exclusively focused on the island itself, covering its history, geography, industries and peoples. These included several general guides to Jamaica, some of which were designed to ​“directly interest the tourist and the health seeker”. In 1893, Aston W. Gardner & Co. published ​‘Dr. Johnston’s Illustrated Guide Book’, which was accompanied by a map of the island prepared in the Public Works Department by Colin Liddell, acting government surveyor, on 26 January 1888.

The present map is based on Liddell’s map, but also presents a wealth of additional information beneath the main image, such as the size and population of various areas, as well as a table of the ​“Heights of some of the Principle Elevations and chief Places” in Jamaica. The map itself, on a scale of 1:400,000, shows the boundaries of the island’s three counties, Cornwall, Middlesex and Surrey, and the fourteen parishes within. Wailways, main roads and parochial roads, towns, villages, post offices, churches, estates and swamps are also identified. Particular attention is paid to the settlements and ports along the coast, where a huge number of toponyms appear. It appears that the present map was issued independently, rather than being included in one of the firm’s other publications, as Liddell’s map had originally been. In the mid-twentieth century, the London Geographical Institute would reproduce Aston W. Gardner & Co.‘s map, designed for use in Jamaican schools.

Rare: we have been able to trace only three institutional examples, at Yale University, Boston College and the University of Texas.

Annotated in pencil by a contemporary hand.