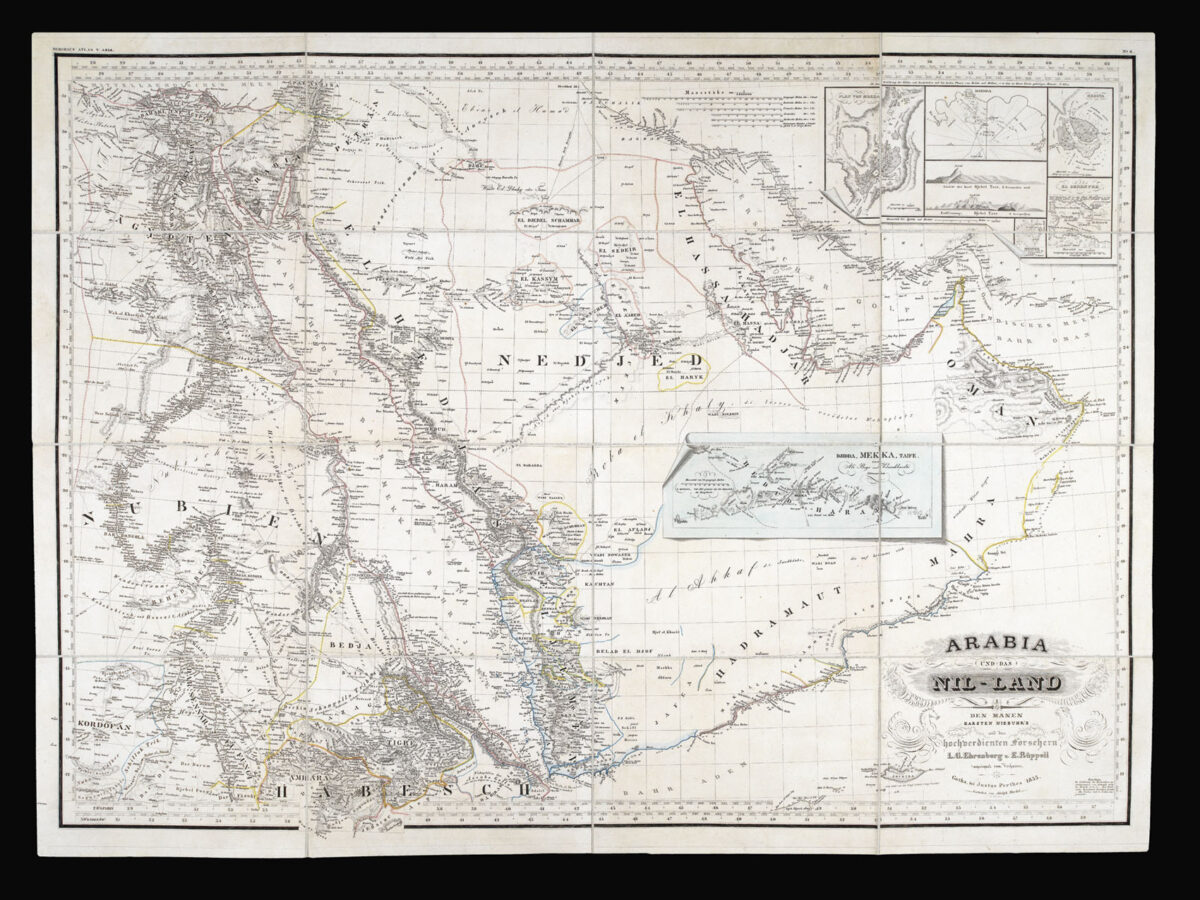 A rare and detailed map of Arabia

A rare and detailed map of the Arabian peninsula, showing additional views of Mecca and Medina.
Despite the key role that the Arabian Peninsula and waters had played in Mediterranean trade for centuries, European cartographers had paid surprisingly little attention to the area. The lack of rivers and waterways made Arabia particularly difficult to chart, but the exploration of the sixteenth and seventeenth centuries did see a number of new maps being produced. These, however, were generally littered with errors, which were then compounded as later mapmakers drew on the inaccurate work of their predecessors.
In the early nineteenth century, as the empires of the European states were rapidly increasing, there arose a renewed interest in foreign cultures and religions, a trend that came to be known as ​‘Orientalism’. As a result, explorers and cartographers began to venture further into the Arabian Peninsula, undertaking expeditions to trace the deep-rooted incense trails and pilgrimage routes to the holy cities of Mecca and Medina. For instance, a map published in England by Waugh & Innes in 1820, displayed the Hajj routes across the peninsula.
The present map was the result of German exploration in the region during the eighteenth and nineteenth centuries. Mathematician and cartographer, Carsten Niebuhr, had travelled around the Gulf from 1761 to 1767, and upon his return published a series of maps that opened the region up to the European eye. Following in his footsteps were two scientists, L.G. Ehrenberg and Eduard Rüppell, who voyaged over the Red Sea and through Ethiopia in the 1820s. The latter was the first European explorer to reach the Gulf of Aquaba, collecting zoological specimens. When both men had returned to Germany, the present map was published from their research.
The map shows Arabia as it was in 1835. At this time, the Khedivate of Egypt, a tributary state of the Ottoman Empire, controlled most of the land depicted, including Sudan, the Nubian desert, the Levant, large swathes of Arabia and the western portion of Yemen. Muhammad Ali Pasha, the leader of the Khedivate from 1805 to 1848, had won much of this territory in the first half of his reign, but the Al Saud family had continued to rule the Najd region which dominates the centre of the peninsula, outlined on the map in pink. In 1841, after Pasha’s unsuccessful rebellion against the Ottoman Sultan, he was forced to concede the peninsula, which has henceforth been under Saudi Arabian dynastic rule.
Of particular interest are the inset maps, which show the Holy Cities. The blue trompe l’oeil map in the centre presents the caravan route taken by pilgrims from Jeddah to Mecca, continuing on to Taife. Hachures show the relief of the surrounding mountains, and towns along the route are identified. Aerial plans of Mecca and Medina in the upper right corner provide additional perspectives on these important sites. The map offers a detailed representation of the coastal regions, which are heavily labelled with toponyms, and the waters of the Red Sea and Arabian Gulf feature islands, reefs and some soundings. It also displays some of the earliest printed representations of Dubai, Kuwait and Abu Dhabi.