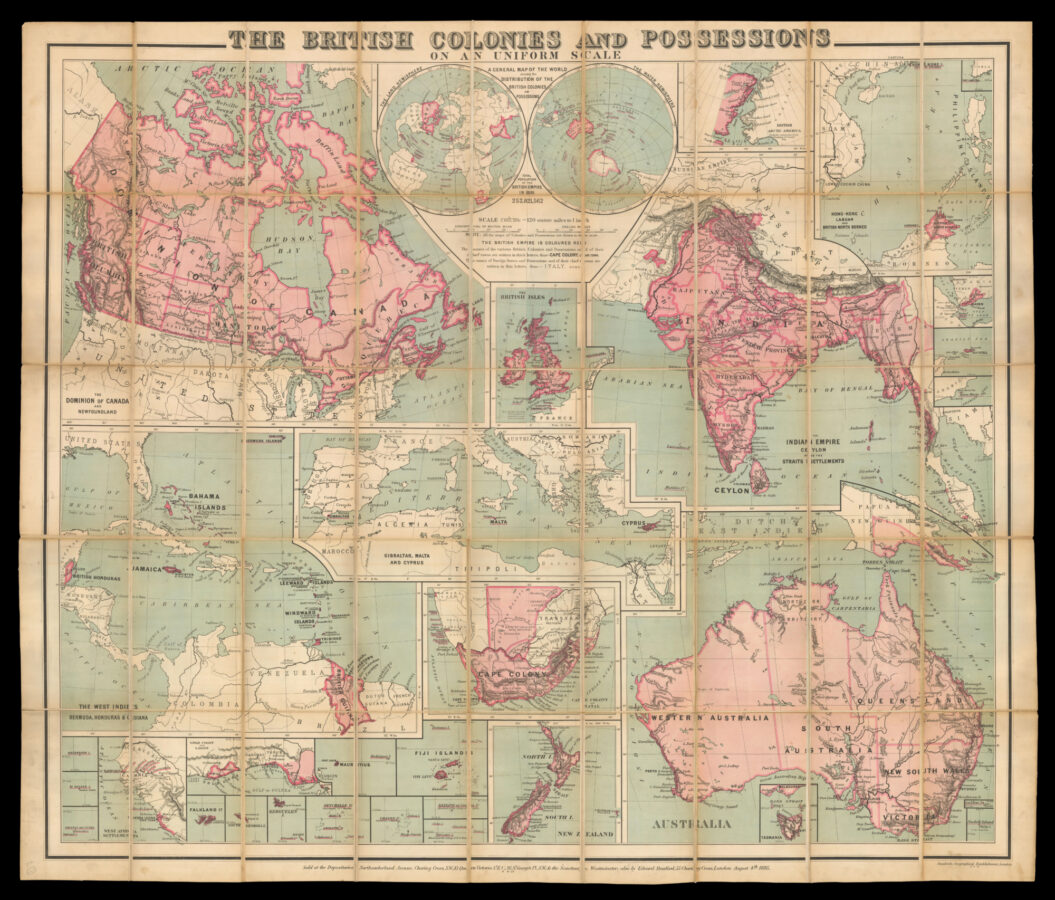 The nineteenth century saw the huge expanse in the size and breadth of the British Empire. By the time this map was published, in 1885, the Empire covered almost fifth of the earth’s land mass, and almost a fifth of the world’s 1.3 billion people.

Edward Stanford’s work charts all of Britain’s overseas possessions on one map, including the numerous islands in the south and Atlantic and Pacific Oceans, many of which still remain British dependancies to this day. To the upper centre is a double hemisphere world map, on a polar projection. The northern marked ​‘the land hemisphere’ and the southern ​‘the water hemisphere’, on which Stanford boldly lays claim to the whole of Antarctica. The work is dominated by the territories of Canada, India, and Australia. All British possessions are marked in red, with names in bold, or underlined in red.

The Royal Geographical Society magazine of 1885, wrote a short review on Stanford’s work:

​“At the present day, when Colonial Geography is beginning to claim its deserved share of educational attention, this new map of Mr. Stanford’s is a most useful publication. The different countries of the British Empire, drawn as separate little maps on a uniform scale, form a wall diagram of four sheets. The work is effectively engraved, but, although in most respects well up to date, the old boundary of Ontario, which was changed more than a year ago, is still shown. At the South Pole we are credited with the possession of an Antarctic continent more than twice the size of India, which, in appearance, certainly adds to the effect of the British Empire on the map, although we doubt if it has as yet been explored even by the polar bears”.

Although the reviewer is slightly critical how up-to-date some of the information on the map was, he does believe that polar bears reside in the Antarctic.

The imprint not only provides the address of Edward Stanford but also the London depositories for the Society for the Promotion of Christian Knowledge. The society had played a leading role in promotion of Chriistian teaching, in Britain and her empire since the beginning of the nineteenth century.

Rare. OCLC records only one institutional example of the 1885 first edition, housed at the British Library.