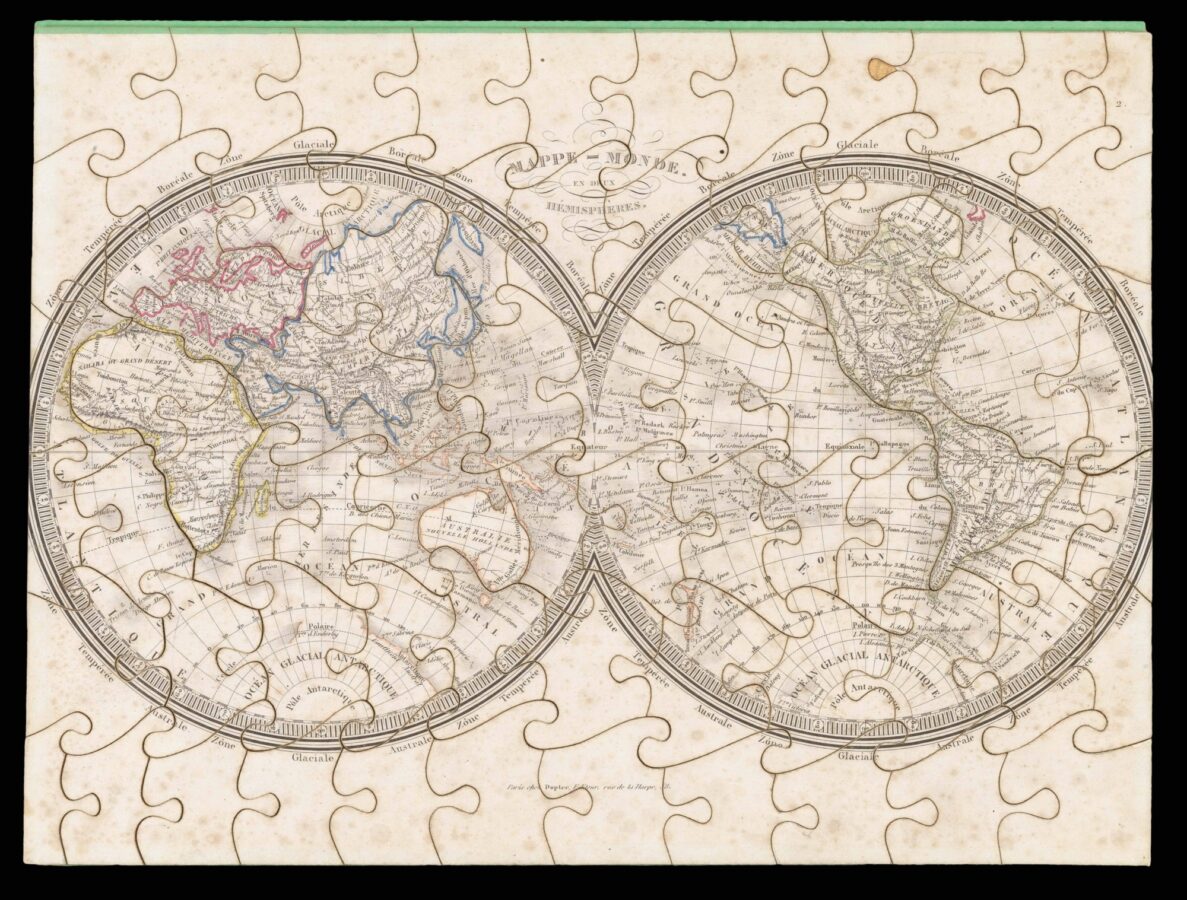 Presented in a decorative wooden case, these geographical jigsaws were given as an extravagent gift to two girls, Yvon and Henriette Pasquet, according to the dedicatory panel inside. The emerging children’s culture of the mid-eighteenth century produced toys and games that were often as ornamental as they were practical, and the demand for increasingly unique and interesting items eventually resulted in such puzzles. Although John Spilsbury is widely credited with creating the first dissected map in 1766, there are earlier references to these sorts of geographical games made by a Madame de Beaumont in France, where this example was also produced. Jean Vincent Marie Dopter became a prominent Parisian lithographer and printer in the 1830s, specialising in religious and political pamphlets, which were considered by some so outrageous that he was eventually sentenced to ten days in prison. Far less controversially, he also produced these puzzle maps, which earned him medals and honourable mentions at various exhibitions, including l’Exposition universelle de Paris, and the Great Exhibition in London. The dissected maps show named countries, exploration routes and the relief of major mountain ranges, making the puzzles an effective educational aid, and a literalisation of Lefebvre’s claim that ​“knowledge of spaces wavers between description and dissection”.

Such ornate sets were predictably expensive, and became popular mainly with the elite, among whom these items were made into symbols of status. In Jane Austen’s 1814 novel ​‘Mansfield Park’, for example, the poor protagonist is mocked by her wealthy cousins because she ​“cannot put the map of Europe together”. This set of games, then, would have been an extravagant present, worthy of the Countess de Turgot who gifted them. The wooden box contains seven jigsaws, displaying one world map, a map of France divided into departments, and maps of the continents of Europe, North America, South America and Asia. The engraved maps were printed, hand-coloured, glued onto card, and then dissected into 70 to 80 pieces. They are separated by boards bordered with the same green paper that lines the inside of the box. They all identify Dopter’s address as 58 rue de la Harpe, apart from the map of Europe, which lists number 66 as its place of publication. As is the inevitable fate of almost all toys, a few parts have been lost, leaving two holes in the maps of North America and France. Other examples of Dopter’s Atlas set also contain a puzzle depicting Oceania, which is not included here. We have been able to trace only two institutional examples of this set of geographical puzzles, at the State Library of New South Wales and the Bibliothèque nationale de France. 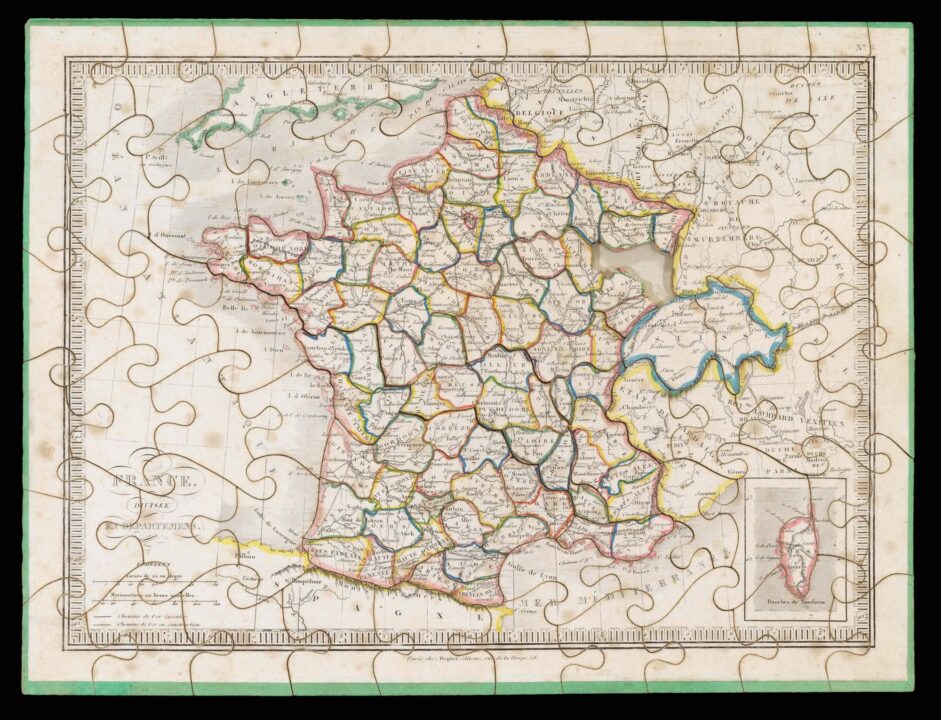 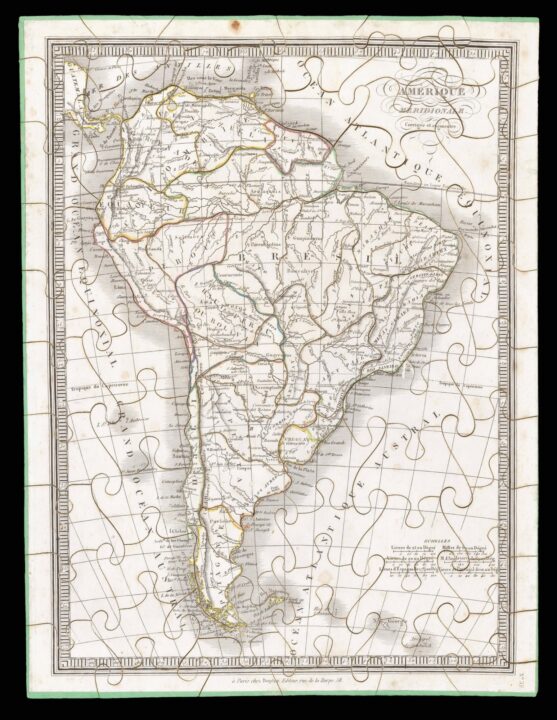 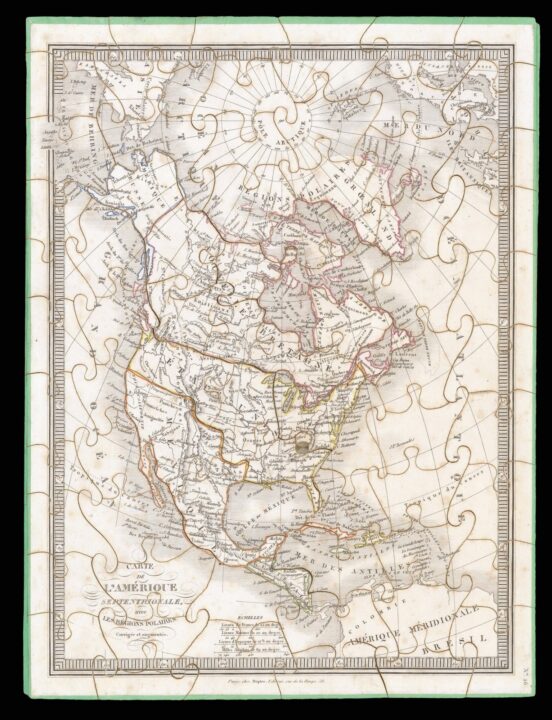 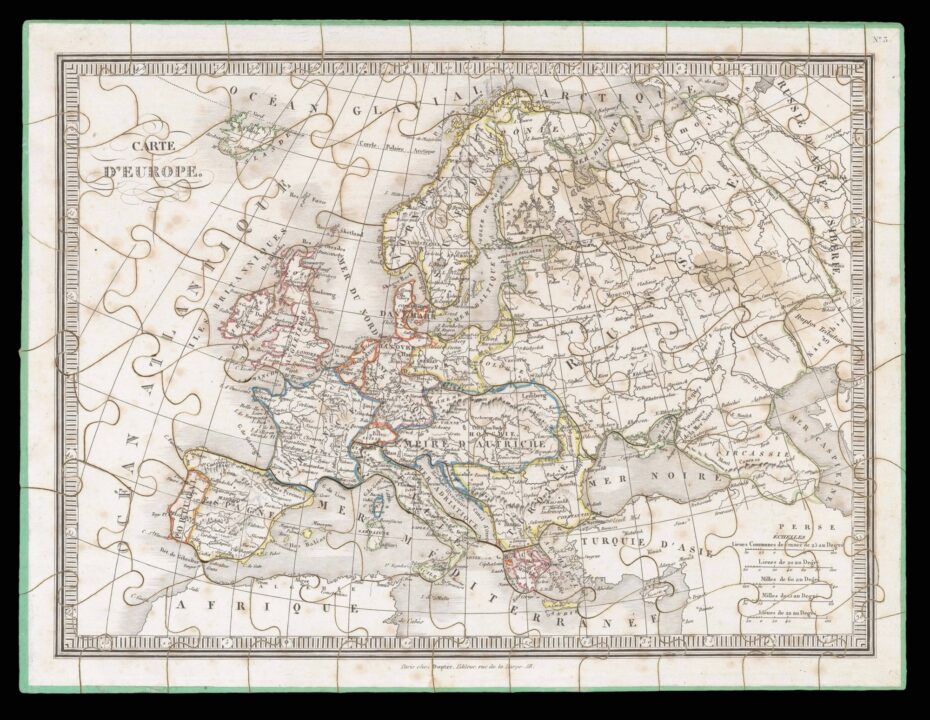 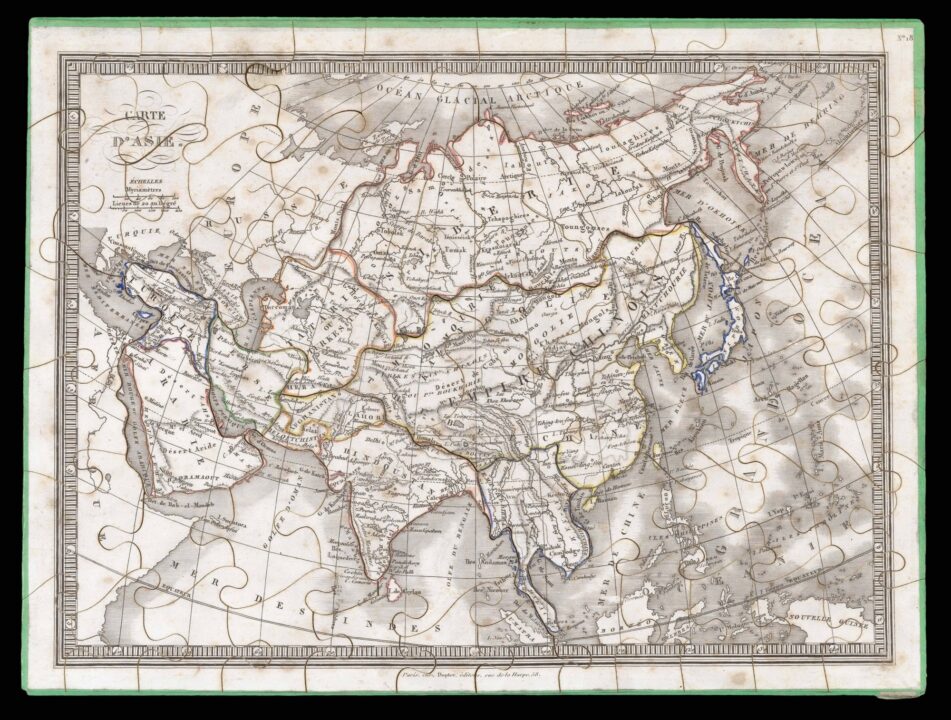 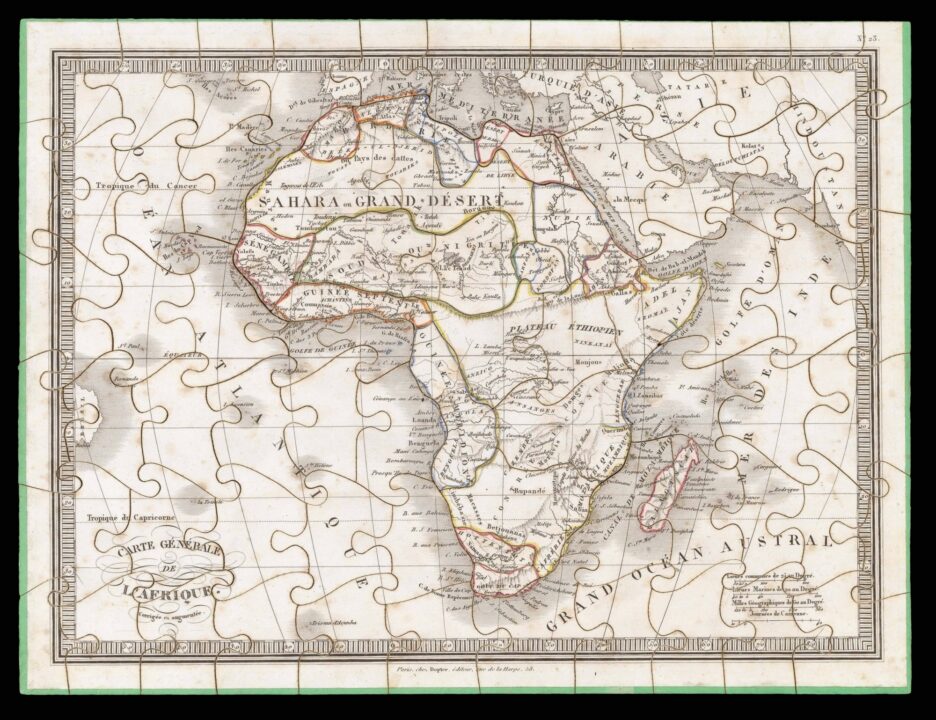 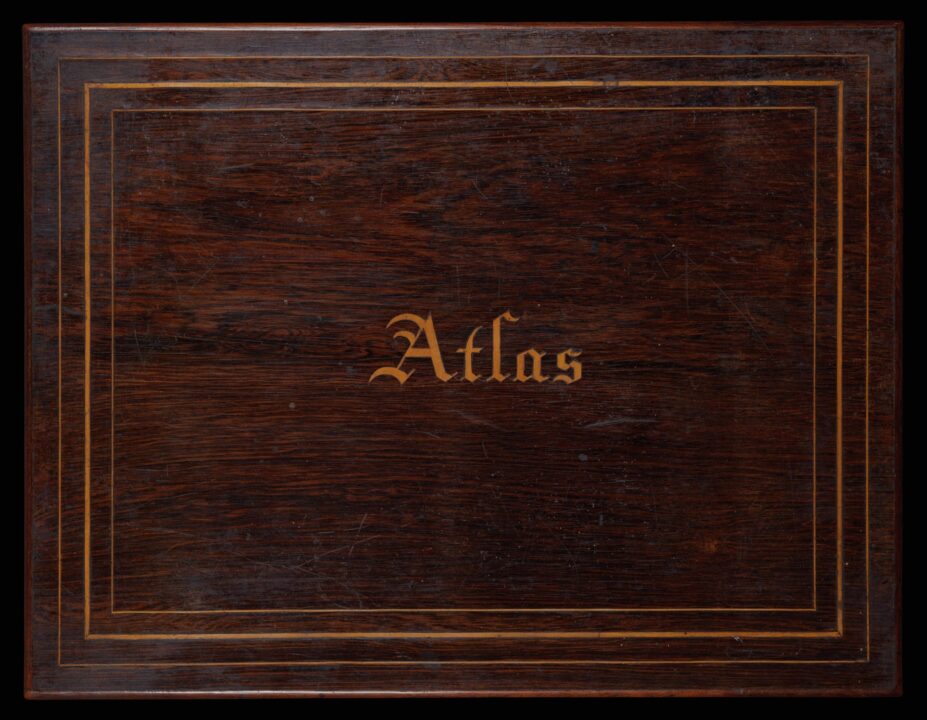 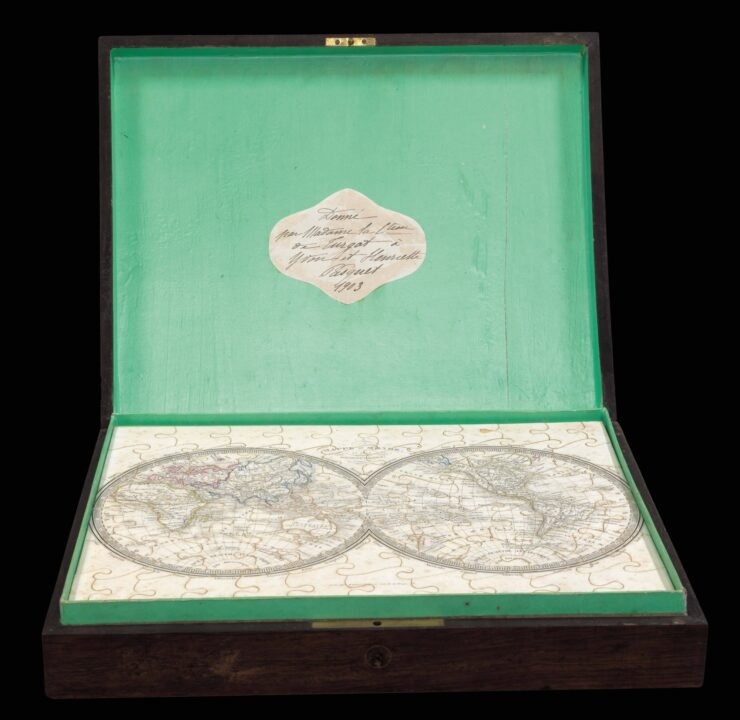