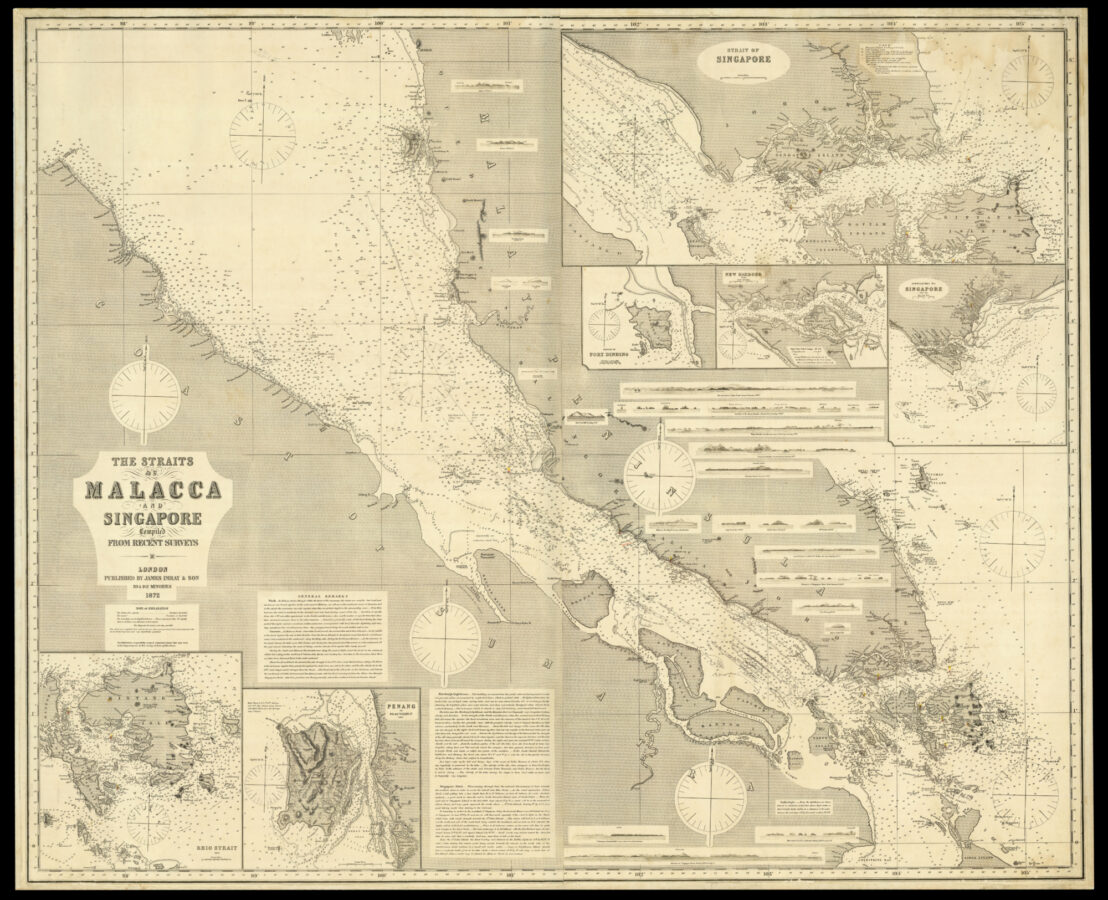 The Straits of Malacca and Singapore Compiled from Recent Surveys

Even though the early Dutch and English voyages to the Spice Islands had used the Sunda Strait to access the Indonesian archipelago, the most proven route to the Moluccas was via the Malacca and Singapore Straits, held by the Portuguese from 1511 to 1641, when it came under Dutch rule. It would still be nearly two hundred years before the English turned their attention in earnest to gaining the strategic advantage of present-day Singapore at the eastern entrance to the Straits.
In 1818, Sir Thomas Stamford Bingley Raffles, FRS (1781 – 1826), who was the then disgruntled Lieutenant-Governor of the British settlement of Bencoolen in southwest Sumatra, persuaded the EIC to establish a base at Singapore, the strategic location of which Alexander Hamilton had identified in 1703: ​“a proper place for a company to settle a colony on, lying in the center of trade, and being accommodated with good rivers and safe harbours, so conveniently situated that all winds served shipping both to go out and come into those rivers” (reported by Suarez).
British control of the strategic island of Singapore helped to establish their supreme dominance of the China trade during the 1820s. It was soon settled by Europeans and Chinese, and became a financial centre, as well as an international shipping hub. In 1824, the British signed an agreement with the Dutch, which carved up Southeast Asia between them: Britain held the mainland, and the Dutch the islands. British law had given the EIC a monopoly on the China trade, however, by 1833 that had been completely undermined by independent entrepreneurs.
The current chart supersedes all its predecessors and appeared almost exactly one hundred years after William Herbert’s ​‘A Chart of the Seas between the Straits of Banca and P.o Timon: with the Eastern Part of the Straits of Malacca’ (1767), then the first broadly accurate British sea chart of Asia’s busiest shipping lane. It had marked a milestone in the revival of hydrography sponsored by the EIC, and was a key chart used during the ascendancy of British economic and political power in Southeast Asia and the Far East.
Imray’s chart, first published in 1859, updated in 1862, again updated for this 1872 issue, is very detailed, and includes large-scale insets of the ​‘Strait of Singapore’, a ​‘Sketch of Port Dinding’, the ​‘New Harbour (1840)’, ​‘Approaches to Singapore (1827–54), ​‘Rhio Strait’, and ​‘Penang or Pr. of Wales Id. (1832)’, as well as nineteen coastal profiles. Notes that give detailed and vital information about currents, depth, and good anchorages, include ​‘General Notes’, and particulars for ​‘Horsburgh Lighthouse’, ​‘Singapore Strait’, and the ​‘Raffles Light’.
Beneath the title are a ​‘Note of Explanation’, or key, and one that ​“respectfully request[s] communications that may tend to the improvement of this or any of their publications”.This is followed by an honest acknowledgement of the chart’s limitations in a region of complex hydrography: ​“This chart was compiled from various surveys, but a great portion of the coast comprised within its limits has been only very imperfectly examined”.
Providing an inventory of highly accurate charts, each with up-to- the-minute information, had become a hallmark of the Imray firm. The company had risen to prominence throughout the 1860s, until the majority of the rapidly expanding British merchant fleet using Imray & Son charts in preference to those of the Admiralty, because they combined the information provided by those charts, as well as that of recent merchant- fleet and even non-British voyages. Characterised as relatively small scale, general charts, which conveniently gave an extensive overview of a particular voyage, complemented by many large-scale insets of strategic harbours.
​“As official surveys of Australia, New Zealand, the north-west coast of America, and the coast of Chile became available, Imray used them to compile charts designed for wool clippers, gold rush ships, and copper and nitrate clippers. As the influence of the East India Company waned and eastern seas opened to all British ships he published new charts of the Indian and Pacific oceans, followed by popular series of larger scale charts for the intricate passages through the eastern archipelago [as here] and on to China. Charts for particular trades were promoted with labels such as ​‘Rice ports of India’ and ​‘Cotton ports of Georgia’ ” (Susanna Fisher for DNB).
The founder of the Imray chart producing empire, James Imray, had died in 1870, and at the time of the publication of this chart, Imray’s elder son, James Frederick Imray (1829–1891), held the reins. He had become a partner in the book and instrument sides of the business in 1854, and the firm had changed its name to James Imray & Son. Soon there were no less than three locations associated with the company: charts were produced at 89 Minories; 102 Minories was a saleroom for charts and books, and the nautical academy; and 1 Postern Row was a shop selling instruments.
Rare: two examples of the 1859 issue are known, at the British Library and Chatham Historical Society; the National Library of Wales holds an example from 1862; and one example, from 1882, is known in commerce.