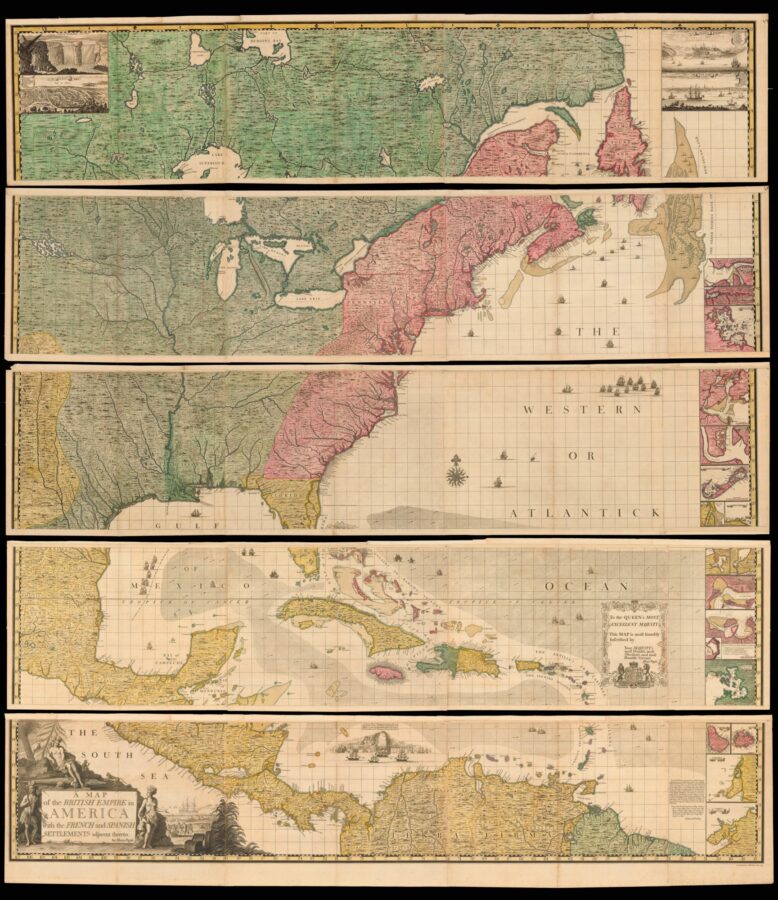 One of the two most important maps of North America published in the eighteenth century on a grand scale: along with John Mitchell’s ​‘Map of the British & French Dominions in North America’, Popple’s map was a profound statement of England’s designs for dominance of the North American continent; at a time when colonial control of North America was by no means certain.

Popple’s map is the first large scale printed map to show, and name, the thirteen British colonies. Nearly eight feet square when joined, the map shows the extent, not just of the British, but also the French, and Spanish colonial possessions of North and Central America, and the West Indies.

​“Little is known of Henry Popple, except that he came from a family whose members had served the Board of Trade and Plantations for three generations, a connection that must have been a factor in his undertaking the map, his only known cartographic work” (McCorkle). His father and grandfather both served as secretary to the board. When his father resigned, Henry’s brother, Alured, inherited the post. Henry was offered a clerkship in 1727. ​“Finding that position unprofitable, he resigned to work as a private financial agent for the West Indian governors and some British regiments. In that capacity he appeared before the commissioners on numerous occasions” (Pritchard & Taliaferro). Alured eventually accepted the post of governor of Bermuda, in which post he was succeeded by another brother, William.

This was at a period when boundary disputes among both the colonists, and with the French, began to accelerate the need for detailed maps of North America. In 1730 the Board began requesting maps of the entirety of the provinces and contiguous regions. At the time of its publication, ​“France claimed not only Canada, but also territories drained by the Mississippi and its tributaries — in practical terms, an area of half a continent” (Goss). Popple’s large format up-to-date map, produced under the auspices of the Lord Commissioners of Trade and Plantations, provides a clear illustration of how to better understand and demarcate all the rival claims.

On close examination, an engraved dashed line identifying the boundaries of the colonial powers can be seen. However, to facilitate a clearer visual depiction of these boundaries, Popple devised a colour scheme for depicting the claims of the various colonial powers. As noted by Babinski:

​“The typical coloring [sic] of fully colored copies… is described best by a contemporary manuscript legend on the end-paper affixing the Key map to the binding in the King George III copy at the British Library: Green — Indian Countrys. Red — English. Yellow — Spanish. Blue — French. Purple — Dutch”.
The careful demarcation of the disputed areas by colour makes identification of whether a particular location was in one or another ​‘zone’ a great deal easier. Thus, the original full-colour examples are particularly important in facilitating the graphical depiction of the international land disputes of the time.

Popple’s map was both a cartographic landmark and a visual icon among the social elite of the British Colonies. As noted by Bruckner in ​‘The Geographic Revolution in Early America’:

​“British Americans frequently imported imperial maps during the eighteenth century. Decorative wall maps showing British possessions in North America were favourite articles, purchased primarily by the colonial elite. Strategically displayed in formal settings of the home or provincial office, these maps painted bombastic scenes of territorial conquest and signified the range of the British Empire. For example, maps like Henry Popple’s ​‘Map of the British Empire in America’ (1733) reached American audiences upon special orders by the Board of Trade and Plantations, and colonial politicians like Benjamin Franklin eagerly requested Popple’s map for public display”.

Popple issued an announcement for his map in 1731, but did not complete work on it until 1733, shortly after the new colony of Georgia was chartered in London in July, 1732. It is therefore one of the earliest maps to name Georgia. Considered by the British as an important protective buffer between the more densely populated English Colonies in the north and the Spanish in Florida, the new colony was only developed in early 1733, with the landing of James Edward Oglethorpe and his small party of 120 colonials. Oglethorpe returned to England in 1734 and met with the King on July 20, 1734, showing him ​“several charts and Curious Drawings relating to the new Settlement of Georgia”.

The same charts and maps must have been made almost immediately available to Popple, as he incorporated this new information into a corrective paste-down mounted on Sheet 10 in State 3 of the map. The new information regarding Georgia was then engraved onto the map in State 4 published in late 1734, as here – see Babinski, note 12, 13.

The map was engraved by William Henry Toms, and the elaborate title-cartouche by Bernard Baron. However, Popple credits the design of his map to the Channel Islander Clement Lempriere, a military cartographer attached to the Corps of Engineers and later Chief Draftsman at the Tower of London, who subsequently worked on other projects with Toms. In addition to Oglethorpe’s maps, Popple and Lempriere also had access to a number of other important manuscript and printed sources: for the lower Mississippi and the layout of the Great Lakes, Delisle’s ​‘Carte de la Louisiane et du Cours du Mississippi’ (1718); for the Spanish settlements on the Rio Grande and territory west of the Mississippi Valley, Nicholas de Fer’s ​‘La France Occidentale dans L’Amérique Septentrionale’; the southeastern colonies, and uptodate information on Indian settlements in the interior, are based on John Barnwell’s manuscript of about 1721; for New York and the region south of the Great Lakes, Popple used Cadwallader Colden’s ​‘Map of the Country of the Five Nations’.

Despite the evident need for a map such as Popple’s, and his connection to the Board of Trade and Plantations, it was not initially a commercial success. Publication of the map was taken over by William Henry Toms and Samuel Harding in August of 1739, at the outbreak of the War of Jenkin’s Ear, when it eventually found its commercial moment and sales soared. They advertised it frequently in the newspapers, with their last advertisement appearing in July 1745. In 1746, the rights to Popple’s map were sold to Willdey and Austen, who published the map until Austen’s death in 1750 (Babinski, Notes 4–8).

The current example is Babinski’s state 5 or 6: with no imprint on title sheet 17, imprint on sheet 20 reading ​“London Engrav’d by Willm. Henry Toms 1733”, without R. W. Seale’s name.

Henry; and Clement LEMPRIERE Popple 1733, [but 1734]
A Map of the British Empire in America with the French and Spanish settlements adjacent thereto.