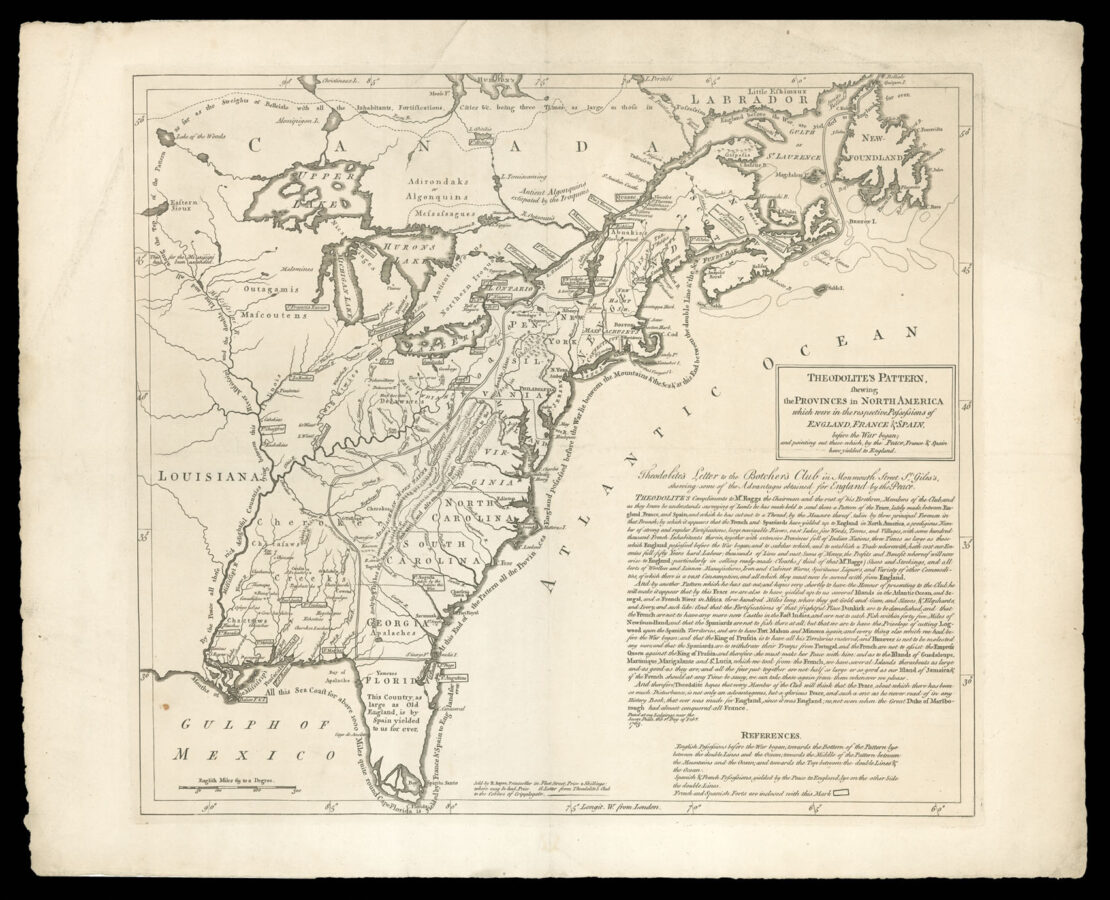 A previously unrecorded satirical broadsheet lampooning the Prime Minister and the division of North America at the end of the French and Indian War.

Theodolite’s Pattern, shewing the Provinces in North America which were in the respective possessions of England, France & Spain, before the War began; and pointing out those which, by the Peace, France & Spain have yielded to England.

The map shows the rearranged territory of North America after the Treaty of Paris, which ended the French-Indian War, the American theatre of the Seven Years’ War. The full text of the accompanying letter was originally printed separately, but can now only be found along with a reduced woodcut copy of the map in ​‘The Universal Museum’, published by J. Payne in April 1763 (McCorkle 736.8 and Jolly, UMUS-14.); copies of this version are held in the British Library and in the Beinecke Library at Yale. Although the French-Indian War was expensive it was supported by the British public, who viewed it as a reversal of the losses suffered by Britain in the War of the Austrian Succession. The end of the war, secured by the Treaty of Paris, divided opinion. The main architect of the treaty was John Stuart, 3rd Earl of Bute (1713–1792). Bute was already disliked: Scottish peers in general were mistrusted, and Bute was also rumoured to have had an affair with the Dowager Princess of Wales, Augusta. The treaty he had made, while gaining Britain extensive territory in Canada and along the east coast of America, allowed France and Spain to keep certain lucrative territories in Central America and the Caribbean, and was not universally well received.

Robert Sayer (1725–1794) was a British publisher and printseller active from 1748. He took over the premises of the printseller Philip Overton, whose widow was married to Sayer’s brother James. In time, he also acquired the stock of Herman Moll, John Senex, John Rocque, Thomas Jeffreys and probably Henry Overton II. His purchases gave him unrivalled access to the products of the best mapmakers and publishers of the age, and he achieved considerable success, immortalised in the painting by Johan Zoffany showing him with his second wife in front of their house in Richmond.

Sayer moved in the same circles as some of the most influential writers and thinkers of the age, including the firebrand John Wilkes (1725–1797), whose newspaper ​‘The North Briton’ had been conducting a war of words against Bute and his policies since June 1762. A denouement came in 1763 when Wilkes attacked a speech made by George III at the opening of Parliament in April endorsing the peace made by Bute. Significantly, Wilkes’ attack was made in issue 45 — 1745 being the year of the Jacobite Rebellion — a deliberate attempt to resurrect the shadows of Jacobinism. Sayer voted for Wilkes in 1768 when he stood as MP for Middlesex (see: http://www.londonelectoralhistory.com/LEH-Database.html), and in 1780 distributed a portrait of Wilkes with the caption ​“Friend to Liberty, a Lover of his King, Opposer of Ministerial Tyranny & Defender of his Country”. Sayer’s political sympathies, therefore, lay firmly with Wilkes and against Bute. The map and text, although purportedly supporting Bute, are actually an extended satire denouncing both the Treaty of Paris and its architect.

The text on the map is taken from the accompanying open letter written from ​‘Theodolite’ to the ​‘Botchers of Monmouth Street’. At first glance, ​‘Theodolite’ appears to be on the side of Lord Bute, outlining the size and potential of the territories gained by the treaty, appealing to the commercial opportunity offered by the integration of the Native American population into the British Empire and defending Bute as a ​“master in that branch [diplomacy]”. ​‘Theodolite’ is probably meant to represent Bute himself, named thus because of Bute’s famous collection of scientific instruments. The reference in the full letter to ​‘Theodolite’ having been a land-surveyor might refer to the fact that Bute spent his early years in the peerage running his estates rather than engaging in politics. The ​‘Botchers’ are probably a play both on the idea of ​‘stitching’ territories together, and on the idea that the only advocates for Bute’s statesmanship were those with mercantile interests or ​‘low’ connections: the Gazeteer and London Daily Advertiser on 30th May 1763 denounced the Address to the City defending the peace as hatched by Bute’s creditors, ​“aided and assisted by the Jews, Apprentices, Clerks, and all the dross of Merchandize”. The text on the map and the accompanying letter are peppered with references to tailors and clothing. ​‘Botcher’ was contemporary slang for tailor, particularly those who altered old clothes; Monmouth Street was known for its second-hand shoe and clothing shops. The full letter is signed by Robert Raggs and Geoffrey Bodkin (a type of needle), and makes reference to one of the ​‘Botchers’ joining Elliot’s Light Horse, a cavalry regiment whose original recruits were popularly supposed to be tailors who were on strike at the time. The ​“Cobblers of Cripplegate” are likewise not a real club. George Colman the Elder, also a friend of Wilkes and Sayer’s, had written under the pseudonym ​“The Cobler of Cripplegate” earlier that year, although he does not seem to have written under that name on the Treaty of Paris, and so the choice of name might have acted both as an in-joke for any readers who understood the satire and the relationships between the people behind it, and also as a suitable pendant to the ​‘Botchers’.

The letter makes it clear that ​‘Theodolite’ and the ​‘Botchers’ are not real, and the defence of the Treaty is actually meant to expose its weaknesses. For example, ​‘Theodolite’ talks of the commercial potential of the Native Americans now under British control who will in time ​“be very good and useful neighbours”; as long as they stop ​“continually robbing, scalping, butchering and murdering our friends and countrymen, who happened to live near them”. The real author was probably either Robert Sayer, or one of the circle of writers called the ​‘London Geniuses’, including Colman, who were all friends with Wilkes. The parody continued with two letters written to the Gazetteer and London Daily Advertiser. The first, published on May 23rd and signed ​“A Friend to Liberty”, says that the map’s readers ​“will be much better qualified for debating on the peace, than all those put together will be who do not”. The ​“Friend to Liberty” is clearly a reference to Wilkes, and a tongue in cheek encouragement to readers to purchase the attack on his enemy. A reply from ​“R.L.” printed on June 7th has a similarly sarcastic advocation of the map, which to him ​“seems to have been drawn by a Scotsman [Bute]”. R.L. points out the mapmaker’s ​“ingenuity in colouring” by ​“spreading a beautiful verdure over all Canada as far north as Hudson’s Bay, with intent doubtless to refute the common notion of the infertility of those regions near the pole, and visibly to demonstrate the superior excellence of the northern countries to those in the south”: a veiled reference to the perceived uselessness of acquired Canadian territories.

​“R.L.” could possibly be Robert Lowther II, younger son of the colonial governor by the same name. Lowther voted in favour of Wilkes in 1763 when Parliament sat to decide whether an MP’s protection from arrest extended to writing and publishing libel (in relation to Wilkes’ attacks on the King and his government in ​‘The North Briton’), and was deprived of his safe seat by his elder brother Sir James Lowther for his independence. He would only have been 22–23 at the time, but he had been an MP himself for Westmorland since he was 18. There were a handful of underage members returned at each election and although their seat was automatically rendered null and void, and they weren’t allowed to speak or vote in the house, their position was never challenged. Robert was not even in Britain during the 1759 or 1761 elections, but still on his Grand Tour. These underage members were normally useful placeholders for pocket boroughs, but Robert was one of the few elected to a county seat, (which prompted threats of a petition against him, but nothing was ever done). On his return to Britain he quarrelled with his brother and was only re-elected in 1763 on the condition that he would resign the seat if he ever voted in opposition to James. It is possible, therefore, that putting his initials to a satirical letter might have been an early sign of the rebellion which caused him to write to his brother in November: “…should a question be put for the expelling of Mr Wilkes from the House of Commons, and nothing new be offered to alter my present opinion, I do fully intend to vote against that measure, and further do I think it my duty while I have a seat in the House of Commons to attend the business of that House and to give my free vote according to the best of my judgement. This, Sir, is my way of thinking, which I suppose you must approve.” Sir James did not approve, especially as he was married to Bute’s eldest daughter, Lady Mary Stuart, and Robert was made to resign. It is worth noting that Lady Mary (who was very unhappy with Sir James, and left him after fifteen years of marriage) was an artist and had intellectual and social links with Wilkes’ circle in London; also, that Robert Sayer published William Bellers’ view of Hawswater in Westmorland in 1753, which was dedicated to Sir James.

The map as a whole is a fascinating insight into the world of political satire in the eighteenth century and the connections between the great literary and political figures of the age. It also demonstrates the depth of popular feeling against Bute, especially given the the correspondence in the Gazetteer continued even after Bute resigned his office in April 1763.

Robert Sayer was a leading London print- and mapseller, mapmaker and publisher, active from 1748 to about 1792. He was apprenticed in the Stationers’ Company, belatedly made free by redemption on 6th September 1748. In January 1747, his elder brother James had married Mary Overton, widow of the print- and mapseller and publisher Philip Overton. It seems likely his freedom coincided with his joining Mary Overton; by 20th December 1748, he had taken over the firm and continued to run it until his health broke down in about 1792.