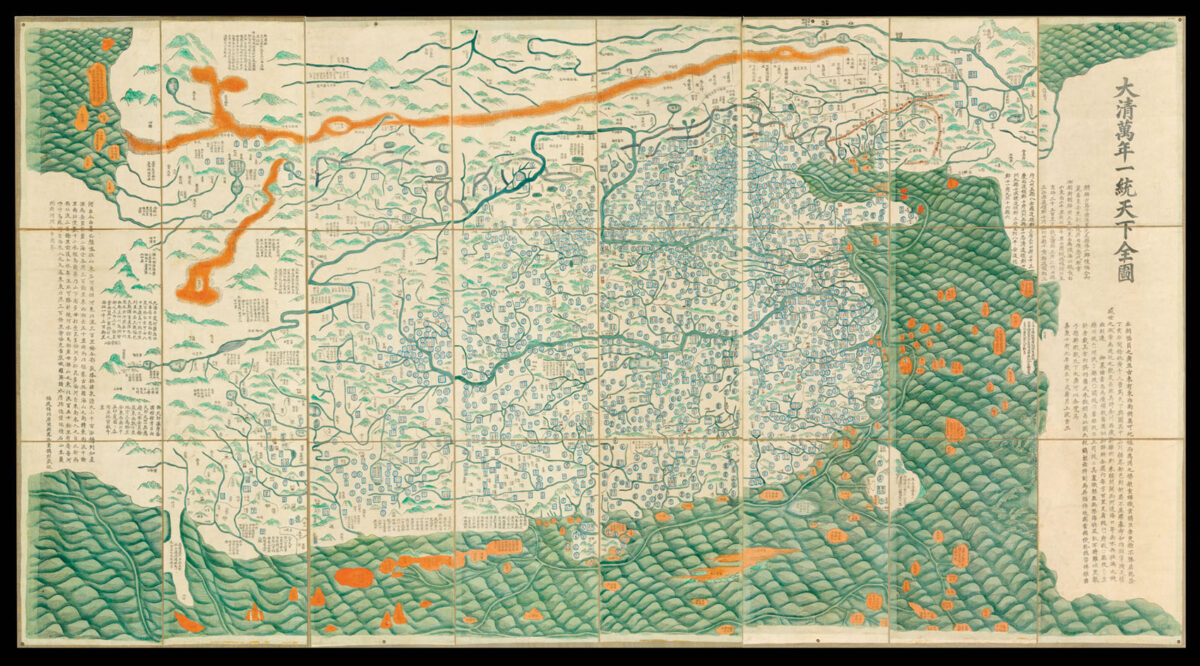 This version of ​“Blue” map was depicted with shades of green and sandstone red, and printed from a later plate based on the ​“Blue” map plates, commissioned by the Fengchitang (鳳池堂) in Minxian County of Fuzhou Prefecture (福州府閩縣) as inscribed in the long end note to the left margin of the map: ​“福建福州府閩縣鳳池堂鐫刻藏板”.

This map is titled Daqing wannian yitong tianxia quantu 大清萬年一統天下全圖 (Complete Map of All-Under-Heaven Unified Everlasting Qing Empire). It is derived from the version by Huang Qianren (黃千人) produced in 1767, to which is added the newly established administrative units in Sichuan, Tibet and Chinese Turkestan, as well as the changes in the river mouths. These details are based on official documents, hence it is more accurate and complete than earlier maps. The map is printed in scrolls to make it more portable.

The scale is ​“100 li” (50 kilometers) to the division, no grid is drawn on the map. The total area covered extends from Korea in the east to Central Asia in the west and from the Heilongjiang river (黑龍江) in the north to the Straits of Malacca (馬六甲) in the south. European countries area drawn as small islands on the left margin of the map.

The map emphasizes the depiction of the Yellow River (黃河), Yangtze River (揚子江), Heilongjiang river (黑龍江), deserts, the Great Wall with its main passes (長城), Taiwan (台灣) and sea routes along the coast. Symbols with colours area used for distinguishing provinces. On the map, mountains, deserts and the Great Wall are presented in elevation, and sea is represented with corrugations.

In terms of visual differences, the texts and patterns on the ​“Blue” map were engraved in order to appear white on the print, which in the current version are in black ink, suggesting they were either left in relief in the engraving, or later painted and written by hand, as the lines and calligraphy appear much finer. Employing Tianxia 天下 (All-Under-Heaven) used on the original map made by Huang Qianren, instead of the Dili 地理 (Geography) in the title imbues it with a stronger political sense, and potentially signifies the patron’s wish-fulfilment.

At the end of the foreword written underneath the title, gives the exact date (lunar calendar) of the print, which is the first day of the chrysanthemum month (September) in 1814, the nineteenth year under the reign of Emperor Jiaqing 嘉慶 (1760–1820, r. 1796–1820):
嘉慶十有九年歲在甲戌菊月上浣吉旦

Aside from the colour, other differences appear in the depiction of the waves, the colours of the houses and the formatting of the longer texts.

We are unable to trace any other example of the present map, which forms an intermediate state between the previously known first and second states of the map.