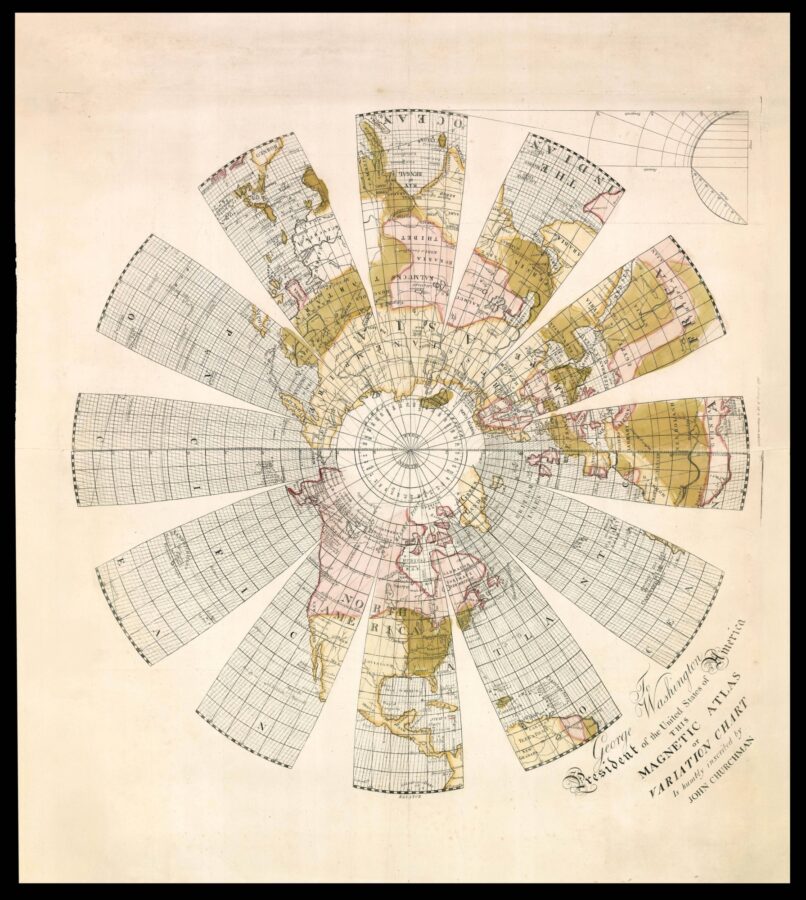 John Churchman (1753–1805) was an American mathematician, surveyor, mapmaker, and self-propagandist who held the official post
of surveyor for Chester, Delaware and parts of Berks and Lancaster Counties, Pennsylvania. He first came to prominence for his ​‘Map of the Peninsula between Delaware & Chesapeak Bays’ (1778).

Some time in the mid-1780s Churchman became consumed by the problem of finding longitude at sea, which had challenged navigators for centuries. The search was given impetus in 1714 by the creation in London of the Board of Longitude, charged with assessing proposals and empowered to award a staggering prize of £20,000 (the equivalent of over £2,000,000 today) to whomever came up with the first viable method accurate to within 30 seconds over a voyage to the West Indies. The award ultimately went to John Harrison for his extraordinary chronometers, but in late eighteenth century America these were rare and expensive instruments, far out of the reach of ordinary mariners.
Churchman developed the theoretical underpinnings and methodology for an entirely different solution. His basic premises were that the two magnetic poles could be located precisely, that on any meridian linking those poles magnetic variation was the same at every point, and that over the centuries the magnetic poles rotated at a constant rate around the geographic poles. If these premises were true, a mariner need know only his latitude and the local magnetic variation of the compass to ascertain his longitude with accuracy.

Unfortunately for Churchman, his method was theoretically unsound; not only do the position of the magnetic poles vary randomly over time, but the lines of equal variation do not run in straight lines. Churchman’s method was also practically flawed, as change in magnetic variation is difficult to measure with precision by use of compass on an unstable vessel at sea.

An aggressive self promoter, Churchman communicated his method in both the United States and overseas to luminaries such as Benjamin Franklin, Thomas Jefferson, Joseph Banks, and learned bodies including the American Philosophical Society, the Royal Academy of Sciences (France), and the Board of Longitude itself.

Responses to his work were somewhat mixed, Thomas Jefferson, although welcoming his work, raised two practical objections:
​“1st, a ready and accurate method of finding the variation of the place; 2d, an instrument, so perfect as that (though the degree on it shall represent 160 miles) it shall give the parts of the degree, so minutely as to answer the purposes of the navigator.“

Others were more strident in their objects. John Macpherson (1726–1792), a Philadelphia resident Scottish privateer, during the French and Indian War who, according to John Adams had ​“an arm twice shot off ” remarked:

​“While I’ve a pen, and GOD keeps me alive, The canting, thieving, Churchman shall not thrive“

Macpherson, who was a rival to Churchman for Congress’ financial affections in funding discovery of ​“a concise, plain and easily practicable mode of ascertaining the Longitude” was forthright in his opinions as to Churchman’s abilities. In the New York Packet on 29 September 1789 he wrote:
​“Mr John Churchman, you are entitled to no lenity from me: Therefore, in a future address, I shall tell you every page, and every line, from which you stole the words which contains your declarations about longitude“
Even with these strident criticisms, Churchman had, by 1790, received enough encouragement from his correspondents that he felt emboldened to gloss over the objections and publish a remarkable map along with an explanatory pamphlet.
The Magnetic Atlas and the Explanation
The Magnetic Atlas is a most ambitious production for an American map of the period. Its sheer size, the unusual projection, and the clarity and refinement of the engraving render it striking in the extreme.
The map depicts the northern hemisphere on a north polar projection and consists of twelve gores which, if assembled, would yield a globe just over 15 inches in diameter. The north ​“Magnetic Point,” or Pole, is shown at its supposed 1790 location in Baffin Bay, with the ​“Magnetic Orbit” a concentric ring around the geographic North Pole. Latitude and longitude are indicated by solid lines at one-degree intervals, while ​“magnetic meridians” emanate from the Magnetic Point as dotted lines intersecting the geographical meridians at angles corresponding to the magnetic variation. Though rather beside the point, the geography itself is relatively up to date, and includes the Treaty of Paris boundaries of the United States as well as the findings of Cook’s exploration of the northern Pacific. The title block begins with a prominent dedication to ​“George Washington President of the United States of America,” then in his first or second year of office.

The map is accompanied by ​‘An Explanation of the Magnetic Atlas’, a small pamphlet explaining the map’s theoretical background, describing its construction and use, and engaging in speculation on the causes and effects of magnetic variation. The Explanation also indicates hat Churchman’s method received a surprising amount of approbation, both at home and abroad. The text is preceded by a list of nearly 300 subscribers, including many representatives of America’s political, intellectual, religious and business elite, among them Adams, Jefferson, Hamilton and Franklin.

Churchman’s correspondence with the Board of Longitude endured from 1787 through 1804 and is preserved to this day at the Royal Greenwich Observatory.

​“Churchman must rank as the most persistent of all the investigators who studied the problem of finding longitude by variation; [however] his efforts were, from the outset, doomed to failure, and the Board of Longitude at no time seemed to be willing to grant him financial support…” (Cotter, 218)

Churchman does seem to have received considerable recognition elsewhere, both in America and abroad. The U.S. Congress repeatedly passed resolutions expressing strong approbation, though it rejected his petition for funding for a voyage to Baffin Bay to gather evidence confirming his theories.

The Magnetic Atlas is extraordinarily rare. The present example is remarkable in that the map appears to have been separately issued (in some surviving copies it appears to have been issued bound in to the Explanation as a frontispiece. This has caused considerable bibliographic confusion, and institutional cataloging of the pair is somewhat erratic). We are aware of only eight American institutions holding examples of the map (The American Philosophical Society, Boston Athenaeum, Clements, Harvard, Historical Society of Pennsylvania, Library of Congress, Massachusetts Historical Society, Yale). Harvard, Massachusetts Historical and possibly the Library of Congress hold multiple impressions. To this we can add an example at the British Library, and a single example in private hands. The pamphlet is significantly more common: there are examples at a minimum of 14, and Rare Book Hub identifies six having appeared on the market since 1964.

An expanded second edition with new maps of the northern and southern hemispheres appeared in London in 1794, with a third edition issued in New York in 1800. The New York edition replaced the original Magnetic Atlas with a double-hemisphere world map.


Presented to the American Academy of Arts and Sciences by the Author, Cambridge MA, in 1791.