A plan of Rio de Janeiro by the Comte de Breteuil, the last prime minister of pre-revolutionary France, together with one of the earliest manuscript prospects of the city

A detailed map of Rio de Janeiro made in 1757 by the Comte (later Baron) de Breteuil, together with a prospect of the city, sacked by a French corsair in 1711.

Louis Charles Auguste le Tonnelier, baron de Breteuil, baron de Preuilly (1730–1807) was a French aristocrat, diplomat and statesman. He was the last Prime Minister of France to serve under the Bourbon monarchy, appointed by Louis XVI only 100 hours before the storming of the Bastille.

Breteuil was born in 1730 at the château of Azay-le-Ferron into a well-connected aristocratic family. He was educated in Paris before joining the army, where he served under Thomas Arthur, comte de Lally, baron de Tollendal (1702–1766) in his ill-fated command of the French forces in India during the Seven Years’ War against England. With orders to join the French forces in India, Lally and Breteuil sailed from France on 2 May 1757 under the command of Vice Admiral Anne Antoine, Comte d’Aché (1701–1780). During the voyage, an epidemic forced the fleet to put in at Rio de Janeiro for six weeks. The Portuguese, neutral in the conflict between France and England, initially refused access to the city. This, quite possibly, was a result of the fact that the French had sacked Rio in 1711 under René Du Guay-Trouin, a former corsair who took the supposedly impregnable city with a force half the size of the defending garrison. It is likely that the present plan and prospect were drawn up during this hiatus, perhaps in contemplation of emulating Du Guay-Trouin’s previous exploits. Indeed, the text states that the map is based upon a plan made during the expedition of ​“Mr Duguay”, together with corrections. It also indicates that the plan was made in conjunction with a prospect of the city (presumably the accompanying view offered here) and states that the plan and its companion view may be relied upon as accurate.

The plan is titled ​‘Plan of the Rio de Janeiro Bay and its Defenses’, and is signed in at the bottom right ​“Breteuil fecit”. A manuscript legend towards the right of the plan lists the following:
1. The City; 2 The Benedictines; 3. Fort St Sebastien; 4. The Parish City; 5. The Jesuits; 6. The Franciscans; 7. The aqueduct; 8. Fort Mercy; 9. Island of the goats and snakes; 10. Bishop’s residence; 11. Fort Conception; 12. Aqueduct; 13. Submerged sand bank; 14. Island and fort of the city of Gagnon; 15. The harbour; 16. Island and Fort Delage; 17. Fort St Jean; 18. Fort St Theodore; 19. Fort Santa Cruz; 20. Battery Delapre Vermek; 21. Submerged sand bank; 22. Chapel and Battery of Notredame of her travels; 23. Battery; 24. Oil Manufacture of Baleine Pt Leroy.
The prospect, or view, is itself inscribed ​“realised for the Comte de Breteuil”, thereby reinforcing the pairing of the two images, and the text towards the lower right of the image remarks: ​“This Bay has 8 deep- water anchorages. Two link the Fort Santa Cruz to Rio de Janeiro. Our troops and our crew are camped in San Domingo, which faces that city. This view is busy with our vessels. The parts that went imperfectly have been corrected while travelling through the Bay, placing here objects that perspective wouldn’t admit.“

Inside a large text box at the lower right, the following are identified:

Correa do Lago includes a chapter dedicated to drawings and watercolours in his catalogue of the collection of Olavo Setuval. In this he describes a 1760 prospect of the city by Blasco (‘Propescto da cidade do Rio de Janeiro vista da parte norte da Ilha das Cobras’) as ​“the most detailed and complete panorama of the eighteenth century”. The present drawing predates Blasco’s work by some three years. The next oldest prospect in the Setuval collection is dated 1795. Furthermore, no comparable prospect can be found in the Coleção Brasiliana Fundação Estudar (part of the Oscar Americano collection). 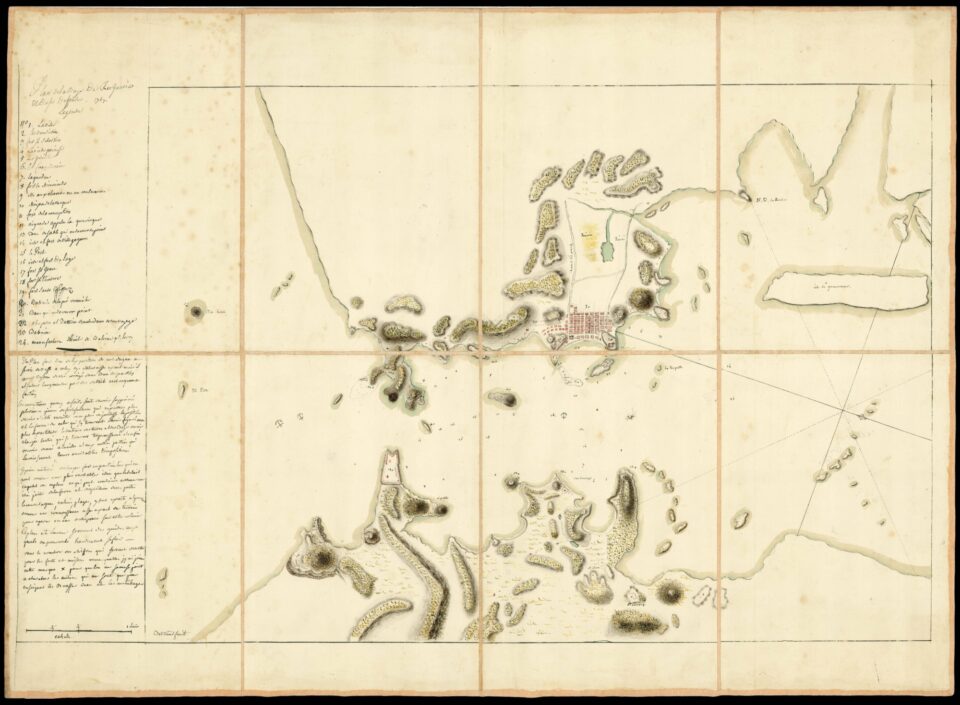