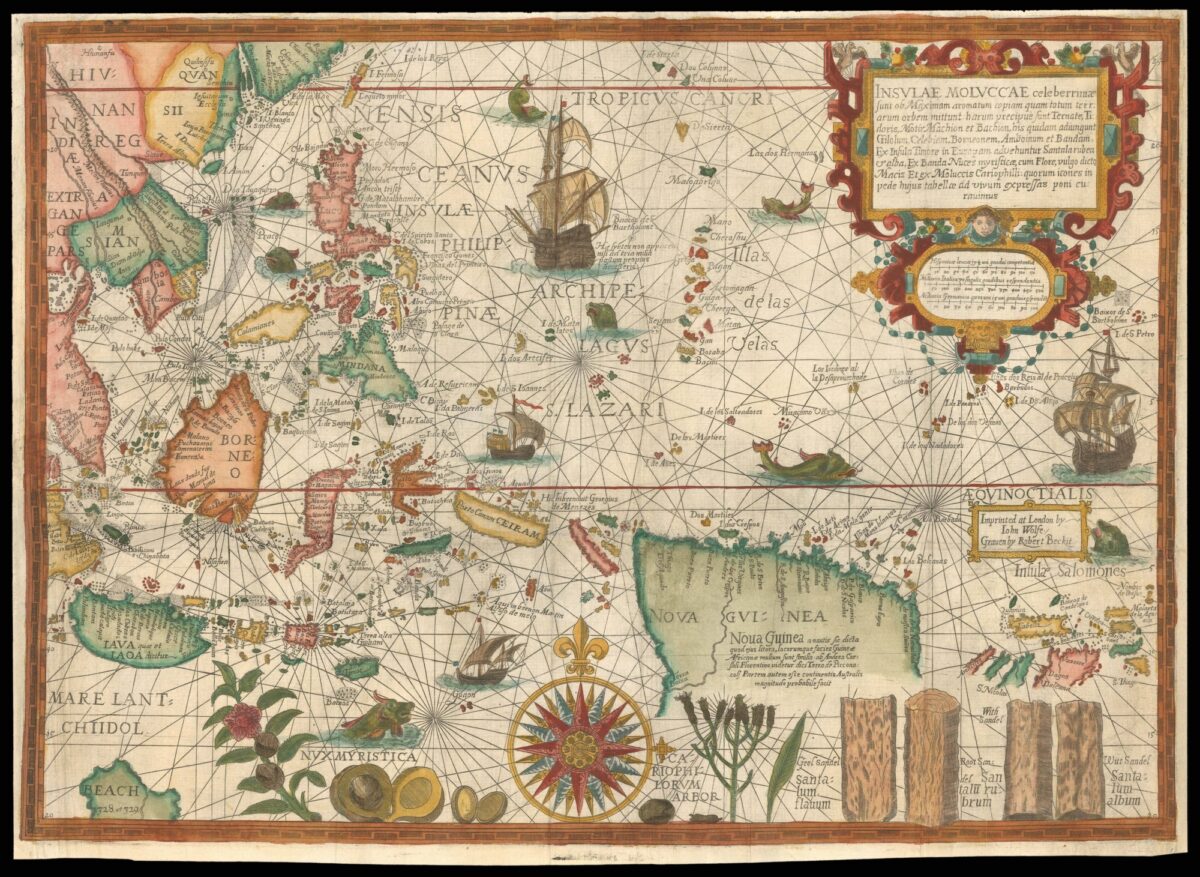 A pirated map of the Spice Islands

A rare English print of Petrus Plancius’ seminal chart of the East Indies. The chart was instrumental in helping the Dutch break the Portuguese monopoly on the spice trade in the East Indies.
Following the successful Dutch rebellion against their Spanish overlords in 1579, the Dutch struck out to take a share in the lucrative trade in spices from the Far East. In 1592 Petrus Plancius, a cartographer and Flemish minister in the Calvinist Reform Church, sponsored a covert mission to obtain confidential Portuguese manuscript charts from Lisbon. The Houtman brothers, Cornelius and Frederick, acquired 25 manuscript charts by the Portuguese cartographer, Bartolomeu Lasso, from which Plancius compiled this map; engraved by Johannes Doetecum. It was first published as a loose sheet in 1595, but it was also bound into some copies of Linschoten’s ​‘Itinerario’.
Cartographically the map is a huge improvement on previous printed maps of Southeast Asia with the Sunda Islands, the Moluccas, and much of the mainland coast well-delineated. The large islands of the Philippines, such as Luzon and Mindanao, are well-drawn, and although the cluster of islands between them are crude, they are at least well placed and correctly named. Palawan is confused with the ​“Calamianes” a group of small islands to its east. To the southeast, a vast New Guinea has been tentatively assigned to a theoretical southern continent; Plancius confuses its west coast, present-day Irian Jaya, with the island of Seram (Ceriam), upon which he places the the Guinean port of ​“Canam”. This confusion was to be compounded by Linschoten a year later and was depicted by Rossi on his map of 1680. On the mainland the fictitious transpeninsula waterway is shown, as is a phantom lake, dotted with islands, west of Siam. Plancius curiously omits Singapore. At the bottom of the map he depicts the various commodities that the islands have to offer — the key to any prospective Dutch investor. These include cloves (Caryophilorum Arbor), nutmeg (nux Myristica) and red and white sandalwood (Santulum): sought after for their culinary and medicinal properties.
This English edition was engraved by Richard Beckit for Jan Huygen van Linschoten’s ​‘Discours of Voyages into ye Easte & West Indies’. It was printed by John Wolfe, who had become notorious during the late 16th century for his ​‘Machiavellian devices’, namely pirating the work of other publishers. He produced Latin grammar books, Bibles and versions of the Book of Common Prayer, whose printing rights belonged to others, and was continually refused entry into the Stationers’ Company until 1583, when he is said to have reformed his behaviour following a raid on his premises. While he may have ceased exploiting the work of his fellow English printers, he nonetheless continued his pirating activities, producing the present map towards the end of his career in 1598. When published, Linschoten’s book of naval charts enabled the British and Dutch to break the Portuguese monopoly over the spice trade in the East Indies. 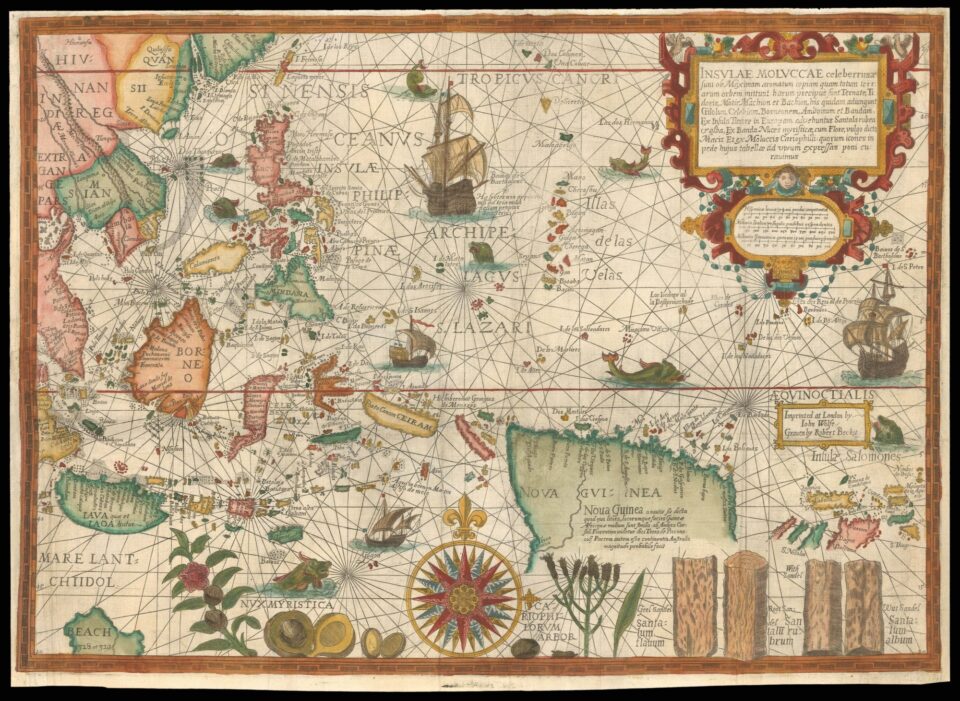