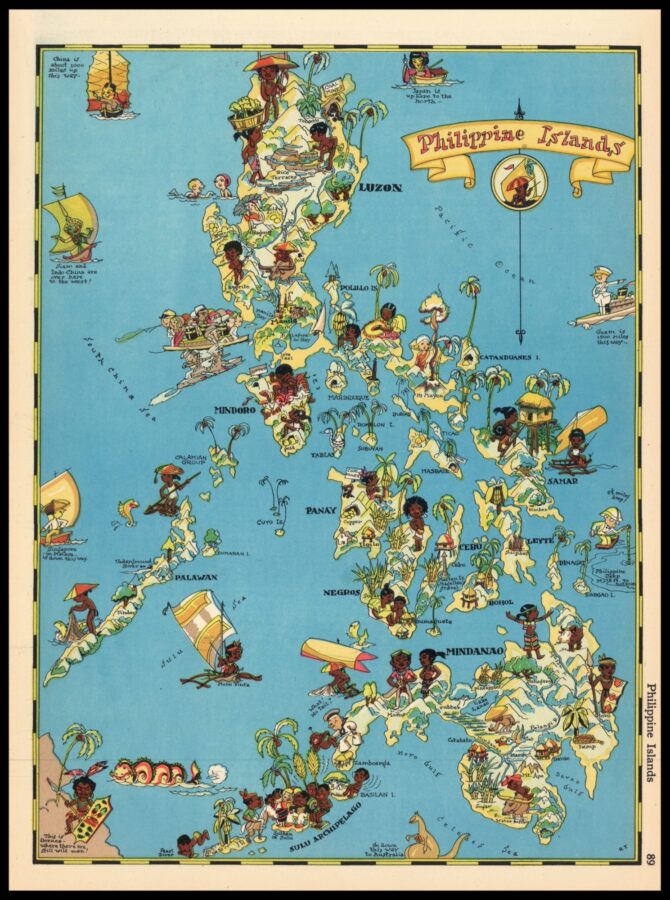 A pictorial map of the Philippines

An amusing pictorial map of the Philippines, depicting the locals and their Western visitors, along with the islands’ natural resources, industries, customs, architecture, and monuments.

This map appeared in ​‘Our USA: A Gay Geography’ — a pictorial atlas that consisted of 55 maps showing US states, territories, and other places of interest, such as the Panama Canal and the Caribbean. The Philippines, under U.S. control from 1898–1946, was naturally included. Ruth drew the maps for the atlas while her brother, Frank, penned the descriptive texts. A product of her time, she provides a stereotypically exotic view of the islands, complete with a cock fight, a pearl diver, and many loin cloths, which were not, in fact, the fashion on the long-since colonised islands.

Ruth Taylor White, born in 1899, was one of the most prolific and popular makers of pictorial maps in America from the 1920’s to 1940’s. After attending East Coast art schools, marrying, having two children, and then divorcing, she moved from Phoenix, Arizona to Northern California’s Bay Area. Once there, with a little help from her brother Frank, an established journalist, she began to find work as an illustrator, and she quickly built up a reputation, not to mention a successful career, for her comic pictorial maps. Her style is characterised by bright colours, lots of figures with cartoon-like large heads, and a focus on humour rather than accurate geography.