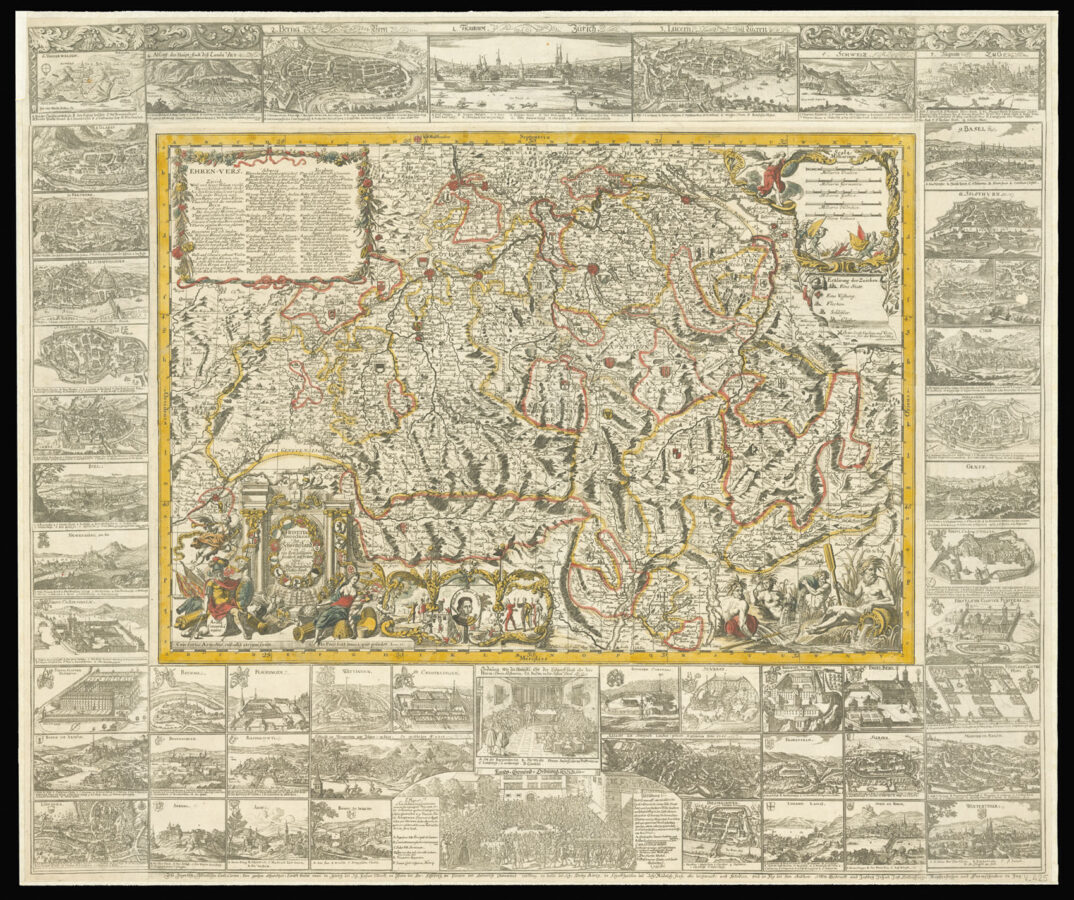 A patriotic map of Switzerland

A fascinating item showing a patriotic view of Swiss heritage in the dying years of the Old Confederacy. Little is known of the mapmaker, Johann Georg Bodenehr (1631–1704), save that he was from a family of engravers and publishers working in Augsburg. The map itself bears an elaborate title cartouche with a wreath incorporating the arms of the cantons, supported by personifications of war and peace. The inscription underneath is taken from Luke 11:21: ​“Cum fortis armatus custodit atrium suum, in pace sunt ea quae possidet”, or ​“When a strong man armed keepeth his hall, his goods are in peace”. To the upper left is a table providing information on each canton, with a key below. To the right of the cartouche is a cameo of William Tell, the fourteenth century Swiss folk hero, with four scenes from his life. From left to right, the pictures show the famous incident in which he was challenged to shoot an apple off the head of his son with a crossbow by a despotic local ruler; his subsequent imprisonment and escape; his assassination of that ruler with the same crossbow; and finally, his acclaim by his countrymen.

The large border surrounding the map contains 52 views of Swiss towns and villages. There are two depictions of climactic battles in the history of the Swiss Confederacy: the Battle of Morgarten in 1315, in which the Swiss defeated a larger and better organised Habsburg army; and the Battle of Sempach in 1386, which broke Austria’s hold on Swiss territory permanently and which is seen as a milestone in the formation of the Swiss nation. The Battle of Sempach inspired so many commemorative songs that there is a whole genre in Swiss music called Sempacherlied. The achievements of these battles are represented at the centre of the lower border: the Swiss system of government, comprising the federal diet at the top, at which each of the cantons were represented, and a local council shown underneath.

The Swiss cantons formed a confederation during the fourteenth century, and successfully fended off invasion while maintaining neutrality during the long wars which racked Europe. Towards the end of the seventeenth century, however, a treaty of protection with France and internal religious conflict weakened the confederacy, and this pattern continued until it was eventually invaded by Napoleon in 1798. The map itself was issued around 1698, but the border of views was added in a later edition printed around 1770.
This implies that the original map, already patriotically decorated, was reissued with a border which showed further evocative incidents of national pride. The warning inscription beneath the title cartouche suggests an attempt to remind the warring cantons of their shared history, and their rapidly decreasing independence.

We have only been able to trace one institutional example of this edition of the map in Basel University Library, although Zurich and Bern University Libraries have copies of the c.1698 edition.