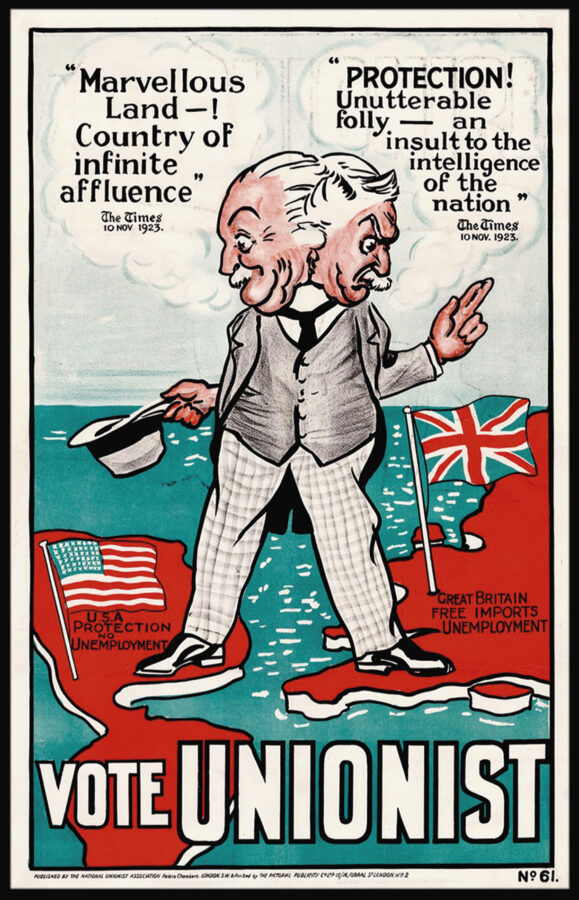 By THE NATIONAL UNIONIST ASSOCIATION, 1924

The poster depicts David Lloyd George, leader of the Liberal Party, in 1924. He had previously been the Prime Minister of a Conservative-Liberal coalition during the war and kept much of that coalition with the Conservative party in order to win the 1918 election, which he did. The coalition had broken down by 1922, and Lloyd George had mended his fences with the other Liberal politician H.H. Asquith. In the 1924 election a reunited Liberal party ran against the Conservative party, led by Stanley Baldwin, which was advocating tariffs on imported goods. Free Trade had been a British policy for most of the Victorian and Edwardian area, especially within the Liberal party.

This Conservative poster quotes David Lloyd George’s opinions on protectionism and the dynamism of America, when interviewed by The Times newspaper and makes the point that the USA have high tariffs and lots of employment, whilst the UK has no tariffs and unemployment.