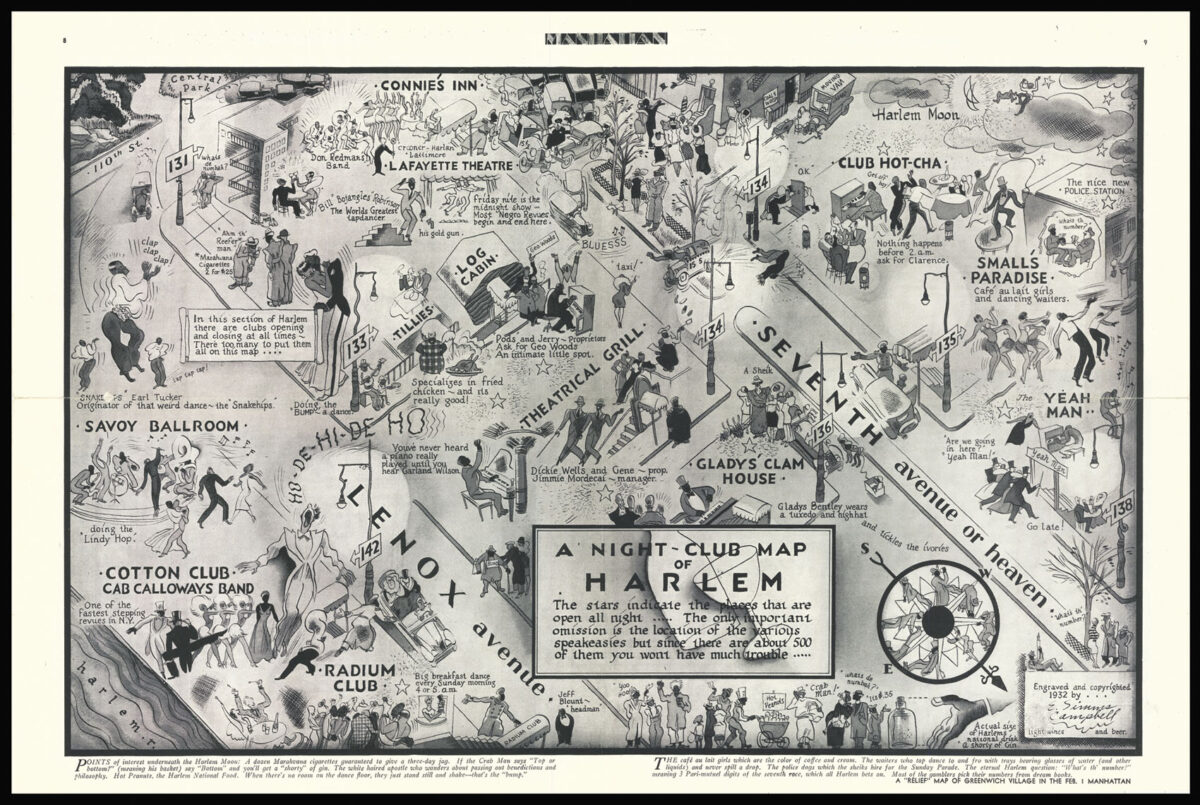 A Night-Club Map of Harlem The stars indicate the places that are open all night. The only important omission is the location of the various speakeasies but since there are about 500 of them, you won’t have much trouble.

To succeed in a white-dominated society, Campbell, the first nationally-prominent African-American cartoonist, rarely used Black themes in his drawings. But he had close ties to Harlem’s cultural ​“Renaissance” and this map was his most important early Black-related work, forgotten for decades because it appeared in the first issue of an obscure magazine for Manhattan night-owls which failed in a month.

The map itself, embellished with numerous small cartoon vignettes, illustrating a wide range of Harlem street scenes including ​“he Reefer man”, selling ​“Marihuana Cigarettes, 2 for $25”; highlights the Cotton Club with Cab Calloway’s band ​“one of the fastest stepping revues in New York”, the Savoy Ballroom, Lafayette Theatre; ​“Bill ​‘Bojangles’ Robinson, the world’s greatest tap-dancer”, the Theatrical Grill, Gladys’ Clam House, the Radium Club, ​“Big breakfast dance every Sunday morning, 4 or 5 A.M.”, the ​“Yeah Man!”, and other establishments in the vicinity of Lenox and Seventh Avenues.

The map is replete with local slang, from praise of musicians like pianist Garland Wilson to insider tips — ​“Nothing happens before 2 A.M. Ask for Clarence” convey a sense of intimate knowledge which must have appealed to white New York socialites who frequented Harlem hot spots for chic entertainment. While resurrected by reproduction in the 1976 autobiography of Cab Calloway – who asserted that Simms’ art provided ​“a better idea of what Harlem was like in those days that I can give you with all these words”.

Rare: only two institutional examples are recorded one in the New York Public Library — who exhibited the piece in 1993; and the other in Yale University Library. We are only aware of one other example coming up for auction in the last 25 years.