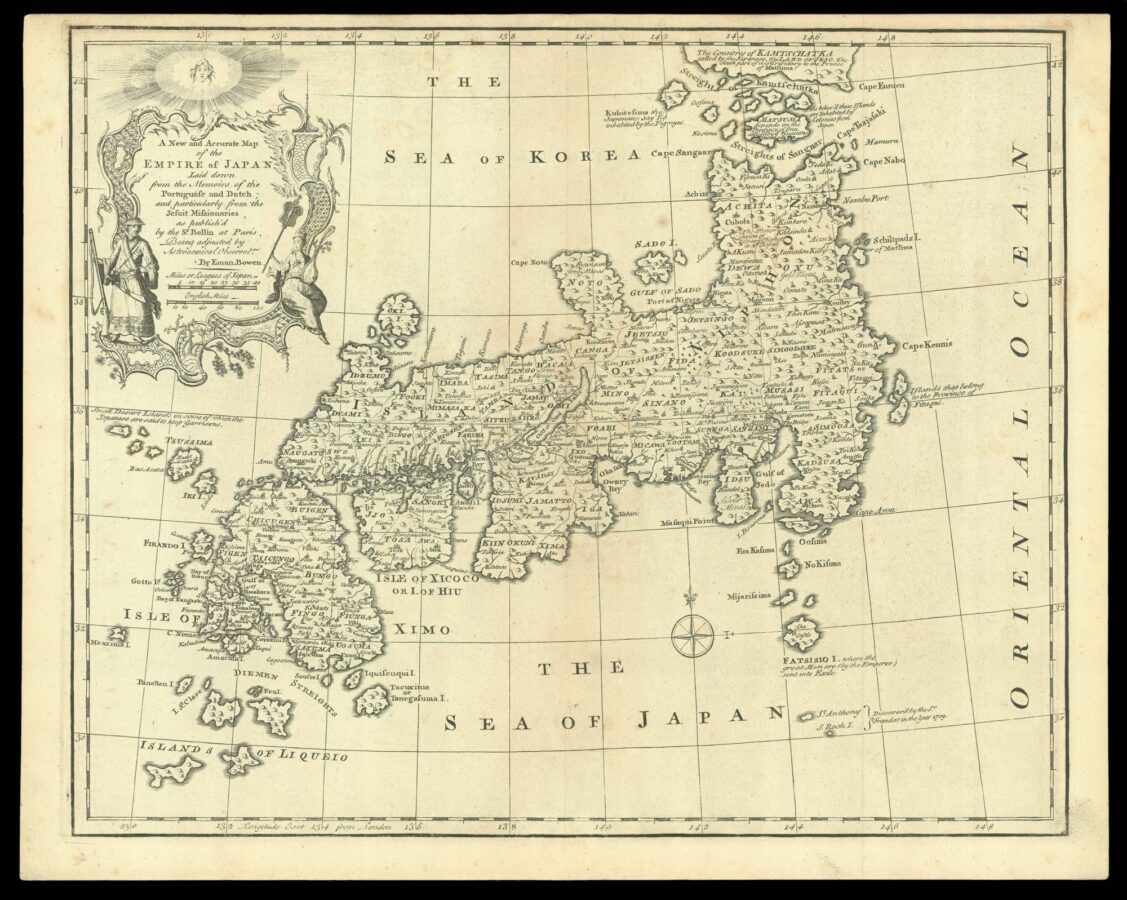 A New and Accurate Map of the Empire of Japan

By BOWEN, Emanuel and BELLIN, Jacques-Nicolas, 1766

A New and Accurate Map of the Empire of Japan. Laid down from the Memoirs of the Portuguese and Dutch; and, particularly from the Jesuit Missionaries, as publish’d by the S.r Bellin at Paris, Being adjusted by Astronomical Obserat.ns

The third state of the map, published in Bowen’s ​‘The Maps and Charts to the Modern Part of the Universal History’. The map identifies provinces, towns, islands, lakes, mountains, and many other details. Several annotations note the recently discovered islands, colonial details, etc.

A Complete System of Geography…‘, 1747. As Bowen states in his title cartouche, his map owes much to that created by Bellin from Kaempfer for the first edition of Charlevoix’s ​‘Histoire et Description Generale du Japon;…’, 1736. Bowen has even copied Bellin’s elaborate cartouche, but has adjusted the longitude coordinates which extend from 130 ‑148 degrees east, from London. These may be the adjusted ​‘Astronomical Observat.ns’ referred to by Bowen. The map also extends a bit further south than Bellin’s, where there are two ​‘Islands of Liqueo’ in the south-west and another two small islands south of ​‘Fatsisio I’ nambed ​‘St. Anthony’ and ​‘S. Roch I.’, with a note that they were ​‘Discovered by the S.r Frandat in the year 1709’. This example is distinguished from the first and second issues, by the absence of ​‘No. 80′, lower right, and of ​‘No. 42’, lower left.

Bowen (1693/4–1767), was an engraver, map and print-seller, apprenticed to fellow Welshman Charles Price in 1709. While working for Price, he engraved maps for George Willdey’s ​‘Atlas of the World’, 1717. By 1720, he had established himself ​‘next ye King of Spain in St. Katherines’. He became one of the leading map and print-sellers and engravers of eighteenth-century London. In turn his apprentices included Thomas Kitchin and Thomas Jefferys, both became celebrated mapmakers.